iPhone 13 in Green and iPhone 13 Pro in Alpine Green Reviews: A 'Saturated' but 'Subtle Statement'

The first reviews of Apple's newly-introduced Green and Alpine Green color options for the iPhone 13 and iPhone 13 Pro have now been shared by various media outlets and YouTubers, and the general consensus is that the new shades are very saturated compared to similar colors from other smartphone makers. 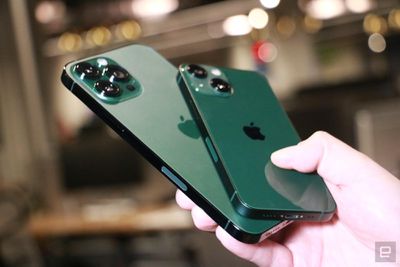 The iPhone 13's green color is glossy, like the rest of the color options, and looks more like a camouflage green to my eyes. It's as dark as the photos on Apple's website look, but perhaps slightly more vibrant.

As with the rest of the color options for the iPhone 13 Pro and 13 Pro Max, Alpine Green has a matte finish to it. It's a lighter version of camouflage green. I can't decide which color I like more, Sierra Blue or Alpine Green.

The new green shades are better than the green color offered by the S22, according to Allison Johnson.

The regular green on the standard iPhone is a little more saturated, more Kelly green than I was expecting. It also makes the Apple logo stand out more than I like. Alpine green is a bit softer and more muted. And sitting side by side by side, they both make the green S22 look much less green than I thought it was and more of a deep blue-green.

In any case, a green phone just looks different, but not in an attention-hungry kind of way. It's a subtle statement, something that makes you wonder about the person carrying it...

Anyway, the iPhone 13 Pro is the current best green phone, followed by the standard iPhone 13, and the Galaxy S22 ranks third.

The Midnight Green of the iPhone 11 Pro was better than Apple's new offerings according to Cherlynn Low.

All of Apple's other colors are included, including Black, White, Blue, Green, and (PRODUCT)RED. In the United States, the price is $699 for the mini and $999 for the Pro. The pre-orders of the ‌iPhone 13; and ;iPhone 13 Pro; in Alpine Green opened earlier today.