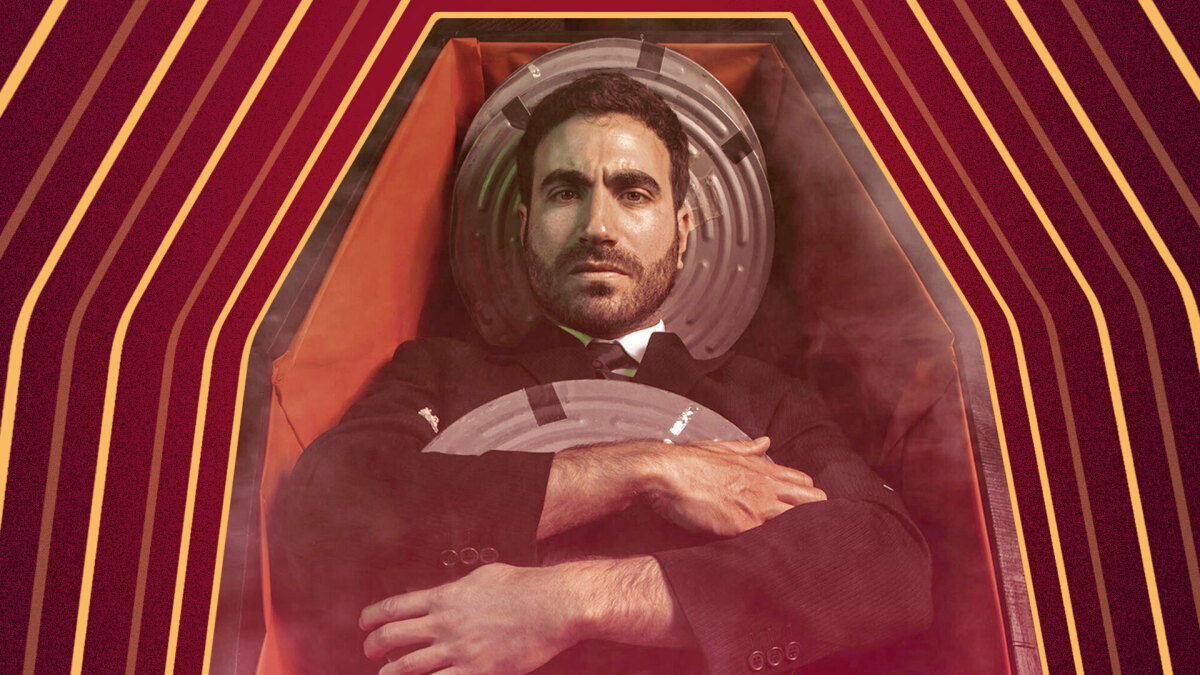 One random Wednesday last August, a writer, a comedian, a film scholar, and an all-around savior of humanity called Brett Goldstein unexpectedly saved me from yet another pre-dawn spiral.

I woke up at 4 a.m. and immediately grabbed my phone and began scrolling through the social networking site, where my eyes zeroed in on two words. I had been meaning to check out the new episode of Films To Be Buried With since it was announced by Goldstein. I smashed play before I read the rest of thetweet or learn what the episode was about. I needed a distraction and the thought of him talking about one of my favorite films for an hour sounded idyllic. I prepared for a relaxing discussion about a boy who befriends an orca by keeping the speaker to my ear and lowering the volume on my phone. Instead, the two of them started a conversation about death.

Films To Be Buried With has a delightfully unique, albeit morbid, premise. He asks famous actors, directors, comedians, and other prominent figures in entertainment how they think they will die, if they fear death, and if they believe in some sort of afterlife.

Films To Be Buried With heaven is a place where all your favorite things are present and everyone is obsessed with cinema. He talks to his guests about the most formative, memorable, impactful movies in their lives through his list of thought- provoking questions.

I heard Ucan talk about the death anxiety she has had since she was a child, the rapidly rising global death toll, and the feeling that danger was around every corner on the first day of August.

She had a name for what she was experiencing.

Death anxiety is brought on by contemplating death, the process of dying, and all mortality-related unknowns. Cambridge University published a study in 2020 that found that death anxiety around the world has increased in the wake of the Pandemic.

I heard my own fears about mortality for the first time. It was a topic that terrified me, yet I was comforted by the fact that people spoke openly about it. In the weeks following that early morning listening session, I started taking three walks a day and consuming Films To Be Buried With episodes in 15- to 20-minute chunks. I fell in love with the show and kept going until I got to all 182 episodes.

I found the discussions about mortality to be funny, from critically acclaimed classics like The Godfather and The Texas Chainsaw Massacre to lesser-known films like The Muppet Christmas Carol and Grease 2.

Hearing others talk about death anxiety and afterlife uncertainties made me feel less alone in my fears. More and more people I knew contracted Covid, listening to Films To Be Buried With became a surprising act of self-care.

If only for an hour a day, listening to artists discuss their own death scenarios helped me get out of my head.

I think about death more than a person probably should because I am an overly-cautious child who has always watched too much television. I do my best to avoid perilous situations, but I still worry about everything outside of my control, such as car crashes, being attacked, getting shot, and the Ryan Murphy series 9-1-1.

There is something about making light of a death that takes away power. In an early episode, Ricky Gervais imagines he meets death while trying to avoid a comedy ending like a safe falling from the sky. He fell onto a spike that pierced his rear and exited through his mouth. It was brutal. Sarah Snook dreams of dying a hero so she can save the planet. The thought of death made me laugh.

Others force me to think about mortality in a more realistic way. Actors Toheeb Jimoh and Yvette Nicole Brown claim to have had dream deaths. There are a number of very real and realistic scenarios, from getting pushed into the path of an oncoming train to dying from a broken heart, which is apparently a real thing that can happen. Many of us fear dying in an aviation catastrophe.

'I can't worry about dying and worry every single day about living…I have to just let one of them go,'" she said. "So I put all of my energy and worry into living."

My views on death were changed by another guest. In March of last year, actor, comedian, and living angel Nicole Brown told the interviewer that she used to think about how she would die a lot.

She said she stopped worrying about it.

We had Donald Trump for a while, and there have been racial unrest here, as well as many other things. She said that she had to let one of them go and put all of her energy into that.

It was simple, yet profound. Death is inevitable and worrying about how it will happen takes a lot of energy that could be better spent.

The uncertainty of what happens after death has been in the back of my mind for a long time, and I have never let myself sit and think about it. I have imagined it all.

Several guests on the show believe that death is over and that there is no afterlife. They don't think eternal life is an option because it would come with boredom, unhappiness and eventually discontent.

Gervais doesn't believe in heaven and hell. I think it is finite and beautiful. We don't live again. 400 trillion to one is the chance of us being here. That is incredible.

Some people don't care if there is an afterlife. They wonder if they are living their best life on Earth. PeteHolmes reminds people of the futility of waiting for something better. This is it. And it is enough.

It would be foolish to assume that there is nothing else out there, since some, like Jenkins and Snook, aren't quite sure what awaits us. Brown and Ted Lasso star Hannah Waddingham is certain that there is an afterlife.

Brown says that he doesn't know how to live his life without believing that there is a grander plan for all of us.

For the body to break down, that energy has to go somewhere.

It has been enlightening to listen to talented people who I respect and admire discuss important ideas that are rarely discussed in interviews. Hearing some of them place faith in an afterlife gives me more comfort in my doubts. Listening to artists talk through ideas, articulate their own confusion, and share their personal beliefs is both calming and compelling.

Wisdom is not limited to the Pod. In an episode of Ted Lasso Season 2, the team attends a funeral and lots of my favorite characters opine on their mortality. Roy Kent is a character that is initially kind of dick about it all, but later hits us with a truth bomb.

Roy spent a year praying that he could just talk to his granddad once or see him one more time, like Obi-Wan.

Films To Be Buried With is a fun, uplifting, genuinely insightful podcast about films, life, and, yes, death. I started listening to it at 4 a.m., because I adore movies and the host. The discussions about death are relatively brief and almost always with a joke, but they add a layer of depth that sets the podcast apart from any other.

Before I started listening to Films To Be Buried With, I was worried about the Pandemic-related death anxiety. This isn't to say that the fear of dying has been completely eliminated, or that any of it is a substitute for care from a trained professional.

It has done a lot to help me process and unpack the dense, daunting subject of mortality during this epidemic while also making me laugh and provide a plethora of solid film recommendations.

"It did make me realize we only got this one life and I don't want to waste a second of it."

I was challenged to keep an open mind and remember that death is inevitable when I needed help making sense of the nonsensical. I will always be grateful for that.

We might not know what happens after we die, but instead of stressing over endless possibilities, I find some solace in the idea that when you go to the other side, it's movie night every night.

I don't know which movie I'm bringing, but I'm having fun and feeling less afraid while I figure it out.