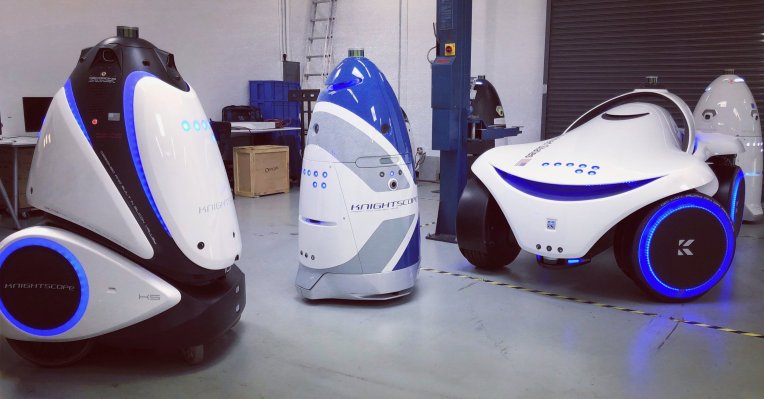 After months of waiting, Knightscope this week announced a January 27 date for its planned IPO. The Mountain View-based firm has risen to national prominence with its high-profile drones.

The company's sole market for the foreseeable future is the U.S., where some 80-90 Knightscoperobots are currently under contract. In our conversation, Li, a New York native, says that being pissed off by the 9/11 attacks was a key driver in the company's creation. The Sandy Hook shooting occurred a year prior to the firm's founding.

Knightscope's rise has been gradual. Many law enforcement agencies have been quick to embrace the technology to enhance their own presence, running 24/7. and cross-checking things like license plates and even your phone's address in a bid to detect and deter crime.

The company entry on the scene has caused controversy. Some high-profile incidents, including one robot driving into a wading pool and another colliding with a toddler, have made national headlines. Electronic rights firms like the EFF have called such technology a privacy disaster waiting to happen.

We talked to Li about the company's journey, future and controversy.

The interview was edited for clarity and length.

Can you tell me a bit about yourself and why you founded Knightscope?

I am a former car guy. Ford Motor Company is an awesome training ground and I spent a good amount of time there. I held 12 different positions over the course of a decade. I am so grateful. There is a personal and professional answer to why I started Knightscope. I believe that self-driving technology is going to change the industry. I don't necessarily agree on the path to commercialization of the technology. I hope that everyone gets to where they want to, but I don't want to stop at Mars, and I don't want to go to Pluto.

There is an expectation that accidents will happen when these things are used in the real world. The magnitude is different when we are talking about a multi-ton vehicle. There have been a few high-profile incidents.

It was like half a decade ago. 15,000 accidents happen every day for a 100 year old industry. There are a couple of minor incidents on a novel breakthrough technology.

Is there a certain level of expectation that these sorts of accidents will happen once these things are public?

Absolutely. More incidents will occur, I have said to the media, our lawyers, our teams, our clients, and our investors. Accidents happen. In a lot of cases, we have evidence to show that humans are not perfect. Accidents happen in many cases, it may not be the robot. Will there be more incidents in the future? Absolutely. Guarantee it. How do we handle it? How do we conduct ourselves? How do we take care of our clients? Do we make sure everyone is safe, or do we make any changes?

It makes an impact when many people are hearing about the robot for the first time.

They raised the company's profile and got more people on board.

I don't feel it. It was weird to have family members say "is everything okay?", but we did get a bit more exposure.

Is there a point in the future where the robot will be more involved in apprehension of suspects?

Absolutely not. Software +hardware +humans is the most powerful solution. You need the technology to do the heavy stuff and give the deterrents. The humans need to make decisions. No one in the history of mankind has ever done this at this scale. The last thing you need to be doing is something offensive.

What is the robot looking for?

They have a few key things. Some of them might not be that bad. If you are a commercial property owner, there should be no one around your property between 10 pm and 5 am. Send an alert if you see a person. It can be text, phone call or notification. We can read several hundred license plates per minute, so you can put a BOLO or blacklist a license plate of a person of interest on the system. You can run a thermal image of the environment. For stationary machines, we can run facial recognition, which can be useful for certain locations. We can detect any mobile device within a few hundred feet of the machine and treat it as a license plate.

Is there any suspicious activities that would set it off?

It would be suspicious if someone put out a BOLO for those things. I would most like to see us put a dog's nose on a chip. I'm very excited about the day I can put that on a machine. There is no technological hurdle because people want time and resources to get machines to learn. It would be suspicious if glass broke. A car starts, a door slams, a gunshot. Being able to translate sound is all those things.

I might get in trouble for saying this, but it's garbage in, garbage out. When a kid is growing up, you tell them that pistachio ice cream is really bad. An engineering bad input problem is when you feed an algorithm all the wrong data or incomplete data. That isn't that the technology is biased. I hope that over time, that gets corrected and that engineers always make things better and better.

I don't think that's true, I think that the artificial intelligence is going to cause more problems than people realize. A lot of people worry about the robot and the like. Follow the money if you want to figure out if something works or not.

There isn't enough capital and there isn't enough roboticists around the world to justify the concern of what is on the screen. I can see that happening from where I sit, but people don't want to hear that.

implicit biases and profiling are not unique to machines or robots, so I would caveat any discussion. It's up to the people who are imputing these things, but these have to be things a company like this has to really be aware of. Is that something that you can work on if you don't get it right, then at least improve over time?

There are two comments, the first serious and the second jest. People are concerned about robots. I worry about humans. The madness that happens in the country is insane. Simple manners are the second thing. If you don't properly introduce yourself when you show up at a new location, you're going to have a problem. Before the robots show up, we need to have an introduction, a robot lunch, and a robot naming contest.

Most humans are pretty rational if you do that. If the client won't allow you to properly introduce the robot, you're going to end up with a problem. Hollywood brainwashes everyone about what robots can and can't do over the last 40 years. Communication is part of this and includes time in the community, answering questions online, and doing interviews with people like yourself. The more people know, the more helpful this can be.

I think I said something. I don't know if I have more to say on that.

Why is IPO the right move?

There are pros and cons to doing a public listing. In the manner that we raised the capital in the last several years, we report to the Security and Exchange Commission every six months as if we are publicly traded, but the stock is not yet on a national exchange. We have all the negative consequences of being a publicly traded company, without any of the benefits. I bought a lot of companies in my previous life, so I needed to get the company out of purgatory. The public markets might allow us to be a bit acquisitive.

We're competing against a lot of big players, and having something that has an actual market value, as opposed to a phantom, so maybe one day it will happen. Larger clients don't like dealing with smaller, private companies. They need to deal with public companies that are audited. As the company continues to grow, it will need financing. If you look at it from the global capital markets perspective, it's a tiny bit of an opportunity, and I think it opens the chance for us to access wider capital markets.

The market is not in the best shape. Why is this the right time to do this?

These things don't happen overnight. It can take a long time to get everything in place. I'm going to get in trouble for saying this.

You say that a lot.

I get all kinds of love letters when I do an interview. I'm just going to be myself, but I'm going to get in trouble. I am not a quarter-by-quarter guy. I am not a time-the-market guy. This is going to take two or three decades to fix, and I worry about the market, can we please focus? We have proven works in the marketplace and have been proven to help society. Do I care if the market is up or down? We need to get going here.