These are 7 of the worst military defeats in modern history 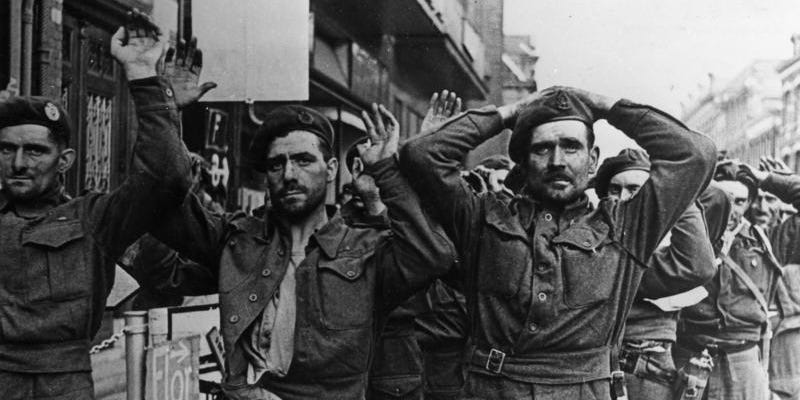 It's easy to think that most battles will go your way when you're one of the world's great powers. And the ones that will not? You can only lose so badly when you have better technology, larger formations, and/or God on your side.

Even great powers can get themselves curb-stomped in surprising ways, because that's not true.

There are seven military defeats where someone thought they could be the big dog in a fight only to find out they were facing a bear.

1. The battle of Tsushima was fought.

At the beginning of the Battle of Tsushima in 1905, Japanese Adm. Tg was on the bridge of Mikasa.

It's hard to remember that Russia once had a top-tier navy that made enemies around the world quiver in their boots.

During the Battle of Tsushima, Russia sent a huge fleet to defend their claims in and around Korea from a growing Japanese Navy. The Japanese Navy used their better ships, tactics, and telegraphy to destroy the Russians.

The Japanese ships were in better condition than the other fleets, which allowed them to sail faster. The Russians couldn't communicate with their lights and flags because of the heavy fog, but the Japanese could.

Russia's 38 ships were hit with broadsides by Japan's five battleships and 84 other ships and boats, but the Russians could only reply with forward guns. The Russians lost 28 ships and only sank three Japanese torpedo boats.

The soldiers behind the cuts to Kut.

The Turkish government is in theWikimedia Commons.

In 1915, the Siege of Kut took place. The British-Indian forces decided to stop at Kut, a position that was easy to defend but difficult to replenish. You can guess how that went since we're talking about a siege.

The British and Indian infantrymen arrived at the fortress on December 3, and the Ottomans arrived four days later with 11,000 troops of their own. The British sent away cavalry and other forces that could escape and settled in for the siege. The city was cut off from the river and land by the Ottoman forces.

British forces outside the city tried to relieve it three times. The British were forced to surrender after suffering 30,000 casualties and the capture of an additional 10,000 troops, including six generals.

3. The Italian Western Desert Campaign was during World War II.

The photo was taken.

The Italian invasion of Egypt in 1940 was a good victory for the fascists. In September 1940, they moved forward about 12 miles per day.

The British took advantage of the fact that the Italians failed to keep their troops close enough to support one another during the campaign, and they launched the operation in December.

The British were going to raid for five days. The goal was to push the Italians back a little, but the British made a note before the first attacks that they should be prepared to keep pushing. The British forces made a lot of progress.

The Italians were overrun by a force of 36,000 British soldiers. The British lost less than 600 troops in the attack, but they captured over 125,000 Italian soldiers and multiple cities, including the key port of Tobruk.

4. The Battle of France was fought in France.

The city of Paris was captured by the Nazis.

The Battle of France in World War II was not a war fought in France.

The French military knew that an invasion by Germany was likely in 1940, and they tried to prepare through modernization efforts and training.

They made two big assumptions, that the terrain of the Ardennes Forest would prevent an invasion by the Germans and that Belgium would last for weeks or months.

The Germans proved their tanks could make it through the forest, and Belgium fell within days. France, despite having more modern equipment and slightly more troops, fell to Germany in only 46 days with 1.9 million troops taken prisoner, thousands of tanks and aircraft destroyed or captured, and most of their country under German control.

5. The Battle of Midway took place.

Smoke and waterspouts from falling bombs obscure a US Navy ship, right, during a Japanese aerial attack at the Battle of Midway, June 1942.

The images are from the archives.

Pear Harbor: The Sequel was supposed to be the Battle of Midway. Six months after the attacks at Pearl, it was an ambush.

The Japanese wanted to draw the American fleet into a battle that the Americans would think they could win, then slam them with additional forces and wipe out America's remaining carrier and capital ship strength.

The Americans captured Japanese communications traffic and then launched an ambush of their own. Japan assumed that America would only have two carriers and a fleet full of sailors.

Instead, America showed up with an extra carrier and prepared over 120 aircraft to join the battle.

On June 4, 1942, the fleets clashed, and Japanese aircraft were outnumbered by a US presence in the air. Japan would lose three carriers and almost 250 aircraft in the fight, while sinking one US carrier and downing 150 US aircraft. The battle changed the balance of power in the Pacific.

6. The Battle of Stalingrad took place.

A soldier is at the Battle of Stalingrad.

Wikimedia Commons has a picture of Bundesarchiv.

The German invasion of the Soviet Union relied on a number of horrible assumptions, including the idea that the Soviets were inferior and part of an uncoordinated system. Racist and hope are not viable strategies for them.

Stalingrad was the worst of all the places the Soviets forced Germany to fight for.

German forces slogged their way through the city for nearly six months, and some of the streets were impossible to navigate. An infantry platoon turned an apartment building into a fortress and wiped out German armored formations for weeks.

Over one million men were thrown against the city by the Germans and they lost over one million of them. The Soviets lost more than one million people, but they bled the German formations dry of food, water, and men, allowing the Soviet Union to take the offensive and push the enemy back toward Berlin.

7. The market garden is being operated.

The British troops were captured in September 1944.

The Wikimedia Commons has the Bundesarchiv.

In 1944, the allies wanted to end the war in Europe before Christmas and give all the Allied citizens the best Christmas present in the world.

The plan called for a two-force approach, airborne assaults to take key bridges and a ground campaign to envelope portions of the Ruhr River.

The assault on September 17, 1944 didn't go as planned. German forces made sure to blow up bridges when they couldn't hold them, like in D-Day, because they learned from previous Allied offensives.

The capture of most of the key bridges was either delayed or prevented. The armored forces couldn't punch through the German defenders without bridges, so the airborne forces remained isolated.

Over 15,000 troops were killed, captured, or wounded, and around 10,000 casualties were inflicted, guaranteeing that the war would continue into 1945.