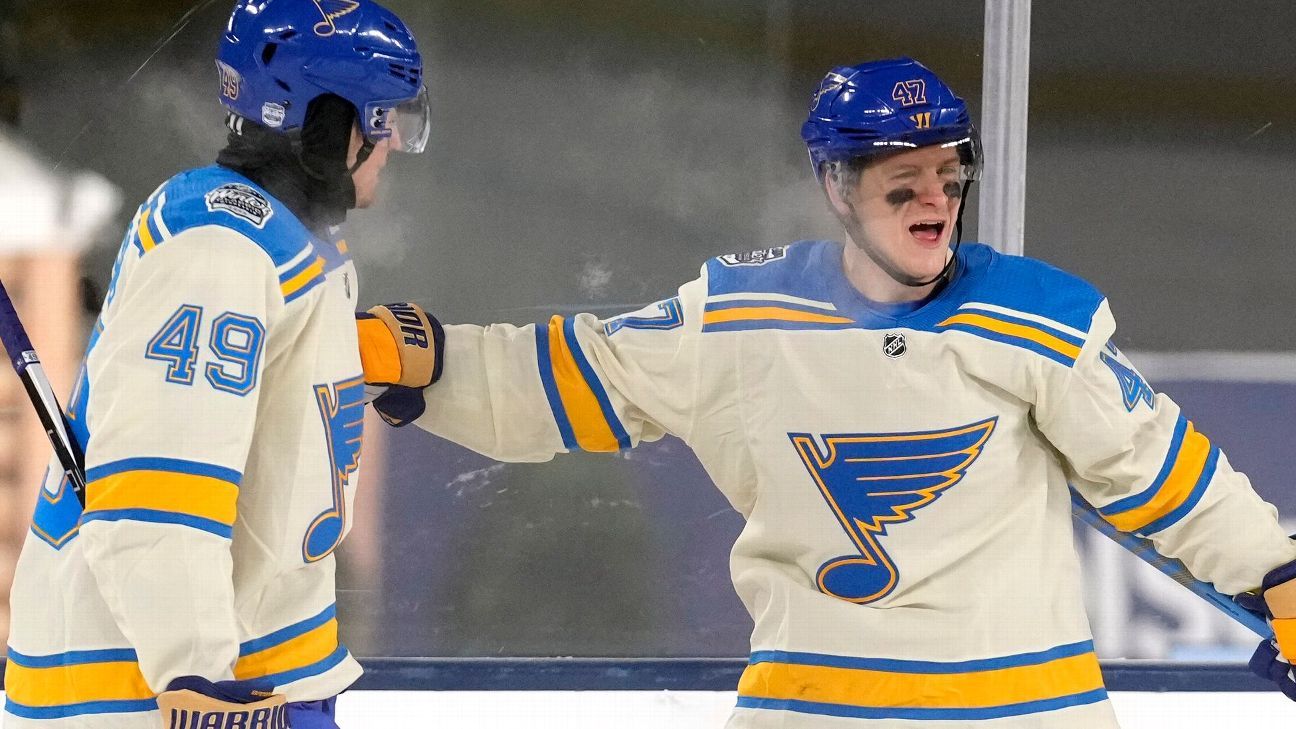 The Blues beat the Wild in the Winter Classic.

The Blues jumped out to a big lead and never looked back as they beat the Wild. The song is called "2.

Jordan Kyrou had two goals and two assists in a five-goal second period for St. Louis, and the Blues romped through the Winter Classic with a victory.

The league's first outdoor game was played at Target Field, the home of the Minnesota Twins, and the official faceoff temperature was minus- 5.7 degrees.

The home team's play for a good portion of the game was described as cold, as Minnesota was returning from a long layoff due to the league's COVID-19 pause and other game postponements.

David Perron got the Blues on the board. Kyrou scored in the second along with Vladimir Tarasenko, Ivan Barbashev, Torey Krug and Robert Thomas. The Blues are 11-1 in their last 14 games against the rival Wild and Jordan Binnington made 29 saves.

Kirill Kaprizov had a goal and two assists, and Ryan Hartman had a goal and an assist for the Wild, who trailed 6-2 at the second half and benched goalie Cam Talbot.

The Wild scored two goals in the last 5 minutes of the game, including Kevin Fiala's 6-on-5 goal, which brought them to within a goal.

The game puck was given to Kyrou by St. Louis coach Craig Berube in his postgame speech, but he really wanted to give it to everyone because it was a team effort.

Talbot wore a green stocking cap on top of his mask to match Minnesota's jerseys, just like he did in the Heritage Classic. He didn't get much help. In the first two periods, the Wild allowed 14 shots on goal while missing their two best defenders, captain Jared Spurgeon and Jonas Brodin.

The Wild had four games postponed over the last three weeks and had not played in over a week. They have given up 22 goals in their last four games.

The Blues were the sharper team, having beaten the Eskimos 4-2 on Wednesday behind a goal and two assists from Kyrou, who was back from a four-game absence due to an upper-body injury.

Ryan O'Reilly's shot went off Jon Merrill's skate and into the net for Perron to score.

Kyrou put the Blues in front for good 27 seconds into the second period on a bad-bounce goal that glanced off Hartman. The Winter Classic is the main outdoor event of the NHL and Kyrou's four points are the most in 13 editions.

Pitlick's behind-the-net shot that clanged off the side of Binnington's mask was the highlight of the game.

Despite the temperatures, a lively crowd danced and sang through the aisles all game long. Even though the score was in favor of the road team, very few sections of Target Field emptied as the game went on.

Several fans from St. Louis made the trip to watch the Blues win the Stanley Cup, and they were in the stands.