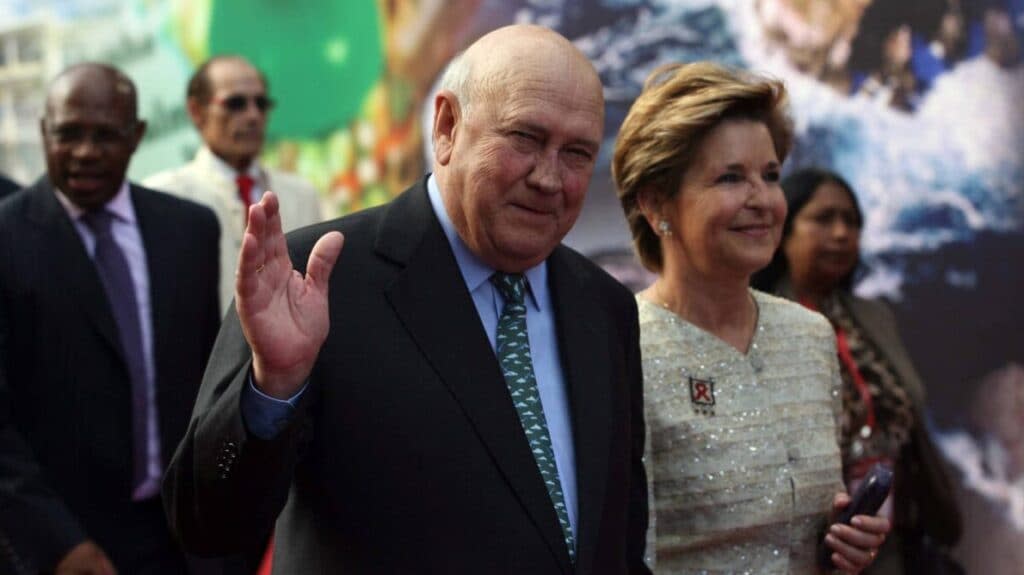 The Black people of Azania, the ancestral name of South Africa, were insulted when De Klerk was referred to as the country's president.

F.W. de Klerk was the last overseer of South Africanapartheid.

He was surrounded by his loved ones and top-of-the-line medical staff when he died. The nation is still reeling from the effects of a grotesque regime that still grips the nation 27 years after so-called freedom.

My 3-year-old self was held captive by the de Klerk regime. The Black people of Azania, the ancestral name of South Africa, were insulted when De Klerk was referred to as the country's president.

FW de Klerk and his wife attend the Red Carpet event prior to the 2010 Soccer World Cup Final Draw at theCTICC on December 4, 2009 in Cape Town, South Africa. The Organising Committee of the 2010 World Cup in South Africa.

I was born in a place called iNanda in the province of Kwa-Zulu-Natal, which is now called South Africa. I was born on the land of my ancestors, which was fought for and kept by my great great-grandfather.

In this land of my ancestors, I was taught to firmly plant my feet and walk back straight, shoulders back and head high, where my umbilical cord was ceremonially planted in one of the few sacred rituals that my family and others like us were able to still preserve in resistance to de Kle

The planting of the umbilical cord is meant to serve as the cord that will always connect one to home, no matter how far away they are.

I faced the police for the first time when I was two years old. They were looking for teenage anti-apartheid freedom fighters. The teenage freedom fighters were tortured, killed, and thrown in mass graves, which we later learned was the reason they disappeared. Without the death rituals that unite them in peace with their ancestors and God, they were lost.

As the military tanks roared toward us, we ran for the nearest shelter. When I close my eyes, I can still hear the heavy breathing and whispers of my neighbors, and I feel the heat from the sweat and tears of my neighbors as we all instinctively held tight to one another. For a long time, my memory was scattered, with my mother yelling my name out of the shed, people crying, the shed door being cracked, and me being pushed out.

My grandmother who had already escaped to the United States would tell us about how people were protesting. We were forgotten in daily life. As civil conflicts increased, my grandmother began to arrange for us to escape to the United States, but we could only do it as visitor visa holders because no refugee status was issued for black South Africans.

Dan Kitwood is the photographer.

During the height of the crack epidemic, my mother was exiled from all she had known and began her life in Harlem, New York. She was alone in a one-bedroom apartment with four children. I struggled being a Black immigrant girl with a name that requires you to take your time in my new life. I was surrounded by people who looked like me, but they didn't greet me with smiles.

I fight for documentation for millions of immigrants who have stories like mine, who have been disconnected from home, family and culture. If the Build Back Better Act does not include a pathway to citizenship in the form of green cards, American leadership will fail me again.

31 years ago, I dedicated myself to human rights and social justice. I have hosted an elected South African president, organized an international conference, and advocated for the creation of the temporary status I now have, Deferred Action for Child Arrivals.

I have lived a limited life professionally and personally, even with all the years of achievements, including having my first son without citizenship. I will bury my hands under his great-great grandfather's soil in South Africa next year and plant a piece of Nkanyezi's umbilical cord there, even if it means starting life over again.

I will keep my son's connection, his cord to home, despite F.W. de Klerk and the U.S. government.

The director of narrative and media at the UnodcuBlack Network is Yoliswa Cele.

Have you subscribed to the Grio? Do you want to subscribe to the newest episodes?

TheGrio is available on Apple TV, Amazon Fire, and Roku.

The 3-year-old girl was held captive. 34 years of justice was deferred.

The African Development Bank backed the concession agreement for Skytrain.

A judicial inquiry has been launched after a media probe accused the ex-president of the Democratic Republic of the Congo and his family of swindling off $138 million in state funds.

We have been doing things that haven't worked well enough. Let's try something different.

Plug Power's shares rose 1.8% on Wednesday. On Nov. 24. Plug Power is on a roll as far as investments into growth are concerned, and that has investors excited. Plug Power announced an order for a 100 megawatt (MW) electriclyzer from Fertiglobe to produce green hydrogen as a feedstock for an ammonia production plant in Egypt.

The partner of murdered Gabby Petito was found dead a month after going missing.

The Advertiser of Montgomery.

Is he richer than Gucci?

Libya's top electoral body disqualified the son and onetime heir apparent of the late dictator Moammar Gadhafi from running for president due to his previous convictions. Seif al-Islam Gadhafi was on a list of ineligible candidates. Libya's rival authorities called into question the death sentence against Seif al-Islam, who was sentenced to death for using violence against protesters.

Food security advocates breathed a sigh of relief when the USDA boosted the payments to low-income Americans.

People want to use his name so they can get some publicity. "I think it's cheap," said Mark Richards.

China's vice commerce minister Ren Hongbin said on Wednesday that there are still many concerns for foreign trade, especially for struggling smaller exporters, and that China will introduce a new round of measures to fix it. Ren told a news briefing in Beijing that there is still a lot of pressure on small and medium-sized enterprises. Strong overseas demand has helped drive economic growth in China this year.

Indianapolis is consumed by violence for another year. After 2020 was the most violent in the city's history, more people died in 2021.

His recent argument that the unvaccinated are the biggest American pariahs since slavery puts him in the running.

There is a new variant of COVID-19 that could potentially drive another wave of cases, officials warned on Thursday. You can subscribe.

A brother-sister duo share love and light with most deserving humans at the hospital.

The documents show how the disgraced financier convinced doctors he wasn't a suicide risk after 36 days in prison.

For 50 years, the Beatles' recording session was portrayed as a miserable experience with a band where members were sick of each other, sick of their work and in the process of breaking up.

Quinton de Kock: South Africa keeper sorry over refusal to take a knee and says he is not racist