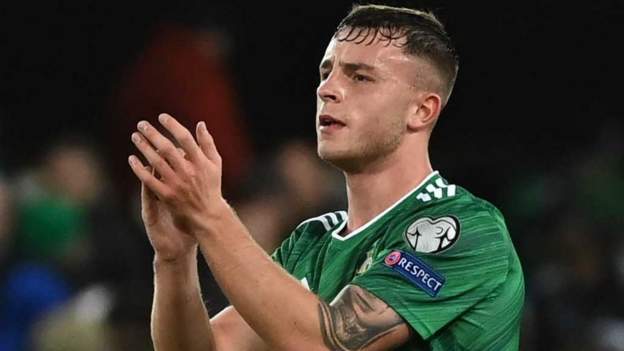 "Hopefully there are more to come" - Northern Ireland's Dale Taylor after winning his first NI cap
His smile was radiant. His joy was infectious. Yet, his calmness was evident.

Dale Taylor, now 17, had just made his debut in the 1-0 World Cup qualifier victory over Lithuania at Windsor Park.

The Nottingham Forest striker, who has yet to play for Championship club's first side, was substituted for Josh Magennis at the 78th minute. This victory saw Northern Ireland move up to third in their qualifying group.

The teenager from north Belfast said, "I've never had a better feeling than this - it was a dream come to life."

Although the emotions were raw and honest, the mannerisms were controlled and mature.

When asked how it felt to make those first steps onto the Windsor Park pitch, and hear the roar of the crowd welcoming him, he replied "To be truthful, I don’t even know."

It was amazing. It was beyond words. It was the first time I have ever played in front this many people.

"The manager told me to go out and play my game, to work hard for the team, and not to be afraid to make mistakes."

Taylor has yet to represent Nottingham Forest's first football team.

He was quick to get into the match and found space in the box. After deciding not to shoot, he went on a driving run, before finally forcing a corner with his cross.

"I thought about shooting, and I don’t know why I didn’t. I should have shot it!"

Taylor has had some experience with senior international football and now he wants more. Italy is coming to town!

Roberto Mancini's European champions will travel to Belfast on Monday night as the Group C leaders. However, they need to win to secure their place in the final qualifier.

Taylor laughed at the idea of Taylor watching Italy win the Euros in TV and then thinking that he would be playing against them later on.

"No, that was not what I thought. He said that he didn't know if he would be called up to the senior team so soon.

"Obviously, Italy are an incredible side, winning the Euros. It would be impossible to go up against them."

He'll feel a 'tingle in his spine'. - Baraclough

Just before his striker spoke, Ian Baraclough, Northern Ireland manager, gave insight into his thinking and sent the youngster on his way.

"The way he has been the past three to four days has shown me that he can handle it. How are you going to find out if he is okay without putting him in?

What about those chances of a second cap for the Italians?

"He has passed the first hurdle to make his debut. He would have felt tingling from the crowd's roar.

"Now, he has to keep going and win the next game. He will know what it's like under the lights if he has a chance to play against Italy.
feelingtayloriveteamitalywindidntnortherngoingunbelievablemanagerplaybetterireland
2.2k Like