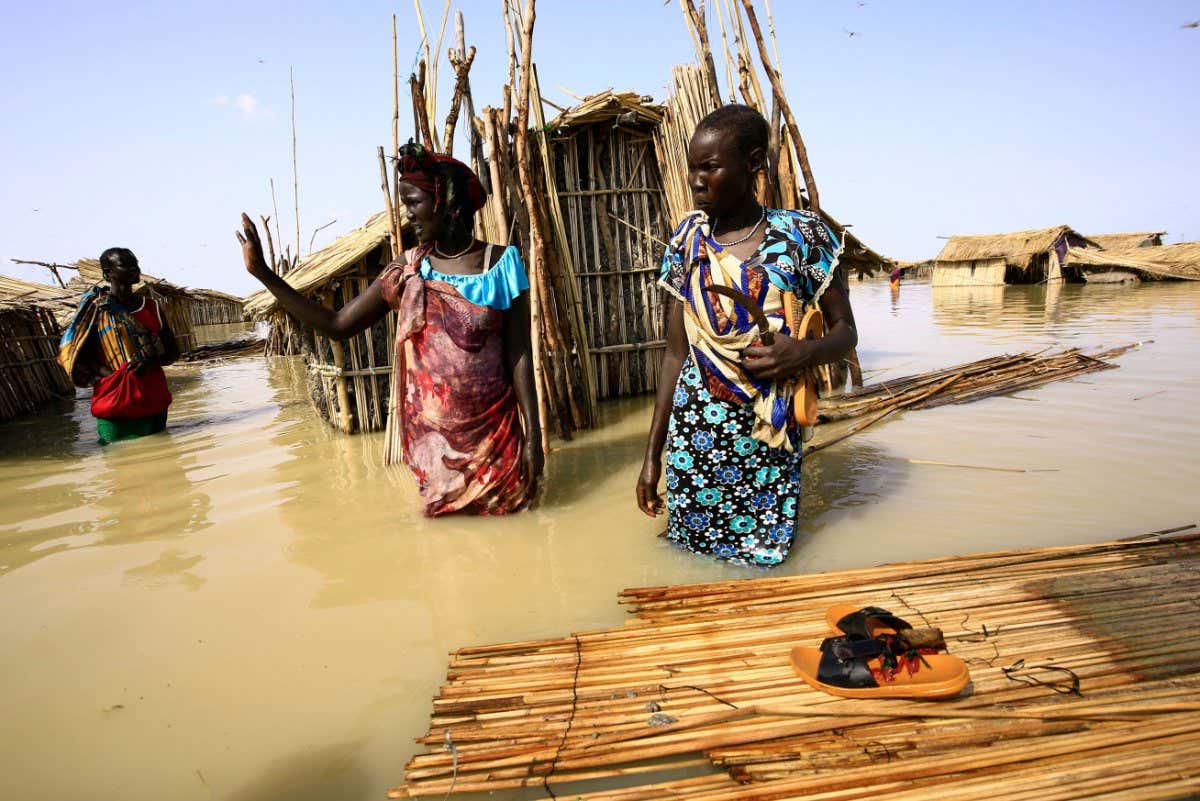 People are being forced from their homes by severe flooding and droughts. Attendees at the COP26 climate summit urged for climate change adaptation.
People in South Sudan attempt to rebuild their huts in flood waters. Refugee camp Ashraf Shazly/AFP via Getty Images

The COP26 climate summit was focused on the question of whether countries will work together to tackle climate change and adaption. Extreme weather caused displacement of 30 million people worldwide last year. The problem is only going to get worse. How serious was Glasgow taken to this issue?

Emi Mahmoud, an activist from Sudan, said that her father grew up in a rural village that no longer exists.

Higher temperatures can mean higher sea levels, shrinking coastlines, and more flooding. Mahmoud stated that this is what's happening right now. She said that the failure of crops in her country is making people hungry and struggling to make ends meet. All over the globe, homes are being destroyed by extreme weather events such as wildfires and hurricanes.

To help poorer countries adapt to climate change, higher-income countries donated $20 billion last year. They promised to double that figure by 2025, but many countries of lower income at COP26 said it was not enough.

For the worst effects of climate change, low-income countries like Bangladesh and Fiji need more money. People may need to flee their homes if it is not forthcoming.

Arafat Jamal, United Nations High Commissioner For Refugees, says that flooding has affected 780,000 Sudanese this year. This could result in violence.

"People aren't yet crossing borders." He says that in a country with 64 different ethnicities and a history full of conflict, it's like playing with fire while so many people move."

Jamal claims that there were moments of violence in Mongalla, South Sudan last year after people from the nearby Jongeli state moved in following extreme floods. However, he said no such violence was seen this year. He says that people are simply trying to survive.

Although floods are not new in Sudan, they are getting more severe and frequent. It isn't just that people are losing homes; they are also losing their livelihoods, food, and income. Jamal claims that there are 16 million cows within the country. They are not equipped for dealing with mud. They simply stand there and remain stuck."

Jamal claims that some people sell their cows at a tenth the cost of what they paid because they know their cows are going to starve.

Sorghum crops have been decimated by waterlogging, which has also caused the destruction of staples used in making bread. Jamal states that if this situation becomes permanent, millions will need to relocate to other parts.

Aiyaz Sayed-Khaiyum (Fiji's attorney-general) stated that although more money is being plowed to reduce emissions, not enough money has been allocated for adaptation. Mitigation [cutting emission] is very glamorous. It is a popular area for private equity funding. Adaptation doesn't."

Andrew Harper, UNHCR's special adviser on climate action, said that it is important to remember that most people who have been displaced by extreme weather don't move across international borders. He says that almost everyone wants to remain close to their community.

He says that the lack of funds for adaptation will lead to more people having to move.

He says that more money should be spent on flood mitigation and the development of crops that are resistant to extreme weather.

Harper claims he was invited on panels to discuss this issue in depth during COP26. He says, "There was a lot talking." "But I don't know how many people were listening."
weatherclimatecountriessaycop26climateravagedadaptationmoneyissuehomesneedregionsextremesummitaction
2.2k Like