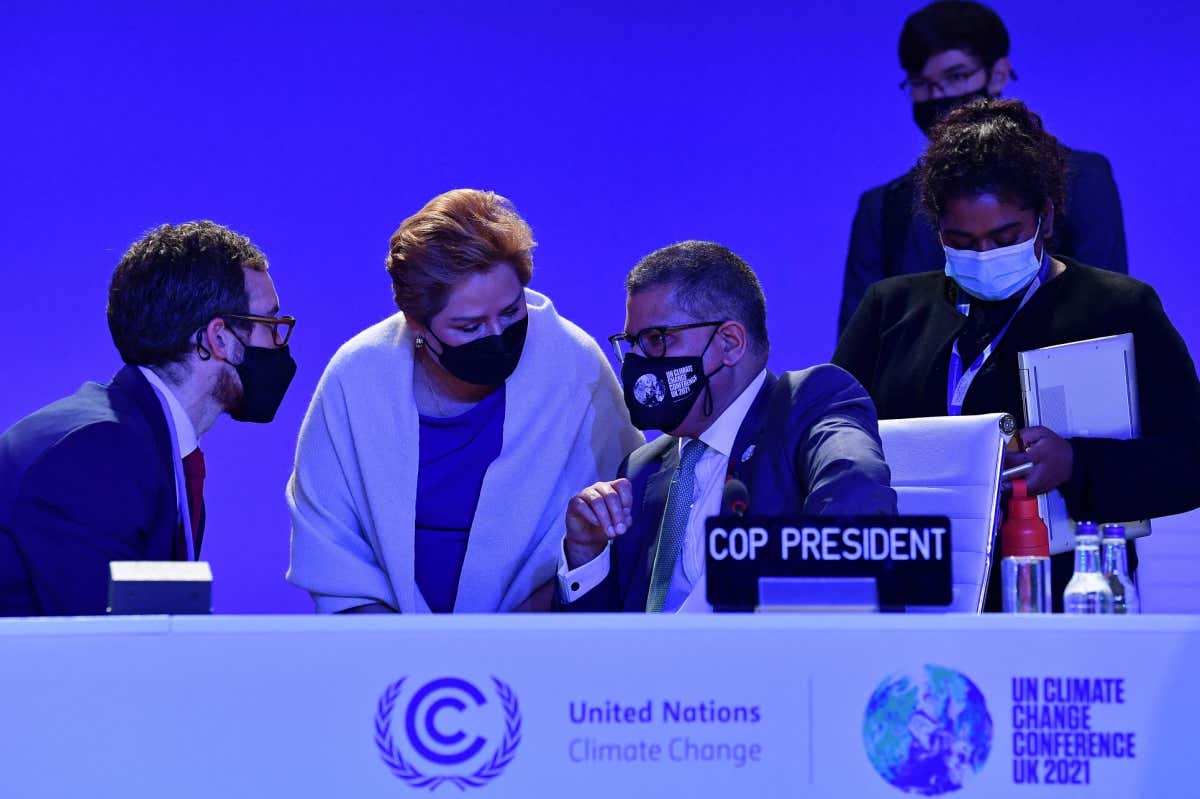 The world was on track for 2.7degC warming before COP26. Now it is at 2.4degC which is a substantial improvement. Future summits will have to push for more emissions reduction and climate adaptation funding.
Alok Sharma, the president of COP26 in Britain, speaks to Patricia Espinosa, UNFCCC executive secretary after an informal stocktaking session COP26 Ben Stansall/AFP via Getty Images

We are now at the end of this line, sort of. Although today is the final day of the COP26 climate summit it seems almost certain that talks will continue into the evening. This is the last daily update. However, these conclusions are only provisional. Next week, when the summit is truly, truly over, we'll be able to provide more conclusive analysis.

It's the last countdown - blahblahblah blah!

Although we don't know the final text of COP26's decision texts, we do have the most recent drafts. They were released last night just after 7 AM GMT, following another overnight session. I hope the negotiators were well-rested with caffeine. It reminds me of Jim Hacker's BBC programme Yes Prime Minister, where he mentioned that "statesmen like myself jet all over the globe, attending major conferences about the future of humanity and we're zonked".

The new drafts have caused a lot discussion. Much of it was focused on whether or not they are better than the originals. There are some key changes.

In the original draft, it was stated that coal should be phased out. This has been changed to "unabated" coal. It refers to coal-fired power stations that do not have a carbon capture or storage (CCS), system to trap greenhouse gases and bury them underground. Depending on how confident you are in CCS's utility, your mileage might vary. This technology would allow certain fossil fuels to burn without affecting the climate. Although it seems to work, it requires a lot infrastructure and is therefore expensive. While most scenarios that limit warming to 1.5 degrees Celsius do not use CCS, there are strong arguments that it should be used for processes such as steel manufacturing, which are difficult to decarbonize, and not to maintain dirty coal-fired power plants. It seems that unabated coal is better than unabated, so this part of the text represents progress.

More importantly, the push to eliminate subsidies for fossil fuels was watered down. It now refers to only "inefficient" subsidies. I don't know what this means. Governments should not subsidise the use of fossil fuels if we want to reduce their consumption and stop them altogether. A subsidy for efficient fossil fuels is not possible. This change appears to be an unambiguous weakening in the text.

The summit and its aftermath have only confirmed the perception that governments are still too influenced by the fossil fuel industry. Friends of the Earth, a campaign group, criticized the European Commission for backing 30 major gas projects worth EUR13 billion. The Mirror newspaper in the UK revealed that PS1.5 million has been taken from oil and gas donors by the ruling Conservative party since 2019.

Positively, one of the most important parts of the COP26 text appears to have survived. This is the call for countries to set new 2030 emission targets by next year. The language has been changed. It now says "requests" that countries do this. Previously, it was "urges". This morning, a lot of Twitter ink was poured on the question of which verb is stronger. This kind of linguistic tomfoolery can make your head hurt. Adam Vaughan, New Scientist, says that the directive to create new plans by 2022 has been through the most recent round edits and could make it into the final text.

Finance is another area in which the text has been improved. By 2025, countries with higher incomes have committed to double the amount they spend to aid lower-income countries in adapting to climate change. They give around $20 billion annually. The related issue of the promise of higher-income countries to provide $100 billion per year in climate finance to low-income countries by 2020 is also relevant. The promise was not kept and the higher-income nations have now expressed their regret for it in the latest draft. They are now "exhorted" to achieve the annual target by 2025, according to the text.

There is also loss and damage. The idea that those who have been affected by climate change and cannot adapt to it should be compensated for their losses ought to be the last thing on the minds of anyone. Although we are still far from seeing any money change hands, COP26 did see some progress. Draft text also includes a decision for a "technical assistance center", and Nicola Sturgeon, Scotland's First Minister, has pledged PS2 million to help with loss and damage. These are small steps.

Keeping in mind that all of this is still provisional, let's sum it all. First, let's say that many of the larger statements survived, and there are new ones. This is not a one-size fits all situation. Although there are many loopholes that remain for fossil fuel emitters and are being closed, others are closing. Richard Webb, a New Scientist, says that while mitigation is less effective than what we wanted, adaptation is more successful than we thought.

This is my last day of writing these newsletters. I will offer my opinion, based on the fact that the final text will be largely the same as what was in the drafts. My opinion is that COP26 would be viewed universally as a successful climate summit if it was held in 2001 or 2011. It did not take place in 2021. Why would I say this? The international plan is clearly inadequate for the current situation, and puts us on track for 1.5degC warming rather than 2.4degC. The fact that 1.5degC is not on our radar is more due to the failures of many of the 25 previous COPs. We were on track for 2.7degC warming before COP26. Now we are looking at 2.5degC. This is a significant and real improvement. The problem is that many summits did not achieve as much.

If you don't believe that one summit is enough to bring all countries together to commit to major infrastructure and economic reforms, then there is no way the problem can be solved by COP26, COP25, or COP24. This has actually been a solid step forward, reducing the expected warming by 0.3degC. There are also symbolic shifts that cannot be quantified, such as the text calling out fossil fuels directly. These are not directly related to emission cuts, but they can give political leaders some encouragement. We would be able to solve the climate change problem by now if all previous COPs had made as many progresses as COP26.

However, some of you may still be upset by the outcome. Some people may feel angry, sad or frustrated. All of these emotions are common in me. You can get angry. Global protests have taken place over climate change in recent years. It seems probable that these protests provided some fuel to the progress made. Tell your representative if COP26 is causing you pain. Go join a protest. Our leaders will take more action if we continue to demand more action. The next year's COP is in Egypt, and the one following will be held in the United Arab Emirates. Book your train tickets today and get in on the action.

What to look out for

This is the final New Scientist daily update from COP26. But it's not the end of our coverage. Keep an eye out for additional stories and analysis by chief reporter Adam Vaughan as the summit draws to a close.

Quote of the Day

"I'm here to beg for you to prove me wrong." Climate activist Vanessa Nakate told COP26 delegates that she didn't believe what they were promising and that they weren't sincere in wanting to help.
summitclimatetextwarminglotprogressemissionsfinalrealneededcop26countriescutsfossil
2.2k Like