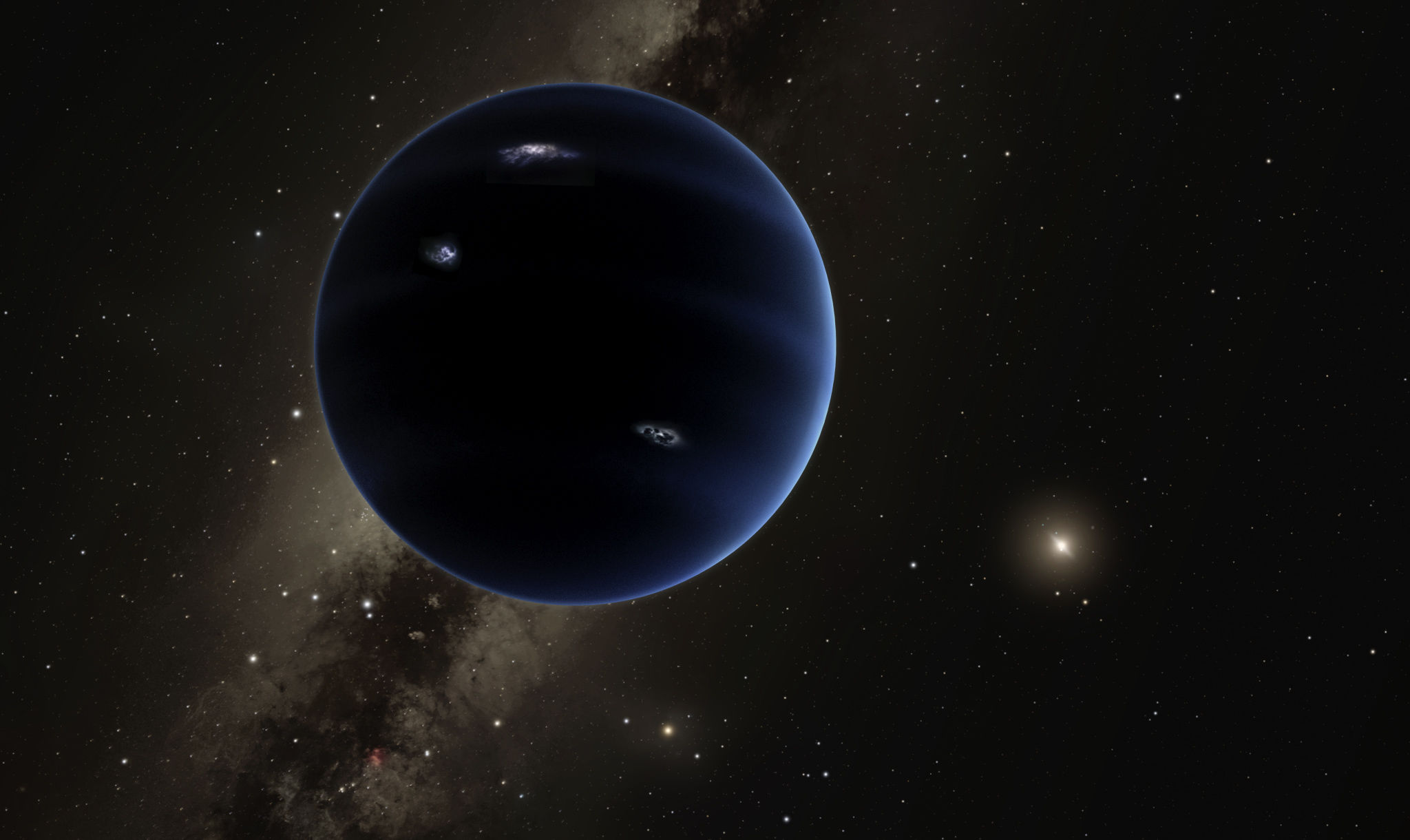 Astronomers have been searching for another planet in our solar system for a while now. One that is larger than Earth and orbits the Sun much beyond Neptune. Not-so-tongue-in-cheekily, they've been calling it Planet 9.
The space beyond Neptune is not empty. There are many small objects made of ice or rock that can be found out there. These objects are collectively known as Trans-Neptunian Objects, or TNOs. This includes Pluto, technically the largest TNO (it is the largest we have seen so far), however, there are many other TNOs. They are so far away from Earth (at least 4.5 billion km), that even large telescopes can't detect them. The first was discovered in 1992, along with Pluto and its moon Charon.

There are thousands of them, some very far from the Sun. Although not many of these distant ones are currently known, it was discovered that their orbits were almost perfectly aligned. Their orbits would be expected to be somewhat random, with ellipses tilted or rotated in every direction. They all seem to be pointing in the same direction, despite having long axes.

This is unlikely by chance. That's why Planet 9 was created. The gravitational effects of a massive planet orbiting so far out could over time affect the TNOs and align their orbits.

Mike Brown and Konstantin Batygin, the two original people who proposed the existence of the planet, used the TNO orbits alignments to calculate the possible location of the unknown planet in space. It is a treasure map that helps you find the planet.

They've used that map in a paper to look through survey data in an attempt to find Planet 9.

Zwicky Transient Facility (ZTF), a 1.2-meter telescope located in California, has a huge camera that covers 47 square degrees of sky in one shot. The full Moon's area is approximately a quarter of an inch. It can also cover the entire northern and southern skies every three nights. It is looking for objects that move or change their brightness. This includes comets and asteroids, TNOs, supernovae and gamma-ray blasts... even Planet 9.

Brown and Batygin created software that simulates the location of Planet 9 and how bright it would appear for different values of its size and reflectivity. They built a database with positions and brightnesses, then searched the ZTF database looking for it. This was based on the three years of data collected since the facility began its survey campaign.

They were able, however, to place some interesting limits on Planet 9 given that they didn't detect it. Some of their models suggest that Planet 9 may be smaller and closer to the Sun than they originally thought. This makes it easier to spot and brighter, which is why they started looking at ZTF.

Although they cannot rule it out, they believe it less likely now that they didn't observe it in the survey. They ran 100,000 simulations for various parameters of the planet to determine if the ZTF would have seen it if it was smaller or closer to them. It would have been seen in the survey approximately 56,000 times out 100,000. Just looking at the non-detection, it indicates that the probability it is smaller and closer to us is now less that 50%. This makes it more likely that it's further out, larger, and fainter.

It's disappointing but not conclusive. ZTF still has a chance to find it, provided that the planet isn’t in the southmost part of its orbit. ZTF cannot see the planet due to Earth’s latitude. It may also be too faint to see with ZTF. We'll need to wait until bigger telescopes like the Vera Rubin Observatory are available.

It will be noted that the astronomical community still isn't convinced that Planet 9 exists. Every now and then, papers are published trying to explain TNO's orbital alignment. This is called a selection bias. It's not true, but it's due to how we find these objects: Where we look in the sky, when we look, etc. Brown and Batygin also published rebuttals, stating that orbits remain non-randomly aligned even after accounting for biases.

All of this is actually very enjoyable to me. It would be great if there was another major planet in our solar system. It would be romantic, and it would also bring out the best in me -- another planet! It would provide us with incredible insight into the formation and evolution of planetary planets. It would provide amazing science.

But, I also enjoy the back and forth with astronomers. This is science, and it works well. Brown and Batygin made an incredible claim. Now it's up for them and other astronomers, to find out how they could be wrong.

This case will prove it in the planeting. Hurray! If surveys are completed over the entire sky, to a reasonably small limit, and still no sign of it, we will have learned something. Although it isn't as fun, it is still an important result.

It's possible that we won't have to wait too long to find out.

P.S. P.S. Since I was a child, I have been fascinated by the idea of another planet in the solar system. I would write on the topic regardless and I will try to be fair in my analysis.
orbitsskyfarsystemisntsurveyztfsolarplanetneptuneobjects
2.2k Like

The case of the Centaurs that didn't bark in the night