Marcus Smith: Smith starts at 10 for England against Australia 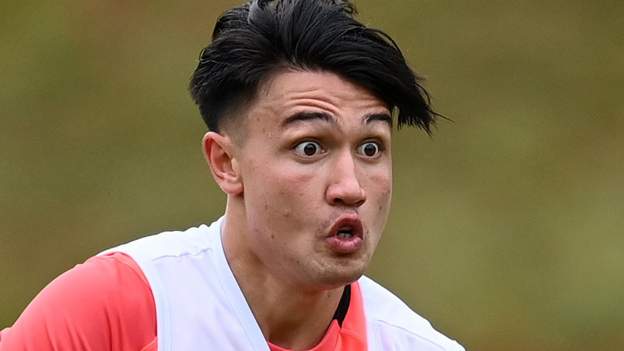 Last update on. From the section Rugby Union
Farrell (left), and Smith will form England's 10-12 partnership against Australia

Marcus Smith will be the fly-half for England in their match against Australia on Saturday. Captain Owen Farrell will shift to the inside centre.

Smith, 22 years old, is making his third Test debut after leading under-strength England team to victory over Canada and the United States in July.

Centre Manu Tuilagi, despite having only one appearance in this position in his 44 England caps, is now on the wing.

To make way, Adam Radwan from Newcastle has been removed from the matchday squad.

Raffi Quirke, an uncapped Sale duo, and Bevan Rodd, are among six forwards on a bench that also includes Harlequins Alex Dombrandt and Exeter’s Sam Simmonds.

Eddie Jones, head coach of the team that opened their autumn campaign last weekend with a 69-3 win over Tonga, said "We know this is going to be a difficult test for us."

"It's probably difficult for the English to grasp how important this is in Australia. It doesn’t matter if it is Olympics, Test cricket or rugby league. This is the game that defines a season."

"We Australians have an inferiority complex to the English, and they will want us to come with them."

During Jones' tenure, England won seven matches against Australia. Most recently, they beat the Wallabies by 40-16 in quarter-finals at the 2019 Rugby World Cup.

Australia's last win was at Twickenham on the pool stage. This victory brought an end to England's 2015 Rugby World Cup campaign.

Smith was a crucial part of Harlequins' surge to the Premiership title, last summer. He has been given the task of sharpening England’s attacking edge.

After being chosen over Leicester's George Ford, who is in-form and has been a partner with Farrell since their teenage years, the stakes are high.

Smith was injured in his leg during preparations for Tonga's game. However, he scored a try to cap an impressive second half.

Jones warned Smith earlier this week about off-pitch distractions. Jones says he is impressed by Smith's calm temperament and control.

Jones said, "Marcus is aware of the work he must do to build his game. But I have been really impressed since I began working with him daily since the summer."

He is making progress in a positive way but this is his greatest test. He hasn't yet played a Tier 1 country.

Slimline Tuilagi is on the wing

Last weekend, Tuilagi made some eye-catching line breaks in the face of Tonga

England's strength-and conditioning coach Tom Tombleson said earlier this week that Tuilagi's external-link body fat was lower and that he was running faster now than ever since 2011.

He credits his wife for helping him lose weight, which has made him feel more energetic in the last quarter of games.

Jones said Jones was pleased with the unusual selection.

"We may not have to worry about Australia's high ball." We have other blokes who can kick under the high ball if they do kick."

Tuilagi's other Test start was in Dunedin, New Zealand in June 2014.

Blamire and Rodd are available as replacements for Simmonds, Simmonds or Quirke.
startstestjonestuilagienglandrugbytongamarcussmithenglandsaustraliastart
2.2k Like