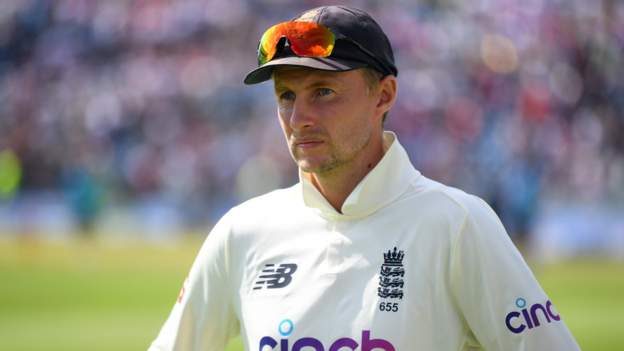 Last update on. From the section Cricket
Joe Root is a member of the Yorkshire first-team team since 2009.

A report revealed that Azeem Rafiq, a former Yorkshire player, was the victim of racism harassment and bullying. However, the club denied any such allegations.

Root stated, "I want the sport to be a safe place where everyone can enjoy it for what it is,"

"We must educate, unify, and reset."

Root made his Yorkshire second team debut in 2007, before playing for the first club in 2009. Root added that he wanted to see "change and actions that will see Yorkshire County Cricket Club emerge from this with a culture which harnesses a diverse ecosystem with trust across all the communities that support cricket in Yorkshire."

"I will reach out YCCC's new chair Lord Patel for support whenever I am able."

Root was asked if he has witnessed any racism at Yorkshire. Root replied: "Not that i can recall... but it is clear things have occurred at the club."

Rafiq was born in Pakistan, and moved to England at the age of 10. He spent most of his career in Yorkshire between 2008-2018.

He was a youth captain for England and Yorkshire.

Rafiq said that he was close to suicide after a September 2020 interview with Wisden.

BBC Sport told him that he was afraid of "every second" in his career, and that a teammate used a racially offensive term related to his Pakistani heritage.

In September 2020, Yorkshire opened a formal investigation into Rafiq’s allegations. The then chairman Roger Hutton stated that the club would be conducting a "wider assessment" of its "policies & culture."

Three days after Yorkshire had received the report from law firm Squire Patton Boggs in August 2021 they acknowledged Rafiq as "the victim of improper behaviour" and offered their "profound apologies".

Rafiq was deemed the victim of racial harassment, bullying and seven of 43 allegations were upheld in the report summary. However, the club stated that they couldn't release the complete report due to legal reasons. They claimed there was not enough evidence to conclude that the club was institutionally racist.

Rafiq asked Rafiq about the punishments that were handed out to ex-players and coaches who were found guilty of racist language. Rafiq also questioned whether the investigation was valid.

Root was speaking at the Ashes preparation camp for England in Queensland, Australia. He added that it hurt knowing this had happened at YCCC so near to home.

"It's my club, and I love it. I have spent a lot time reflecting.

"There is no discussion about racism. It is just intolerable.

Rana Naved-ul-Hasan, an ex-patriot seamer, was the second player in the first-team to claim racism at Yorkshire. She claimed that "systematic taunting” took place at the club.

Tabassum Bhatti and Irfan Amjad, former players from Yorkshire Academy, have shared their stories of racism during their time at the club.

Rafiq and senior Yorkshire officials will be giving evidence to the Digital, Culture, Media and Sport select panel hearing on 16th November. Along with Mark Arthur, chief executive and former chairman of Yorkshire, Hutton will be interrogated by MPs.

Hutton was among several board members who resigned last Friday over the club's response against Rafiq's racism.

Monday's new chair Lord Patel stated that Rafiq should be praised for his courage and that Yorkshire's racism scandal "should not have been exposed to him."

Yorkshire announced Tuesday that Andrew Gale, head coach of the Yorkshire Cricket Club, was suspended in an investigation into a 2010 tweet. Martyn Moxon, director of cricket, was also absent due to stress-related illness.

Root, who will be leading England in the Ashes Test on December 8, stated: "We need to find a way forward and ensure that this does not happen again. This is a social issue that needs to be addressed beyond cricket.

"That said, we all, as a sport have to do more. What can we do to make the game more positive? How can we all, including myself, the ECB and the counties, players, officials, and officials, help improve the condition of the game?

"I don't know all the answers but I believe we should educate more early. We must be able to call it out immediately and keep our ears open more.

"Inclusivity and diversity are three of the most important things that the England teams I've been involved with have talked about over the years and are passionate about making a difference.

It's an important part of our culture and we want to celebrate it. We represent England and the multi-cultural society in which we live. We want everyone to enjoy the game and be proud of the person who represents them.

19 August 2021: Yorkshire, which has yet to release the results of the report, admitted Rafiq was "the victim in inappropriate behavior" and offered him "profound apology."

10 September 2021: Yorkshire releases the report. It states that Rafiq was the victim of racial harassment, bullying, and seven of the 43 allegations were supported by an independent panel.

28 October 2021: Yorkshire claims that they conducted their own internal investigation following the report's findings and concluded that there was no misconduct or action by any employees, players, or executives that would warrant disciplinary action.

Julian Knight, MP and chair of DCMS select committee, has called for the resignation of the board of Yorkshire County Cricket Club after a leaked document emerged that apparently contains details about the investigation into Rafiq's treatment.

Knight's comments were made after Sajid Javid, health secretary, calls for "heads-to-roll" at Yorkshire. He said that if the ECB didn't take action, "it's unfit for purpose". In a tweet, Knight stated that Rafiq's term was "not banter".

8 November 2021: Lord Patel apologizes to Rafiq for his incontinence since his appointment and states that the club has resolved the employment tribunal with their ex-player.

Irfan Amjad is a former player at the Yorkshire academy. He claims that he was racially assaulted by Yorkshire staff members when he was 16.

9th November 2021: If Yorkshire and the ECB fail to take "real action", the government will "step in".

Tabassum Bhatti, another academy player, claims he was subject to racial abuses at the club when he was 14 years old.

10 November 2021: Yorkshire announces they will investigate after the club's head for human resources called a fan "a coward" while accusing Rafiq and the fan of "waging an anti-club campaign on social media."
2021rootrafiqjoehuttonsportscandalracismclubyorkshirereportgamecricketfracturedinvestigation
2.2k Like