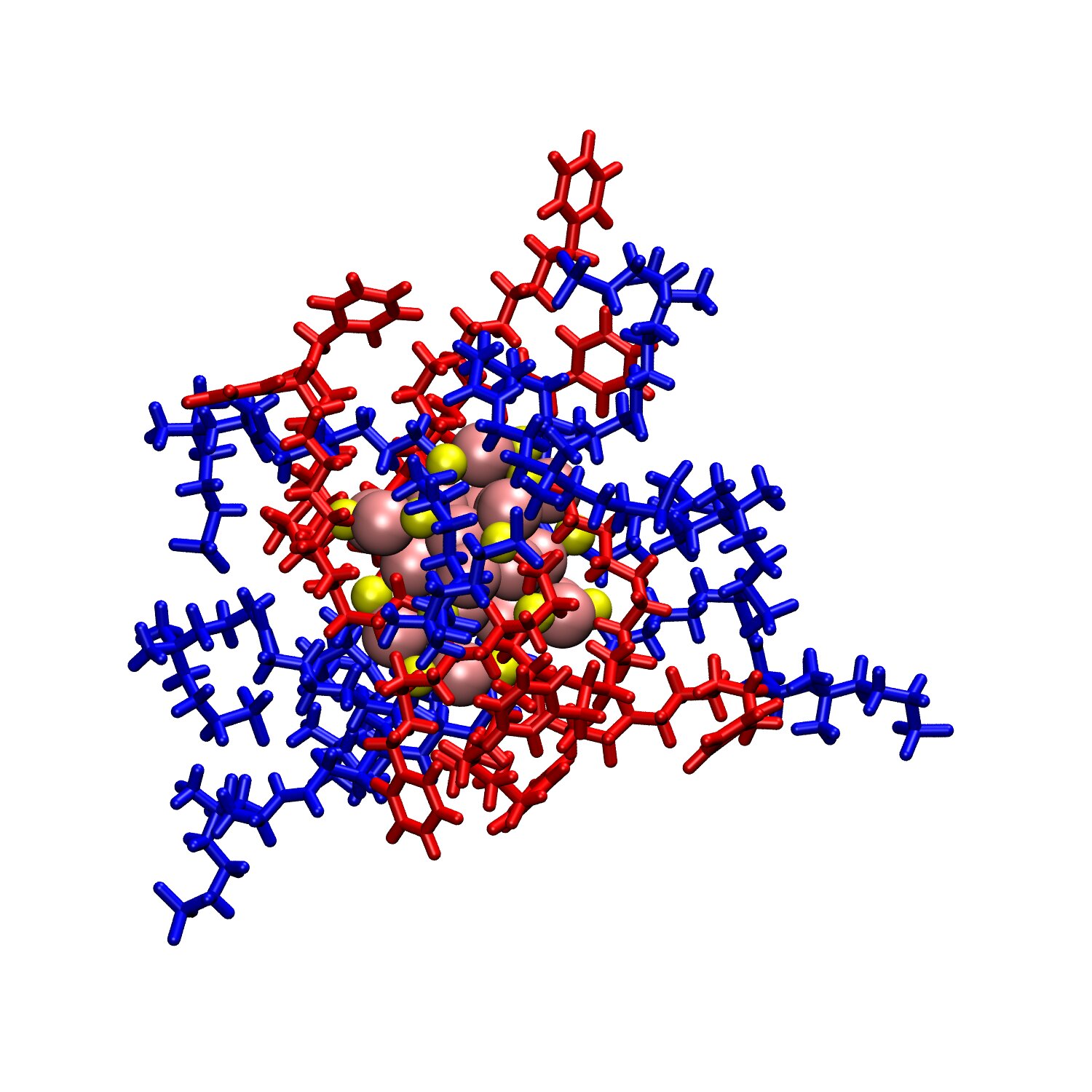 The "molecular envelope" of the gold nanoclusters. Blue ligands are the zwitterionic, while red ligands are positively charged. They are bound via thiol molecules to the Au25 cluster in brown. Credit: University of Leeds
Research just published suggests that tiny gold particles could be the new weapon against antibiotic resistance in bacterial infections.

Scientists are investigating the possibility of using gold nanoclusters, each made up about 25 atoms gold, to target and disrupt bacteria cells. This makes them more vulnerable to standard antibiotic treatments.

The World Health Organization released a report last year stating that antibiotic resistance is increasing to dangerously high levels all over the globe. It called for more investment to address the problem.

Researchers have known for years that gold nanoparticles have antimicrobial properties. However, they have not been able to get the nanoparticles to the source of a bacterial outbreak without causing damage to healthy host cells.

A team of international scientists from Fudan University, Shanghai and Southern University of Science and Technology, Shenzhen, have now found a way to package the gold nanoclusters within a molecular envelope. This makes them less toxic to healthy tissue and does not affect their antibacterial properties.

Laboratory tests have demonstrated that the approach kills a variety of bacteria. Some of these bacteria are resistant to standard antibiotic treatment.

These findings were based on laboratory research and not patient trials. They have been published in Chemical Science.

Scientists found a solution by using electrostatic forces in nature.

Bacterial cells are more negatively charged than those of mammals. The idea that opposite charges attract means that the gold nanoclusters are wrapped around a positively charged molecule, called a "ligand". It acts like a carrier bird, finding and delivering the nanoclusters to bacteria cells. They disrupt the cell membrane.

The cell membrane is broken, increasing the permeability of bacteria cells to standard antibiotic treatments. This gives new life to antibiotics that have been ineffective or losing effectiveness against resistant bacteria.

Problem is that the positively charged molecules wrapped around each cluster are also toxic to healthy mammalian cells.

The scientists added a second ligand around each nanocluster to protect host cells. These molecules are known as zwitterionic group, and they have both negative and positive charges. They are also found in cell membranes in mammals. This makes it easier for gold nanoclusters and host cells to interact with each other.

The scientists tested whether gold nanoclusters could reduce the resistance of bacterial cells in laboratory experiments. If so, it would make them more vulnerable to antibiotic treatment.

They used a bacterial strain known as methicillin-resistant Staphylococcus epidermidis, which can be responsible for some hospital acquired infections.

The researchers tested three antibiotics, each representing a class antibiotic, against MRSE with or without the gold nanoclusters.

The antimicrobial effects of antibiotics that were used together with gold nanoclusters had an enhanced effect. One class of antibiotics resulted in a 128-fold reduction in the amount required to inhibit MRSE growth.

Dejian Zhou is a Professor of Nanochemistry at Leeds University and one of the researchers. He stated that "despite extensive research in antibacterial materials, most of the research has focused only on increasing antibacterial potency without considering biocompatibility, stability, and ability to be excreted out of the body." These are critical requirements for clinical approval. Many of the promising antibacterial micromaterials won't be able to progress into therapeutic agents for use in medicine.

"By tuning the ratios of the two ligands we have found a way to use gold nanoclusters as effective antimicrobial agents as well as as a mechanism for increasing the effectiveness of antibiotics that have been rendered ineffective due to bacterial drug resistance.

"The research has an important significance for the way we should think about responding to antimicrobial resistant."

Professor Zhou hopes the pharmaceutical industry will take notice of his research findings. Combing existing antibiotics with gold nanoclusters will provide a quicker and more affordable alternative to the development of a variety of new antibiotics to combat bacterial antibiotic resistance.