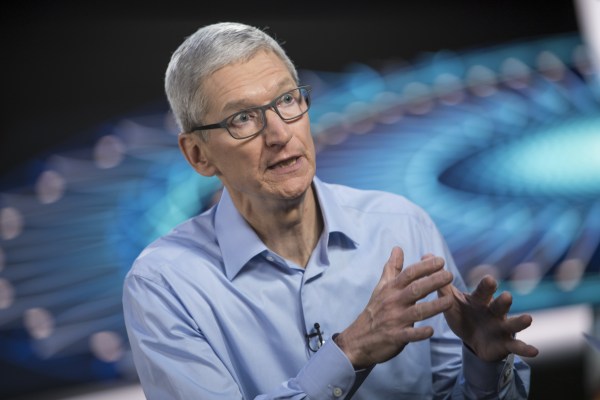 Today's interview at the NYT Dealbook Conference saw Apple CEO Tim Cook confirm that the company is looking into cryptocurrency but also clarify that it has no immediate plans to launch any crypto-related products. Cook didn't give any details about the areas in which the company might be looking into crypto, but he noted that there were many areas within Apple's business where he wouldn't consider introducing cryptocurrency offerings.
Andrew Ross Sorkin asked Cook if Apple would accept cryptocurrency via Apple Pay. Cook answered that it was "something we're looking into."

"I would describe it as there are some things I wouldn’t do -- such as our cash balance. I wouldn’t invest that much in crypto. This is not because I wouldn’t invest my own money into crypto, but because I don’t believe people buy Apple stock to be exposed to crypto. Cook explained that they have other options if they wish to invest in crypto directly.

Cook stated that Apple does not intend to accept crypto as a tender for its products.

He did however insist that crypto was on his company's radar and said "there are other items that we're certainly looking at" in relation to crypto. However, he stated that Apple has nothing to announce about the matter.

Apple Pay competitors such as Venmo and PayPal have all made moves into the crypto space in recent weeks. It would therefore be strange if Apple didn't weigh making similar moves. Cook confirmed to Sorkin that he is open to investing in crypto currencies.

Cook stated, "I believe it's reasonable for it to be owned as part of a diversified portfolio," adding, with a laugh: "I'm no giving anyone investment advice by any means."

The executive continued to say that he has been interested in cryptocurrency since a long time.

He also said that NFTs are intriguing, but that it will take some time for them to be interesting to mainstream people.

In a larger interview, the interview covered other important topics for Apple and the wider tech industry. This included Apple's position regarding security, privacy and opening the App Store. Epic Games is currently suing Apple over this matter in an antitrust court case.

Cook got straight to the point about user choice. He noted that customers already have the option of choosing when they purchase a phone. Sideloading allows users to download apps from outside the app store.

Cook stated that "I believe people have that choice today...because you can sideload, and you can purchase an Android phone." That choice is available. If you're serious about buying an Android phone, you can go to a carrier shop.

Sideloading, in Apple's view, is too risky. It's also a way for Apple to lose millions of dollars today through the App Store and In-App Purchases, where it takes a cut of developer revenue.

Cook spoke about AR technology in general, but did not comment on Facebook's latest VR plans with Meta, or any possible Apple projects involving cars. He noted that Apple does not like to talk too much about the future.

He also detailed Apple's position on politics, noting that the company doesn’t have a political action committee (PAC), and defended Apple's service to the Chinese market.

He said, "I believe that as a company, we have a responsibility to do business wherever possible, because business is a huge catalyst." "I believe we should not pull up the drawbridge. Building bridges should be our goal. That's what I believe is key to business success. He said that we all speak up about different topics, and we both do so privately as well as publicly.
cryptocookceothinktimwouldntbusinessinvestlookingappleapplesspeakchoicetechcrunchcryptocurrency
2.2k Like