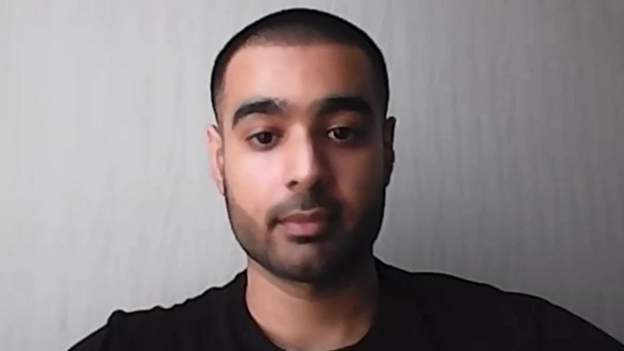 Last update on. From the section Cricket
Irfan Amjad, then 16, was the victim of racist language.

In the latest racism accusation against the club, a former player from Yorkshire academy claims that he was racially molested by a staff member as a 16 year-old.

Later, Irfan Amjad was released. He claims that a staff member used a term that referred to his Pakistani heritage in order to criticize his batting style.

Yorkshire County Cricket Club stated in a statement that it was important for those who have suffered racism, discrimination, and abuse to be able to speak out.

"We didn't know about this allegation, but we will investigate."

Amjad's decision not to speak to BBC comes after Azeem Rafiq's detailed account of his experiences in Yorkshire, which he first shared publicly in September 2020 and that left him close to suicide.

Rafiq, a former Yorkshire player, was the victim of racism harassment and bullying. However, the club denied that it would discipline anyone.

The handling of Rafiq's issues by Yorkshire was widely criticized. ESPN reported on 1 November that Rafiq used a racist term about Pakistani heritage. However, the investigation found it to be friendly and pleasant banter.

Yorkshire launched a second investigation last week. An anonymous former player claimed that he was the victim of repeated racist abuses at the club.

Amjad recounted his experiences and said, "On one occasion, when we were playing a game at home, I had played an aggressive shot while batting. The ball went up in air and I was caught out.

"I was walking to the dressing room when, as I got in, I noticed that a man came in and began taking off my helmet and pads. He looked at me in the eyes and marched through the door."

The individual then used the racist term to refer to "a typical shot" taken by people of Pakistani heritage.

"Even before the incident, I felt distant. It happened and I felt isolated afterwards. Moving forward, I felt that I couldn't speak out or offer my opinions on the game at team meetings.

"It crosses your thoughts [reporting it], but I was 16 years old and didn't know what I should do." It was something I kept to myself.

"No one else shared their experiences and I didn’t share mys." If I had opened up, others who have experienced similar problems might have also.

After Rafiq's story, this is the latest racism allegation to surface in Yorkshire.

Rana Naved-ul-Hasan, an ex-patriot seamer, was the second to accuse Yorkshire of racism. She claimed that "systematic taunting” took place at the club.

Lord Patel, the new chair, said Monday that Rafiq should be praised for his courage and that he "should never" have been subject to the Yorkshire's racist scandal.
incidentrafiqyorkshirelatesttermexacademyracistallegesdidntrafiqsusedclubplayerpakistaniracisminvestigate
2.2k Like