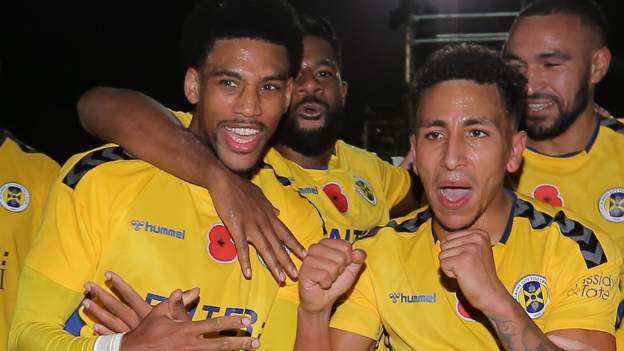 Rovers were in control from the start thanks to Matty Stevens, but in less than four minutes Mitchell Weiss scored and Zane Banton scored for the part-timers.

Saints were still impressive after the break when Shaun Jeffers won a well-deserved win.

With 13 minutes remaining, the striker shot into an unguarded goal after Weiss had taken advantage a Kane Wilson slip and slid in the top scorer of the non-league side for his 18th goal.

St Albans, who had a part-time team that included a postal worker, engineer, and personal shopper, entered the match with a 14-game unbeaten streak. They were second in National League South and displayed remarkable commitment against high-flying full time rivals.

Rovers made six changes to the team that drew 1-1 at Bradford City last Wednesday. However, they had the advantage of early possession. Their non-league rivals could have taken a surprise 13-minute lead if Jeffers had found the target from 12 feet with his second attempt after his first was blocked.

League Two's leaders seemed to be in their stride, as Stevens scored his 10th goal of season shortly after he received Nicky Cadden’s cross at the near post. He missed two great chances shortly afterwards.

After the historic win, St Albans players were mobbed by fans

St Albans, however, sent Clarence Park's crowd of 4,000 into raptures with their two quickfire goals. First, Weiss glanced in from John Goddard’s whip cross before the impressive Banton. A carpenter by trade, Banton coolly finished low under Luke McGee 12 yards away.

Forest Green, League Two's joint-top scorers, created more chances when Michael Johnson failed to tip over Josh March's attempt before Moore-Taylor crossed the line with a 34th minute header from a corner. Moore-Taylor then fired a shot just wide at the far post.

Rovers broke through the resistance of the hosts when Aitchison, after receiving a pass from Ebou Adams, arrowed home from the box on the angle.

Part-timers worked hard for the victory, frustrating their full-time competitors as the second period progressed.

They nearly went in front after Goddard's brave attempt to block Adams' attempt from eight yards away, just before Jeffers scored with 13 minutes remaining.

Saints held Rovers off for a few more minutes, before Johnson was able to save his legs from Aitchison. On the follow-up, Johnson and Aitchison were unable to stop March's march with a brilliant sliding block.

"This is incredible, this is the stuff of dreams.

"We had Forest Green at our home, and they are top of the league and flying.

"But we knew we had a chance. We were unbeaten in 14 and 15 games, and we're currently on a good run. So we felt confident."

"I am extremely proud. We had to take our luck at times, but they are a positive side.

"But the boys refused to give up and you give Shaun half an opportunity he will take it, and he has succeeded in doing that.

"Michael made some good saves in goal, but second half was comfortable. I felt that first half we had our luck a bit.

"But the boys were outstanding. They've been like this all season, and they deserved it today.

"It's fantastic news for the city. It's something they have been waiting for a long time.

"I'm so happy for the club, the players and the fans because it's such a great day and they haven't had days like these many times."

"We wanted to make progress in this competition, and I want St Albans to be credited first and foremost. That's the right thing.

"They deserved it. It's their night tonight. The magic of the FA Cup has brought them what they deserved.

"We conceded some sloppy goals, and we didn’t put it in front of the net at one end when we had opportunities. That's the crux of it.