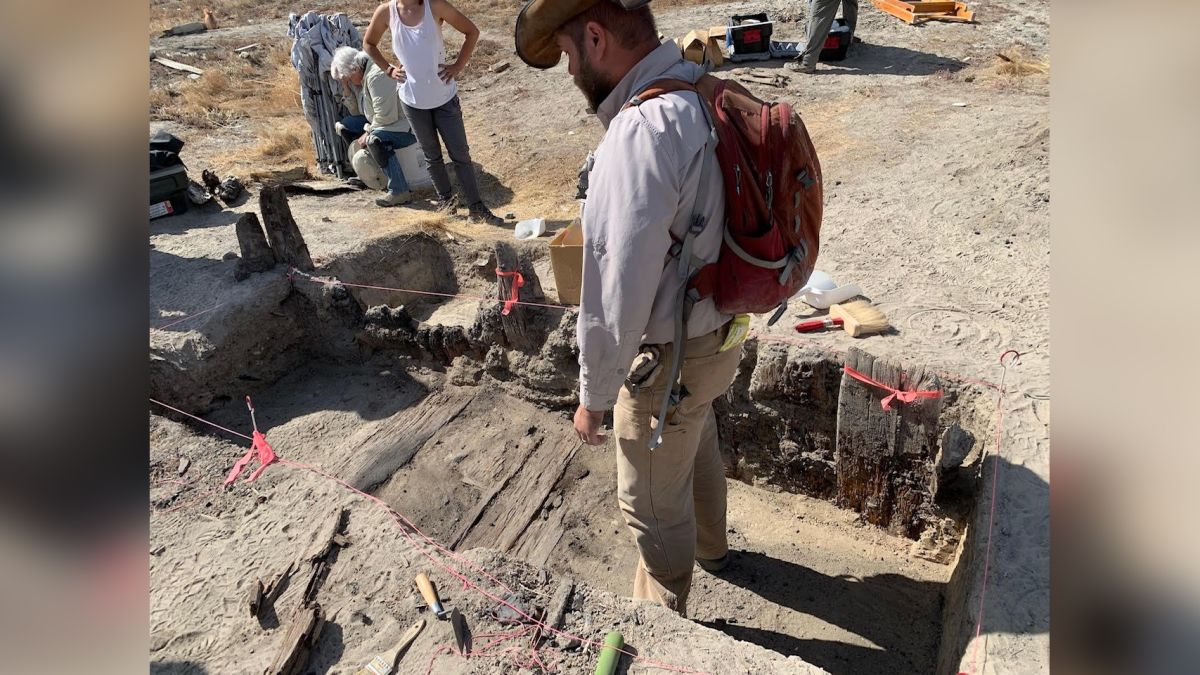 Christopher Merritt, Utah's state historic preservation officer, examines floorboards found in an excavated Chinese home in Terrace, Utah. This home was likely to have been home to between two and four Chinese railroad maintenance workers. It was built in 1869. This home was the first to be fully excavated by a Chinese worker on the transcontinental railroad.
An archaeologist digging in a Utah ghost-town discovered a rare find: a house that belonged to 19th-century Chinese workers who worked on the transcontinental railway.

Now, the house is just a layer on top of the floorboards that are scattered with artifacts like Chinese coins and stoneware. It is the first ever completely excavated Chinese residence on the transcontinental railroad. The railroad was built by more than 11,000 Chinese immigrants. It connected the Eastern lines of Iowa with the San Francisco Bay. Christopher Merritt, the Utah Division of State History's state historic preservation officer, stated that these workers are often not included in historical documents dating back to the late 1800s. Terrace's map didn't show a Chinatown.

Merritt stated that being able to open a whole house the first time gave us an interesting lens on the Chinese railroad worker community.

Related: 15 amazing places on Earth that have been frozen in time

Image 1 of 5. According to Golden Spike National Historic Park, Utah, more than 11,000 Chinese workers contributed to the construction of the transcontinental railway. Six days per week, the workers had to endure 10-12 hours of labor in both cold and heat. The Historic Park states that they initially received less than other workers. Although their wages were eventually raised to the same extent, the workers still experienced discrimination and segregation. Image 2 of 5. A porcelain Chinese bowl over 100 years old looks much like the dishware you find in China today. Image 3 of 5, A miniature arm taken from a Terrace figurine. The ghost town site was abandoned in 1904 and archaeologists discovered between 10,000 to 20,000 artifacts. These artifacts have been preserved at the surface by their remoteness and desert environment. However, large materials such as railroad ties were removed for scrap in the 1940s. (Image credit to Christopher Merritt. Image 4/5 Glass fragments are common at the Terrace ghost-town site. In 2020, archaeologists carried out two digs there. At its peak, the town was home to approximately 500 people. However, many of the buildings were damaged by fire in the early 1900s. Image 5 of 5. Christopher Merritt, image credit. There are very few historical records that can be found about Terrace's Chinese community. It was probably the third largest in Utah at its peak. The population was 56 at the time of 1870 census records, which is just over 10% of the total town population. However, this may have been an underestimate. Merritt explained that most railroad records of employment were destroyed by the 1906 San Francisco earthquake and fire. This Chinese coin, which is made from a Chinese coin, shows the exact location of Terrace's Chinatown. (Image credit to Christopher Merritt

Terrace was born in northwest Utah in the late 1860s when the railroad was built. At its peak, it was a railroad maintenance community that was home to 500 people. The railroad opened a cutoff route that ran across the Great Salt Lake in 1902. This meant that workers wouldn't have to travel around the lake or through Terrace. Terrace was gone by 1904.

Although much of the main street was destroyed by a fire in the early 1900s, artifacts were left scattered around the site. Merritt stated that vandalism and looting are both common problems. However, the artifacts were a "time capsule from a boomtown" and state archaeologists wanted to investigate and protect it.

The archaeological team worked closely with the Utah-based Chinese Railroad Workers Descendants Association to conduct two digs at this site.

Merritt stated that there is a staggering amount of material culture and artifacts found on the ground. The dry desert climate preserved 10,000-20,000 items, which archaeologists collected. These items revealed something that was not found on any map: Terrace's Chinatown.

The transcontinental railroad and Chinese culture

Based on artifacts like Chinese coins, gaming pieces and fragments of Chinese porcelain bowls, the researchers were able to determine where the Chinese workers lived in Terrace. They also found stoneware that could have been used for holding soy sauce or vinegar. Merritt explained that these goods came from China and would have crossed the Pacific via ship to San Francisco. There, workers loaded them onto a train to get to this "podunky" little town. Volunteers and archaeologists found preserved Chinese dates, peanut shells, and melon seeds at the site.

Merritt stated that 56 Chinese workers were living in Terrace during the town's peak at 1870 Census. However, Census records often underestimate minority and immigrant groups. At its peak, the town was home to as many as 100 Chinese workers. He said that there was no legal requirement to segregate these workers from the town's white residents. However, discrimination and racism kept them apart.

However, the researchers found evidence of at least one Chinese-owned business on the main street. Although the type of business was not clear, archaeologists discovered evidence of Chinese liquor jars and stoneware in a building foundation. Merritt speculated that it could have been a grocery, laundry, or restaurant.

Merritt stated that while we don't yet know the answer, at least we now have one point of reference that indicates that there was a Chinese presence along Terrace's main street.

Researchers now plan to examine more of the artifacts found at the site and try to uncover more stories about the workers who made transcontinental railroad possible. Utah policymakers hope to preserve Terrace. KSL.com was informed by Karen Kwan (the president of the Chinese Railroad Workers Descendants Association), that she will introduce a resolution to highlight the importance of ghost towns such as Terrace in the upcoming legislative sessions. To inform visitors about the location's identity and discourage looting, new fencing and signage were also erected.