Here are the 6 House Democrats that voted against the $1.2 trillion bipartisan infrastructure bill 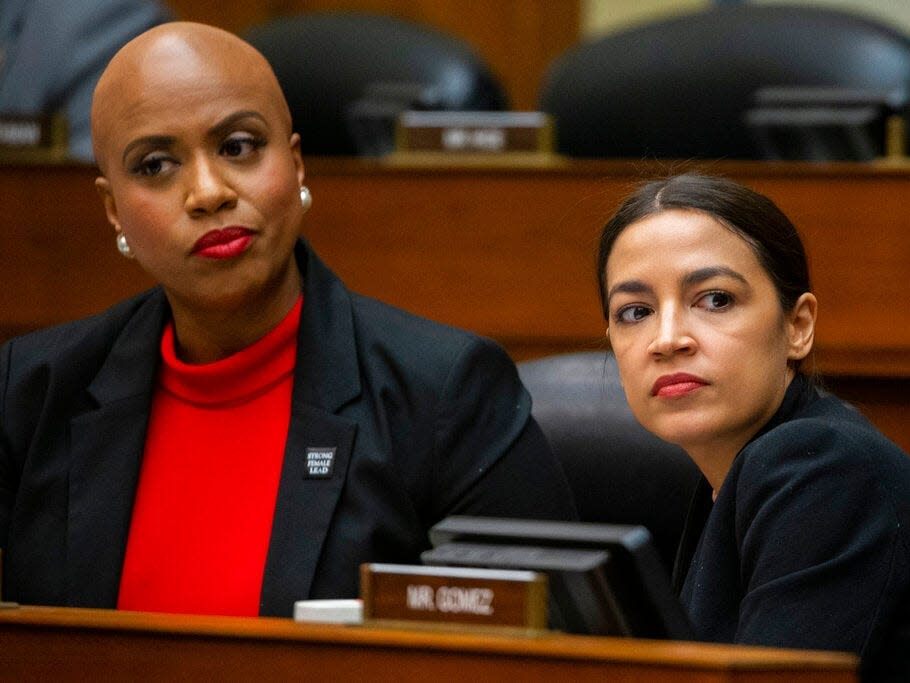 This House Television image shows the vote total of 228 -206 as the House of Representatives approves $1.2 trillion in road and infrastructure projects. The House of Representatives approved the package after Democrats ended a long standoff between moderates and progressives. House Television via AP
Six House Democrats, who form "The Squad", have rejected the $1.2 billion infrastructure bill.

Members warned that they will only support the passage of both infrastructure bills together.

The bipartisan bill was supported by 13 House Republicans. This resulted in a 228-206 vote.

Friday's approval by the US House of Representatives of the bipartisan $1.2 trillion infrastructure bill, championed in part by President Joe Biden (Democratic Leaders) was 228 to206. The legislation attracted the support of 13 Republicans and moved to the desk of the president for his signature.

Officially known as the Infrastructure Investment and Jobs Act (IIJA), the legislation was a key tenet in Biden's agenda. It focused on fixing the nation's crumbling transportation system, as well as increasing access to broadband connections and setting up a network for electric vehicle chargers.

The legislation remained in Congress, despite being approved by the Senate in a bipartisan vote of 69-30. This was due to internal party disagreements over the content of the larger Democratic-led reconciliation bill.

Progressives wanted the House leadership to place both bills on the ground for a vote simultaneously, while moderates wanted a vote on bipartisan bill without linking it to the larger bill. This was still the subject matter of debate about its scope and size.

Nancy Pelosi, the House Speaker from California, unfastened the bipartisan bill of the Build Back Better act. This led to the package's success. Several key moderates signed on to an agreement that would allow them to support the reconciliation bill after its fiscal impact is known.

Six progressive Democrats, all members of "The Squad", voted against the legislation late Friday.

These are the members:

"The Squad" insisted that both bills be passed together

Bush rescinded his support for the bipartisan infrastructure bill, even though it did not include the Build Back Better Act.

She tweeted, "Conservative Democrats want to tell my community we should shut up and accept half-deals." "St. Louis sent my to Congress to do what was best for us all. We will not accept anything less than what the President has in his full agenda. "The people must win."

Bowman, Tlaib and Ocasio Cortez have stated for months that they would like to see both bills on the House Floor together to support the bipartisan infrastructure bill.

Omar stated Friday in a statement that she had been firm in her support for both bills being passed together. This position she did not abandon.

Biden praised the legislation after it was passed, calling it "a once in a generation bipartisan infrastructure bill that will generate millions of jobs, transform the climate crisis into a chance, and set us on a path for winning the economic competition for 21st Century."

He said, "It will create high-paying jobs that cannot be outsourced." The largest investments in freight and passenger rail, roads, bridges and ports in decades will create jobs that will transform the transportation system. We will make America a leader in manufacturing solar panels, wind farm, batteries, and electric cars. This will allow America to expand its supply chain, reward companies that pay good wages, and allow them to export their products and technologies around the world.

Business Insider has the original article.
votedbipartisanvotebuildlegislationbills12supporttrillioninfrastructurebetterhousebilldemocrats
2.2k Like