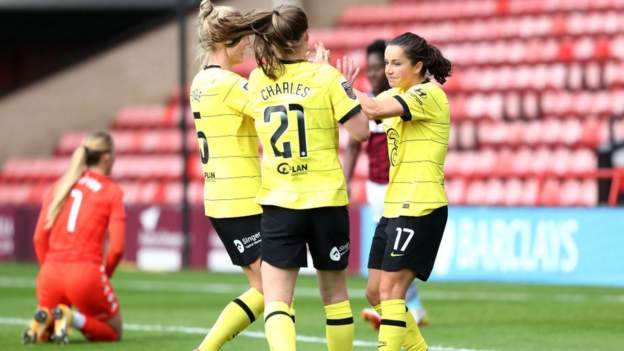 After a 1-0 win over Aston Villa at Banks's Stadium, Chelsea moved up to the top of WSL points with Arsenal.

Emma Hayes' team won a fourth consecutive win in all competitions with a goal by Jessie Fleming in the first half.

It was a dominating performance that left Villa without a win in four.

Carla Ward's side put pressure on the other end, but did not manage to score a single shot.

Ji was a threat all through and nearly doubled the Blues' lead with a shot off of the bar. Erin Cuthbert then saw her strike hit the woodwork by Villa goalkeeper Hannah Hampton.

Hampton was forced to make a huge save from close range by Beth England soon after the break. Cuthbert then had another shot blocked by Chelsea.

Villa rallied to the end but couldn't find an equaliser, as the champions won the match.
chelsea01flemingsgoalpastseesastonshotrangewinvillaleadwslcuthbertclosejessieblues
2.2k Like