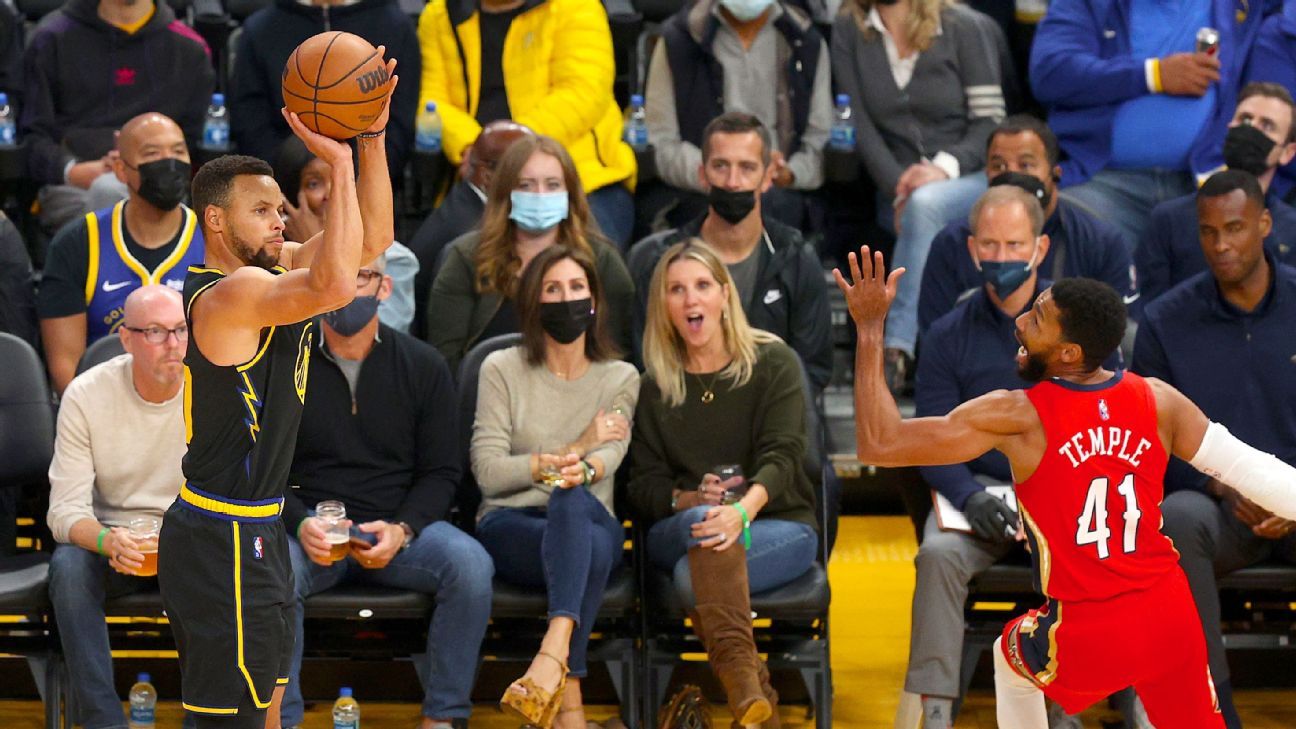 SAN FRANCISCO -- After starting the season 7-1, the Golden State Warriors have quickly become the talk of the NBA. They look like the dominant two-way force they were during their championship reign.
Star guard Stephen Curry expressed surprise at how quickly his team started the year after Friday's 126-85 win over the New Orleans Pelicans.

Curry stated, "We have guys who understand basketball and how to play." Curry said that there are always good intentions behind what we do, even if it doesn’t work out. ... We all want to do the right thing and to understand how we can create shots. Then, defensively, we must rely on our principles every night.

"The record is great. Eight games in, there's still a lot to go, but I'm not surprised by the way we're succeeding, the way we're opening up games and just putting together good basketball stretches, it's not surprising at all."

Curry was praised by many of his teammates for sharing his feelings on a night when the team outscored Pelicans' bench 57-30. They also shot 52.2 percent from behind the arc. The Warriors have a deep, talented roster that includes a mix of young and veteran players. They continue to enjoy an eight-game homestand in early January.

"I've seen a lot and played for many different coaches. Andre Iguodala, a veteran swingman, said that he has been in many different settings. Take a look at the league to see how teams are organized, how they play, and how the game is being played. It's easy to compare yourself with other teams. Two of our starters were out (Klay Thompson, James Wiseman), so we had an opportunity to do something extraordinary. But we also got the chance to keep trying and getting better each day and finding our weaknesses before other teams.

The Warriors' start is especially interesting because they are not playing with Thompson, who is still recovering from an ACL/ Achilles injury, or Wiseman who is still healing from a meniscus injury.

Both players will be back in the next weeks but it is clear that the Warriors' new team, which includes Curry and Draymond Green, has found a strong early rhythm. Steve Kerr, Warriors coach, specifically cited veteran Nemanja Bilica (13 points, game-high plus/minus 33 in Friday's win) as an example of how everything is working.

Kerr stated, "Everybody loves playing together." "Belli, you see how skilled and the way we play make him a focal point of the offense as a passer, not as a pick-and pop shooter. He loves to pass and play-make. This is what he did growing up, and it's obvious that he can do it well. It's great to have a group of guys who can all move the ball and can perform the moves. They're having fun. They're also having fun with their coaches."

Green summarised those feelings well throughout, especially after Gary Payton II's monster dunk that had Green jumping up and down from the bench, and then celebrating on the ground.

Green laughed off praise when asked about Friday's game and whether he enjoyed the league taking notice of the Warriors.

"I think this team is improving. There are many things that we could improve on. If we can make those improvements, we will be a more dangerous team. But what do we have 6-1, 7-1? There are still a lot of games to play. We had to continue improving and embrace the process. ... It's all about continued growth. If we can keep growing, the sky is the limit.
statethinkgoldengamesthingsleaguecurry71wayunderstandteamsveteranwarriorssurprisedteamstephenstartlot
2.2k Like