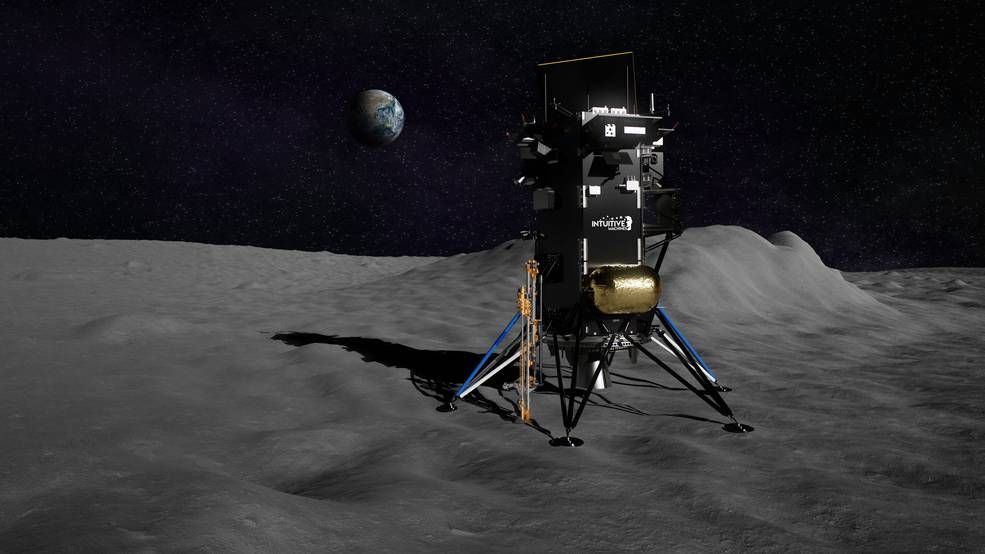 Illustration of the Nova-C private moon lander, built by Intuitive Machines and NASA's Polar Resources Ice-Mining Experiment-1 (PRIME-1) attached.
NASA has set its sights at the moon's South Pole in its search for ice.

The space agency and Intuitive machines announced this week that the Shackleton Crater landing location at the south pole was available for a small lander. It will launch next year. According to NASA data, this location is known as the "Shackleton connecting Ridge" and the agency released a statement Wednesday (Nov. 3) indicating that there may be ice below the surface.

NASA's Polar Resources Ice-Mining Experiment-1 is part of the robotic mission. It requires solar power and an Earth view for communication. NASA stated that the ridge zone should provide both.

Related: Space history's most important missions to the moon

Jackie Quinn, the PRIME-1 project manager at NASA’s Kennedy Space Center in Florida stated in the statement, "Finding an landing site where we might discover Ice within three feet of its surface was difficult."

Although there is enough sunlight to power the payloads' solar panels, the surface becomes too hot to support ice within the reach of the PRIME-1 drill. We had to find the 'goldilocks site' that would get enough sunlight to fulfill mission requirements while still being safe and offering good Earth communications.

NASA views the PRIME-1 mission in a crucial way to learn how to extract resources from the lunar surface. NASA plans to launch a series of longer human missions on Artemis later in 2020. NASA says that in order to sustain such an effort, engineers and scientists must practice in-situ resources utilization (ISRU), which refers to the use of resources in the local environment.

PRIME-1 will deploy the drill called The Regolith Ice Drill to Exploring New Terrain (TRIDENT), that will burrow to as much as 3 feet (almost one meter) below the surface. A mass spectrometer will be used to measure volatiles. These are elements and compounds that can easily change from liquid to gas.

NASA will use the lessons learned from PRIME-1 to prepare for the Volatiles Investigation Polar Exploration Rover (VIPER), a more ambitious lunar exploration rover mission that will also land at South Pole in 2023. The agency revealed that VIPER's landing spot would be west of Nobile in September. This is a crater close to the moon's south Pole.

Other technology demonstrations will be conducted on the Intuitive Machinery lander, Nova-C. Nokia, for example, will be testing a 4G and LTE network that is "space-hardened", to try high-speed connectivity on the surface. Micro-Nova, an Intuitive Machines rover-hopper, will attempt to collect data and pictures from a nearby crater.

Intuitive machines, Astrobotic, and Orbit Beyond were all selected for NASA's Commercial Lunar Payload Services initiative (CLPS). CLPS is a private company-based program that allows science experiments and demonstrations of technology on the moon to be tested. CLPS selects companies from a pool that is qualified to be NASA's next mission partners.

NASA Announces a Dark, Eerie Moon Landing Site For Its Next Rover Mission