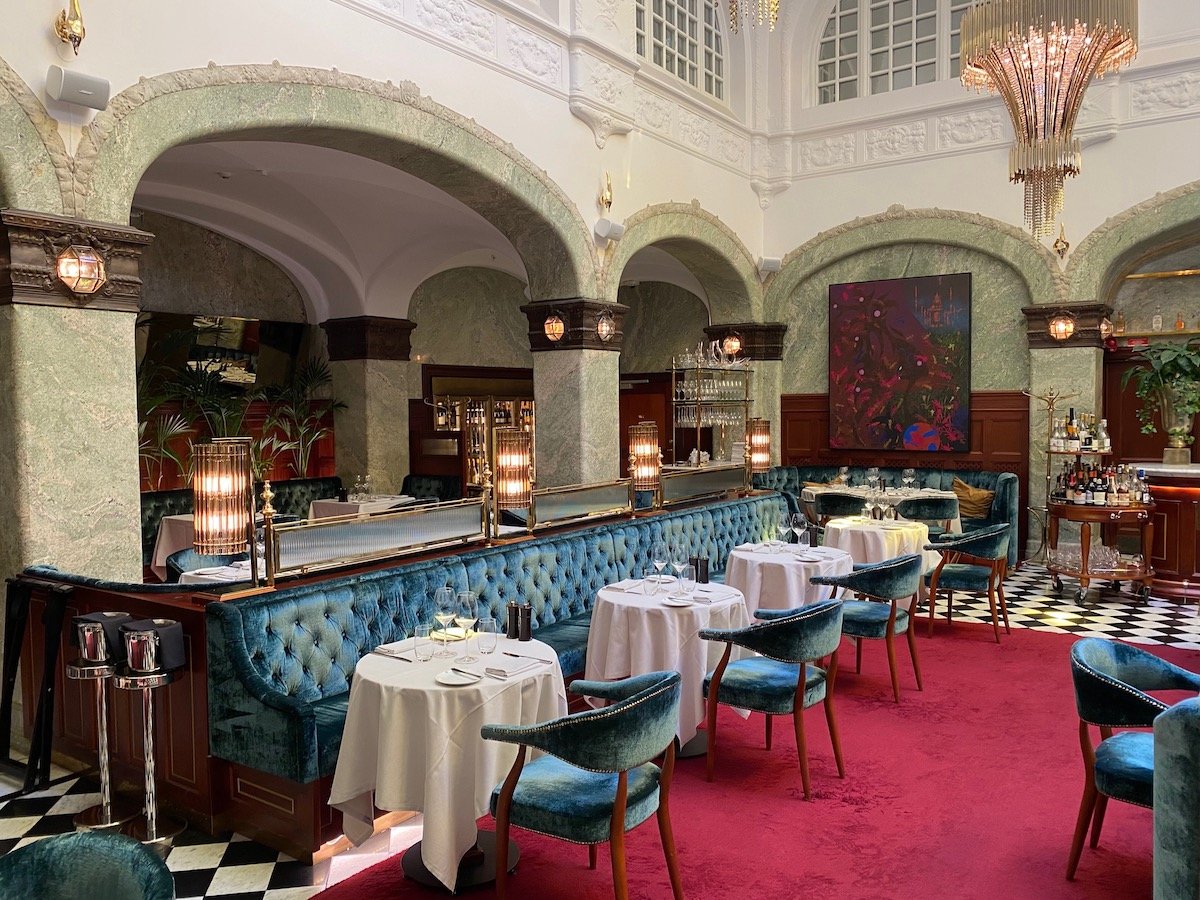 We stayed at the Bank Hotel, a 115-room hotel for our four nights in Stockholm. It is widely regarded as one of the best hotels in the city. The Bank Hotel is also affiliated with Small Luxury Hotels of the World (World of Hyatt) which is the cherry on the top for points-lovers.
Why and how we booked Bank Hotel Stockholm

Stockholm is not known for its incredible hotels. Although Grand Hotel is often considered Stockholm's best hotel, it doesn't belong to any major hotels groups and looked old to me. As someone who loves points I made sure to check out the properties of major hotel groups. Hyatt, Hilton, and Marriott offer very few luxury options in Stockholm.

The cash rate for our dates during peak summer was $450 per night. We could also redeem 20,000 World of Hyatt Points per night for this property. I love Hyatts partnership in SLH.

The Bank Hotel is in a prime location in Stockholm. You can find amazing restaurants and shopping nearby.

It is located on a side street so there is very little street noise. It also means the hotel has very limited views.

Bank Hotel's grand entrance features a red carpet that runs up a flight of stairs. The reception was located in the lobby to the right.

We were assisted immediately by a friendly associate who checked us in within minutes. The room we were assigned was room 501, an Elegant Exceptional Room. The Hyatt & SlH partnership allows you to upgrade your room.

Breakfast was included and the employee explained many of the hotel's features including the gym and dining options.

There was only a small sitting area in the lobby. Restaurants and bars occupy most of the hotel's public spaces, which is quite understandable.

We had our keys and took the elevator to the fifth floor. There are eight floors in the hotel. Our room was located at the end.

Most hotel rooms in Europe are small. However, this room was quite spacious and well-designed. The room was described as measuring between 280 and 320 square feet. This room had an entrance with the bathroom to the left, and a closet on the right. The rest of the space was straight ahead.

The bed was located to the left when you get into the main room. Although the pillows and mattress were very thin, that's probably normal in Northern Europe.

A sitting area was located across from the bed, with two chairs as well as a side table.

At the opposite end of the room was a table that contained a bench, a minibar and a wall-mounted television. Although the bench was not ideal for back support, it was still fine.

A complimentary Lavazza coffee maker was included in the minibar, along with a selection of beverages and snacks.

A welcome gift included fresh strawberries and a vitamin antioxidant beverage. It was quite interesting to see the welcome note written in Swedish. This was especially important since my World of Hyatt account had been linked. I assume they also knew my address.

The room overlooked the rooftops of nearby buildings. It was quite quiet but not difficult to see. The windows did not open very much.

The bathroom was located back from the entrance and contained a sink, toilet and a walk in shower.

The shower was perfect in water pressure and featured both a handheld and rainforest head.

The toiletries were Diptyque and the smell was wonderful. It was difficult to squeeze liquids from the bottles due to the fact that they were so sturdy.

Here are a few more details about the space:

Wi-Fi was free and fast. The only problem was that you had reconnect each time you used it. This was annoying.

Although this shouldn't be an issue most of the year it was for me. The room got warm in the day and the air conditioner wasn't great (though it wasnt horrible). Fortunately there was a fan.

Overall, the room was well-designed and furnished. However, there were some areas that could be improved, such as the comfort of the bed (although I realize that this is subjective and I am probably not the only one in Northern Europe when it comes down to my preference).

All Bank Hotel guests receive breakfast from 7AM to 11AM on weekdays and 7AM to 12PM on weekends. Bonnies Restaurant is the hotel's signature all-day dining restaurant. It is a beautiful space.

Breakfast consisted of a buffet and a separate menu that you could supplement (you could order as many as you like). Here's the breakfast menu:

The buffet was comprised of a variety of fresh fruits, juices, and smoothies.

The remainder of the buffet was located in the corner of restaurant and featured cold cuts, cheeses, vegetables, pastries and cereals.

The servers offered coffee, which was delicious.

We tried many of the a-la-carte dishes during our stay, including the chia pudding and scrambled eggs, as well as the croque monsieur and omelet.

I've had some poor breakfast experiences in Northern Europe so this was quite a pleasant surprise. It was a beautiful setting, the service was impeccable, and I enjoyed the freedom to choose from the menu or select items from the buffet.

Le Hibou, a rooftop bar at Bank Hotels, is open in the afternoons as well as evenings. The bar cannot be accessed directly from the hotel, so you will need to walk next door and take an elevator up the stairs.

Le Hibou is super cute and offers both indoor as well as outdoor seating.

We sat outside because there is nothing more beautiful than a sunny afternoon in Stockholm.

A selection of light snacks was available as well as a large cocktail list.

As usual, I ordered a dirty martini because I was being stupid. When done right, dirty martinis can be my favorite cocktail. However, they are terrible outside of the US 90% of the times (based on my personal preferences), even if I explain exactly what I want. But I make the same mistakes over and over again. However, the other drinks were delicious.

The Bank Hotel offers a variety of impressive gym options. One of the best features is the small gym that guests can use. It's not too big for a boutique hotel. There are a variety of weights and cardio equipment.

It gets even better: Bank Hotel guests have unlimited access to the amazing NK Padel & Social Club, which spans 3,000m2 (32,000+ feet). It was very busy so I wasn't able to take pictures.

The service was probably the most impressive thing about Bank Hotel. The staff was exceptional across the board.

Every time we returned to the hotel, our front desk agents would greet us and offer us a popsicle of water or a bottle of water.

The front desk agent made sure we had coffee and checked out by 3AM the morning before we left.

We were not only asked how we enjoyed our stay, but the front desk agent also asked us what improvements could be made. This is a great question that most hotel employees don't dare ask.

Excellent service at the breakfast restaurant. The servers were friendly and attentive and remembered our preferences for coffee and room number.

Although there is a limit to how much interaction you can have with staff in a city hotel, my impression of the service at this hotel was very positive.

We were happy to choose Bank Hotel Stockholm as our hotel. It has well-appointed rooms, excellent food and beverage outlets, friendly staff, and is centrally located. The best part is that the property is owned by Small Luxury Hotels of the World and even a part of the World of Hyatt partnership.

If I had to choose, I would probably go somewhere else next time I visited Stockholm. However, I highly recommend this hotel for those who are looking for a luxury boutique property.

What was your experience at Bank Hotel? Which hotel should I visit next time I'm in Stockholm?
bankroomhyatthiboubreakfastlereviewstockholmworldslhhotelshotel
2.2k Like

Hyatt May Acquire Hotel Group To Grow In Europe