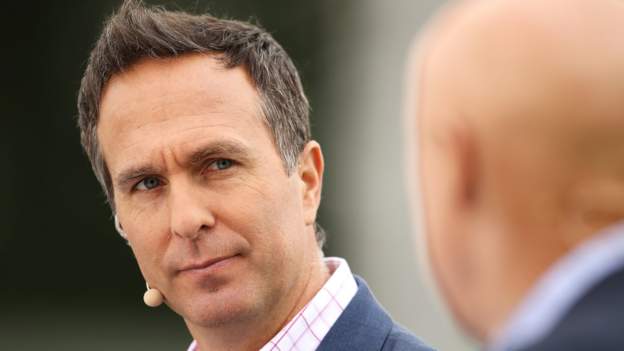 Last update on. From the section Cricket
From 1993 to 2009, Michael Vaughan was a Yorkshire player

After it was claimed that he made a racist comment about a group Asian players, former England captain Michael Vaughan won't appear on BBC Radio 5 Live's Monday show.

Yorkshire's report on Azeem Rafiq’s racism claims during his time at the club named Vaughan.

He "completely, categorically denied" the claims.

A spokesperson for BBC said that the BBC was still in talks with Michael and his team.

Vaughan wrote in the Telegraph that he had told Rafiq, a group of Asian players about the report.

Rana Naved-ul-Hassan (ex-player from Yorkshire) has supported Rafiq's complaint. She said that he had heard the alleged comment.

A spokesperson for the BBC stated that "The BBC takes all allegations of racism very seriously."

"We have decided that Michael will not appear on Monday's 5 Live's Tuffers or Vaughan Show.

"The show is focused on current cricket matters, and because of his involvement, we must ensure that we keep the program impartial."

Vaughan stated that he "totally rejects any allegation about racism".

Rafiq's concerns and subsequent investigations were widely criticized by the club.

Yorkshire began investigating Rafiq's claims of "institutional racism" at his club in 2020. He claimed that he was close to suicide.

Yorkshire has released the results of an independent report on September 7, after more than a year and being asked by MPs. It upheld seven of Rafiq's 43 allegations.

Yorkshire stated that no player, coach, or executive would be disciplined following an internal investigation by the club into the report's findings.

ESPN reported Monday that Rafiq was frequently referred to as a racist because of his Pakistani heritage. However, the investigation found it to be friendly and pleasant banter.

Gary Ballance, an ex-england international footballer, has stated that he was responsible to some of the racist comments directed at Rafiq and said that he "regrets” his actions.

Yorkshire were banned from hosting England matches, and many sponsors have left.

15 December 2020: Rafiq files an action against Yorkshire alleging direct discrimination, harassment and victimization on the basis of race.

2 February 2021: Yorkshire threatens a lifetime ban to anyone who makes threats against Rafiq, his family or legal team. This threat was made after ESPN Cricinfo shows them messages Rafiq sent.

19 August 2021: Yorkshire, which has yet to release the results of the report, admits Rafiq was the victim of inappropriate behavior and offers him "profound apologies."

28 October 2021 Yorkshire: Yorkshire claims that it conducted its own internal investigation following the findings of the report. It concluded that there was no misconduct or action by its employees, players, or executives that would warrant disciplinary action.

ESPN published a story saying that the report concluded that Rafiq had been referred to as "banter" when he used a racially offensive word towards him.

Knight's comments come after Javid, the health secretary, calls for "heads-to-roll" at Yorkshire. He said that if the ECB didn't take action, "it isn’t fit for purpose". In a tweet, Knight stated that Rafiq's term was "not banter"

Nike announces the end of a four-year contract with kit supplier Nike. This was announced in March 2021.

Michael Vaughan, former captain of England, claims he was included in the report, but "totally rejects any allegation about racism".