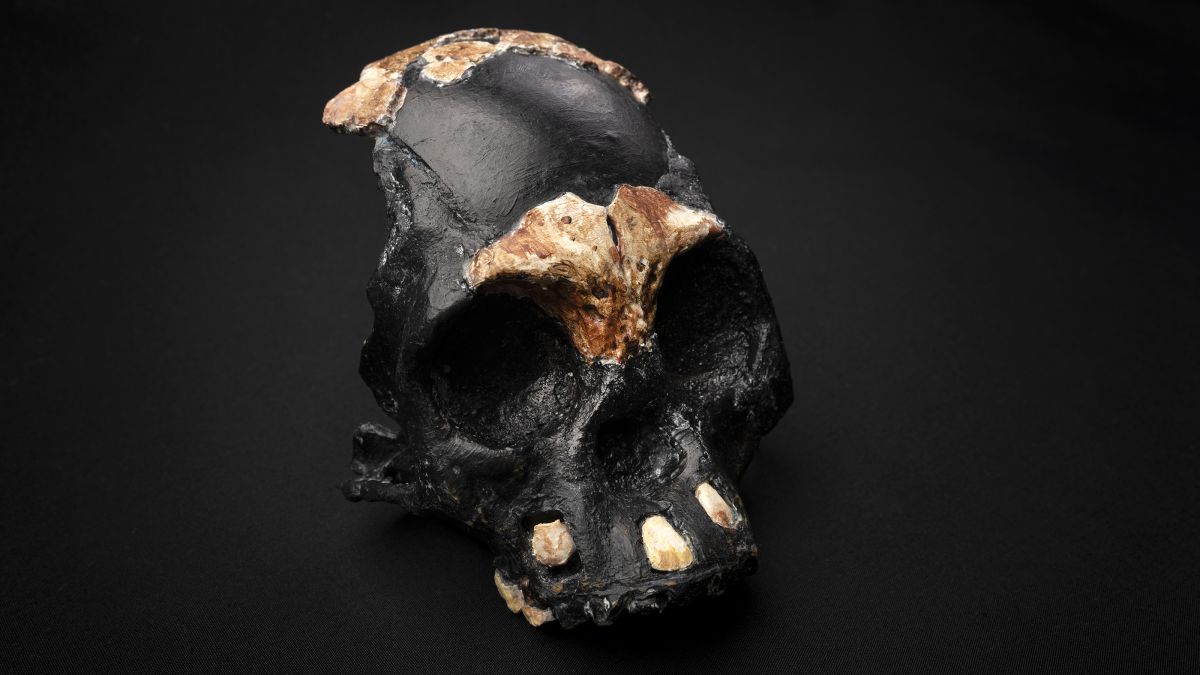 Reconstructed skull of Leti, a young Homo Naledi. This skull was discovered in a small passageway within a South African cave. It is believed to date back more than 241,000 year. Image credit: Wits University
Scientists have found the skull fragment of a Homo Naledi child deep within South Africa's Rising Star Cave System. It is located in a narrow passageway measuring just 6 inches (15 cm) wide. It is not clear how the skull got into such a remote cave, but the researchers suspect that it may be evidence of intentional burial.

Based on the ages and remains in the mysterious cave, "Leti", short for "Letimela" or "Lost One," is most likely to have lived between 335,000-241,000 years ago. Since 2013, fossil fragments belonging to approximately 24 Homo naledi people have been discovered in the cave system. They were found in what is now called the Dinaledi Chamber.

It is a mystery why so many people from one species are found in the cave. The only entrance is through a vertical fracture measuring 39 feet (12 meters), known as "The Chute". Geologists and spelunkers are yet to find evidence of other passageways. Leti's small skull, which was about 2.6 feet (80cm) above the cave floor, was found in fragments on a limestone shelf. Maropeng Ramalepa of the exploration team stated that the spot is located in "a spiderweb filled with cramped passages".

Image 1 of 4 Leti’s skull fits in the palm of a modern hand. (Image credit Wits University. Image 2 of 4 Researchers exploring the cave had only 6 inches (15 cm) of space to explore the passageways where Leti was discovered. Image 3 of 4 Teeth taken from the Homo Naledi child "Leti" Leti's teeth suggest that she died at the time of eruption of the first permanent, or permanent molars. This would have been between 4 and 6 years in modern human history. (Image credit: Wits University. Image 4 of 4. The reconstructed skull "Leti", a young Homo Naledi. This skull was discovered in a small passageway in a South African cave. It is believed to date back more than 241,000 year. Image credit: Wits University

An ancestor with complex ancestry

According to a paper published in PaleoAnthropology on Thursday, Nov. 4, the area is difficult to navigate for experienced spelunkers using modern equipment. The bones of H. naledi have not been found in the cave. There are also no signs of predation or gnaw marks. They also seem to have been found in the cave and not mixed with sediment or any other debris.

This leaves the possibility open that over 240,000 years ago, orange-sized brains of human ancestors entered a maze-like cave and placed their dead in it.

The fossils from the Rising Star cave system have no tools or artifacts. Other than two juvenile baboons and one Homo naledi specimen, there are no signs that other animals have entered the caves.

John Hawks, an Anthropologist at the University of Wisconsin-Madison, who studies the remains, said that this human ancestor lived in the same time period as Homo sapiens. Hawks stated that their apparent explorations of the cave suggests that they were among modern human ancestors and had learned how to use fire to light their explorations. According to Smithsonian National Museum of Natural History H. naledi walked straight, measured approximately 4 feet 9 inches (1.44 m), and weighed between 88 & 123 pounds (roughly 40 & 56 kilograms).

The new skull, which can fit into the palm of a modern hand, should provide more information about H. naledi’s growth and development. Although a few fragments of jaws from juveniles were found in the cave's cave, this is the first discovery of bones from the skull case or cranium by researchers. Six teeth were also found.

During an exploration of narrow passageways around Dinaledi Chamber, the bones and teeth were discovered. Researchers explored 1,037 feet (316 m) of these passageways in search of evidence of another route into the chamber. They did not find any evidence for another route.

Marina Elliott, an archaeologist at Simon Fraser University in British Columbia, Canada wrote in the PaleoAnthropology paper: "Exploring the narrow passages of the Dinaledi Subsystem requires considerable effort, navigating areas that have irregular floors and walls and numerous obstructions, fissures smaller than 30 cm [11.8 in] wide,"

However, the researchers found more fossils within this subterranean maze. They included the second-ever piece that provided evidence of a juvenile baboon living in the cave; a single-arm bone thought to belong to H. naledi; a trove containing 33 bone fragments which also most likely belonged to an H. naledi person or group; and Leti. The journal PaleoAnthropology also published details on Leti's skull on Nov. 4.

The skull, which was partially preserved, was split into 28 pieces. These fragments revealed the forehead of the child and the top of his head when reconstructed. There were four permanent teeth that had not been worn and two baby teeth that were worn. The child's development and wear suggest that they were at an age when the first permanent molars began to break through the gum. This would be approximately 4 to 6 years for a human child. H. naledi's development rate is unknown. Leti could have died earlier than Leti if he or she had been born faster.

Leti's skull is large enough to indicate that her brain was approximately 90% to 95% larger than the average brain volume for adults of her species. It measured between 29 and 37 cubic inches (480 & 610 cubic cm).

Juliet Brophy from Louisiana State University, an anthropologist, stated in the statement that "[T]his begins give us insight into every stage of life of this remarkable specie."