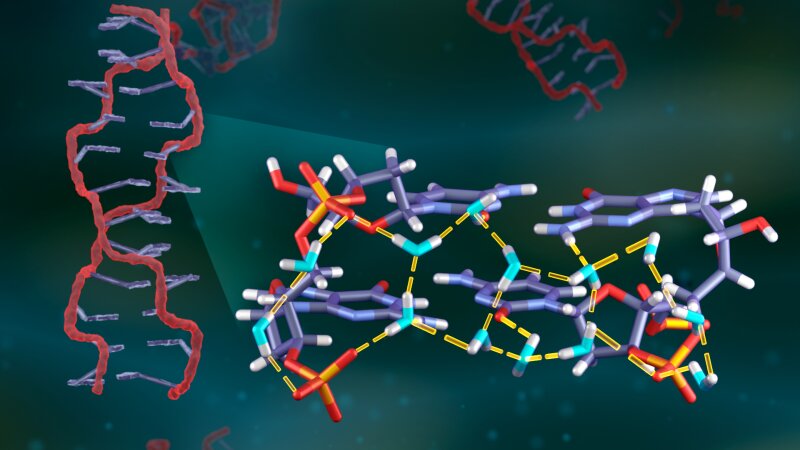 Researchers at Vanderbilt University used neutrons from ORNL to discover hydrogen bonding patterns between water molecules and DNA (shown in the blue). These findings could provide insight into the role of water in DNA function. Credit: ORNL/Jill Hemman
Water has many important functions in the human body. It can even affect the DNA of our cells. Water molecules cover the entire surface of a DNA double-helix. The water sheath attaches to the DNA material via hydrogen bonds. These are formed by sharing hydrogen atoms among molecules. Water can alter the way DNA interacts with other molecules and takes shape through hydrogen bonds. Water can sometimes help proteins recognize DNA sequences in certain cases.

Although scientists can determine where hydrogen bonds are formed and how they are shared, it is hard to collect experimental evidence. Vanderbilt University's research team has created a method that captures the most complete view of water's hydrogen bonding patterns surrounding DNA. This opens up new opportunities for studying how water affects DNA function. The journal Nucleic Acids Research has published details about the method and the results. These were largely obtained through neutron scattering at Oak Ridge National Laboratory (ORNL) of the Department of Energy.

Water acts as a mediator between DNA molecules and other molecules. This is true even for specific interactions. Martin Egli, a Vanderbilt University biochemistry professor and the corresponding author of this study, stated that before any molecule can attach to a DNA segment, it must first pass through this water shell." "In order to improve our understanding of DNA processes it is important to understand exactly how the water around us arranges itself around molecules.

Although X-ray Diffraction experiments have revealed the location of water molecules around DNA, the hydrogen bonding patterns between these molecules remain a mystery. Researchers can use neutrons to identify where hydrogen bonds are formed and which molecules they come from.

"X-rays show that the typical electron density for a water molecule is a sphere. It's similar to a soccer ball. Leighton Coates, an ORNL scientist who was involved in this research, said that it is impossible to see hydrogen atoms so the molecule doesn't have any directionality. "Water molecules with neutrons look more like boomerangs. It is possible to see the orientation of hydrogens and to determine hydrogen bonding patterns.

The team used a crystalized fragment of a well-studied DNA segment with six base pairs. They alternated between cytosine (or guanine) to conduct their research. This fragment, known as d(CGCGCGCG), was the first to have its crystal structure established in 1979. The scientists used a deuterium oxide solution to replace many hydrogen atoms within the fragment. The neutrons see deuterium differently than hydrogen. This allows researchers to selectively collect information about the DNA and water structures.

Egli stated that by lowering the water mobility of our sample, water molecules can be kept in a lattice-like arrangement. This allows us to lock down their location and position. "If we collected these data at room temperature, many water molecules' positions would be scattered over different locations in space.

Joel Harp, research assistant professor at Vanderbilt University, and co-author of the study, said that neutrons could be used to distinguish water molecules based on their number of hydrogen bonds.

To determine the location of the water molecules' oxygen atoms around the DNA fragment, X-ray diffraction experiments on a similar crystal were conducted at the Vanderbilt University Center for Structural Biology.

Combining these complementary methods, the researchers were able to achieve the most comprehensive analysis of water molecule orientations surrounding a DNA double-helix. The orientations of 64 water molecules were captured either directly in contact with the DNA fragment, or near it. This study showed how hydrogen bonds can be donated or accepted by water molecules in prominent areas of the DNA structure. Unexpected hydrogen bonds were found, which was contrary to previous assumptions. This method may be used to verify molecular dynamics models of DNA water networks.

This method is being used by the research team to examine how water interacts with other macromolecules such as RNA.

Egli stated, "Now, I believe that it's time for us to apply the lessons we have learned in more difficult projects." Water is such an essential element of life. There are many more things that can be done.

For The First Time, Physicists Observed a Quantum Property That Makes Water Weird

In a first, scientists capture a 'quantum tug' between neighboring water molecules

‘Hycean’: a portmanteau of hydrogen and ocean that’s not so far, far away

New material can generate hydrogen from salt and polluted water