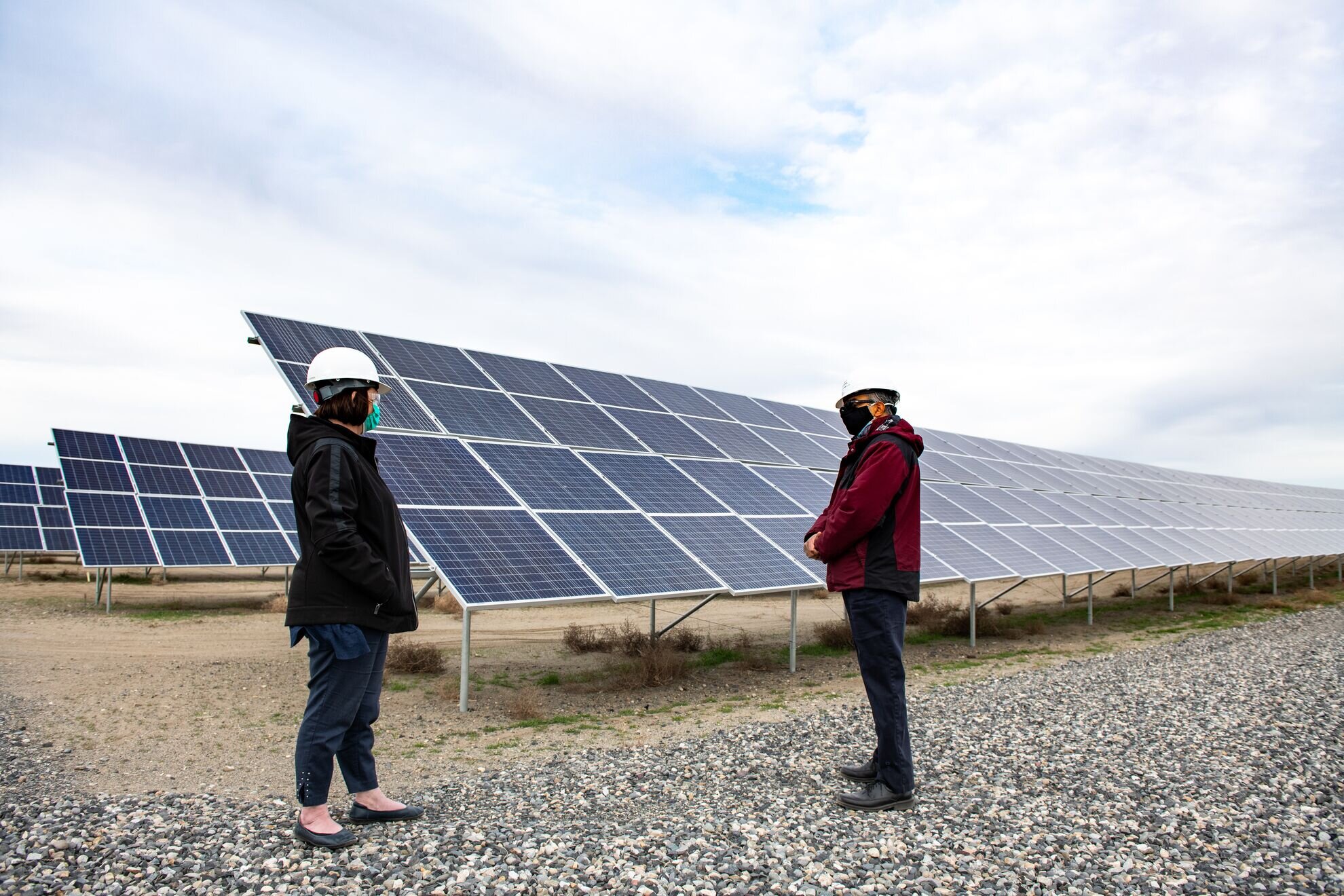 A new study published in Science credits the lower cost of solar panels, electric cars and other forms of renewable energy for reducing the risk of global temperatures rising to 4 degrees Celsius. The Horn Rapids Solar, Storage and Training Project, Richland, Washington, is the first state-of-the-art opportunity to include a utility scale solar and storage facility in its clean mix of wind, hydro, and nuclear resources. Credit: Andrea Starr/Pacific Northwest National Laboratory
More than 100 countries have made new commitments to reduce greenhouse gases emissions in advance of the United Nations Conference of the Parties (COP26) currently taking place in Glasgow, Scotland.

Science published a new analysis today that evaluated these pledges or nationally determined commitments (NDCs) and their potential impact on Earth's climate. According to the study's authors, the NDCs are now more likely to limit global warming below 2 degrees Celsius (3.6 degrees Fahrenheit).

According to the 2015 Paris Agreement, 8 percent and 0 percent of the chance of limiting temperature rise to below 2 and 1.5 degrees Celsius (2.7 and Fahrenheit, respectively) by 2100 was possible, according to the pledges.

The study's authors believe that if the pledges are fulfilled and strengthened with policies and measures of equal, or greater ambition, those chances will rise to 34 percent and 1.5 percent respectively. These probabilities rise to 60% and 11% respectively if countries pursue a more ambitious course beyond 2030.

The chance of global temperatures increasing above 4 degrees Celsius (7.2 Fahrenheit) is virtually eliminated. The 2015 pledges made it more likely that such warming would occur at 10%.

Haewon McJeon (a researcher at the Department of Energy’s Pacific Northwest National Laboratory) said that "We are so closer to reaching the 2-degree goal" than they were six years ago, when the Paris Agreement was signed. "The increase in climate pledges strengthened and net-zero targets greatly increased our chances of keeping below 2 degrees Celsius. We practically eliminated the possibility of worse climate outcomes, such as 4 degrees Celsius or more.

Ou stated that there is a one in three chance of us staying below 2 degrees Celsius. "But even with our increased ambition, we are still far from getting to 1.5 degrees Celsius in this century."

To simulate various scenarios of emission, the researchers used the Global Change Analysis Model (GCAM), an open-source model. The researchers then evaluated the probabilistic temperatures for these scenarios.

The one-end of the spectrum shows a hypothetical future where current climate mitigation policies and measures will remain relatively unchanged through 2100. On the other end, countries commit to achieving higher targets in reducing emissions and increasing global decarbonization. This modeling shows the wide range of climate outcomes possible despite different actions.

The authors stated that several factors have influenced near-term emission trajectories as well as long-term climate outcomes. The authors cite the global shift away from coal and technological advancements that made electric cars and solar panels more affordable. They said that these developments have contributed to the realization of the Paris Agreement's goals.

Even if no new emission mitigation strategies are implemented through 2100, the projected emissions for this century will be lower than previously estimated. This is largely due to post 2015 developments such as reduced investment in coal power and reduced costs of renewable energy.

Gokul Iyer, co-lead author, and PNNL researcher, stated that "new commitments, technological advancements, and the near and long-term recovery form the pandemic" have put us on a new course than the 2015 Paris Agreement. We can still stay below 2 degrees Celsius if we set higher goals that reflect the shared but different responsibilities of all parties.

Iyer said, "And this highlights how important the Glasgow meeting is." "Without regular and transparent updates, it's impossible to get strong commitments sufficient to reach the temperature goal."

McJeon said, "This was an all out team effort among scientists and policy experts who have extensive knowledge of current international discussions on climate policies." "We brought together policy analysts from each country to track their climate commitments and modelers who simulate the climate response to increased greenhouse gas emissions. This really shows how important collaboration science is."