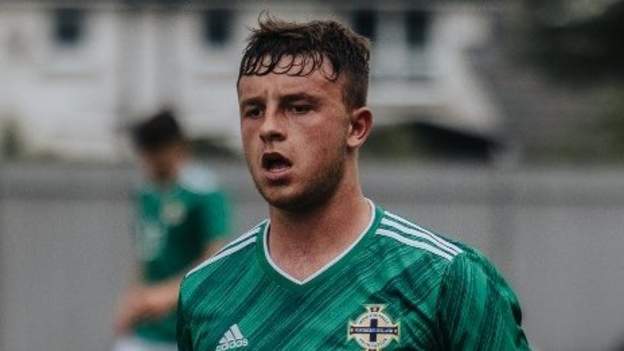 Dale Taylor, a Nottingham Forest striker aged seventeen years old, has been called up to the Northern Ireland senior squad.

Ian Baraclough, the manager of Linfield High School, has included the former Linfield teenager in next week's World Cup qualifying matches against Lithuania and Italy.

Jonny Evans will be returning to Windsor Park for the games on 12 and 15 Nov.

Southwood was born in Oxford and is currently a 23-year-old England Under-19 and under-20 international. He qualified through his Northern Ireland-born grandmother.

Since he was eight years of age, he has been with Reading. He returned to Reading last season after a spell in Scotland with Hamilton Academical. He is now the Championship side's number one keeper.

Luke Southwood, Reading goalkeeper, has been called up to the NI for his first call-up.

Hearts forward Liam Boyce, who was absent from the previous two international camps due to family reasons, has asked again not to be included.

Ethan Galbraith, a Manchester United youth player, returns to the senior panel after impressing for Doncaster Rovers in August. Galbraith is the NI U21s captain of late.

Baraclough's men sit fourth in the five-team team group. They have collected five points from six matches but are now out of contention for qualification.

Taylor impresses for his club

He has been a star for Forest's Under 23s since his ankle injury. He was a scorer for Northern Ireland's Under-21s against Scotland and has been captain of his country at the Under-19 level.

Taylor, who was just 15 years old, made his Linfield senior debut against Cliftonville in County Antrim Shield. He also made a few first-team appearances prior to moving to the City Ground.

As a 15-year old, Dale Taylor won the County Antrim Shield for Linfield.

"I brought Luke and Dale into the squad to see their reactions. Baraclough explained that it was a chance to get them into the squad and interact with the group, and see how they train, integrate, and conduct themselves."

Evans was injured and missed all of the games in the October and September international windows. Corry, his brother, also returned after having to leave the squad for games against Switzerland/Bulgaria.

After missing the October double-header due to injury, Ali McCann, a Preston midfielder is back in the panel.

Hearts' Michael Smith will not be part of the 25-strong squad due to injury. Also missing this time are Trevor Carson from Dundee United, Leyton Orient's Paul Smyth and Dion Charles, Accrington Stanley's forward, Sunderland's Carl Winchester, Liverpool's goalkeeper Liam Hughes. Hughes is expected to play for the Under-21s.