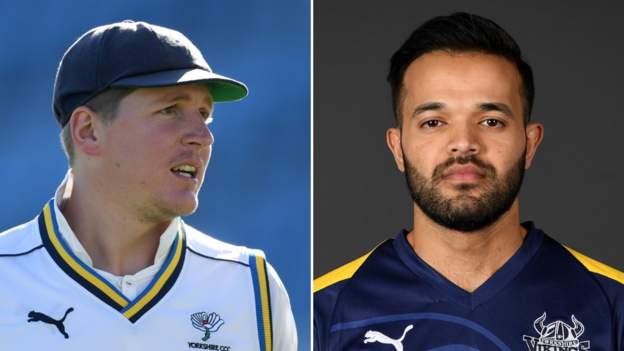 Ballance, who moved to Yorkshire in 2008, was a player with Rafiq during his two spells at Yorkshire
Gary Ballance, an ex-England international, has admitted that he regrets using a racial slur to refer to his former Yorkshire teammate Azeem Rasiq.

Ballance made a long and emotional statement claiming that he was responsible to some of the offensive terms Rafiq was exposed to while he was at Headingley.

Ballance, 31, stated that it was reported that she used a racial insult. She said that she accepted the responsibility and regretted doing so.

"To be clear, I regret some of my language choices in my younger years."

Ballance, who was a 23-match Test match player for England, stated that Rafiq was his "best friend in cricket" and that they "care deeply for each other".

Ballance added, "I don't want to discredit Rafa with the words and statements he made about others, but I must be clear that it was a situation in which best friends said offensive comments to one another that, outside of that context would be considered totally inappropriate."

"I regret these exchanges, but at no point did I believe or comprehend that Rafa was in distress.

"If I believed that, then I would have stopped right away. He was my best friend in cricket, and I loved him deeply. Rafa has never been accused of being reduced to tears, according to my knowledge.

Zimbabwean-born Ballance claimed that he and Rafiq were "close friends" during the time they exchanged inappropriate comments with their team-mate, who was travelling to Zimbabwe to visit Ballance's family. Ballance claimed he was invited to Rafiq’s wedding in Pakistan but couldn’t attend.

He said, "That doesn't mean that what was passed between us was correct or appropriate." It wasn't. Rafa made comments to me that were unacceptable, and I repeated the same thing with Rafa. Rafa was not offended or I said anything maliciously."

ESPN Cricinfo published a September 2020 interview with Rafiq, in which he claimed that he was close to suicide due to institutional racism at Yorkshire County Cricket Club. This prompted the club's investigation.

Yorkshire published the September report in which Rafiq was deemed the victim of racial harassment, bullying, with seven of the 43 allegations being upheld by an independent panel.

Yorkshire stated that it had conducted its own investigation into the findings of the report in October and concluded that there was no misconduct by its employees, executives, or players that would warrant disciplinary action.

Julian Knight MP, the chair of the Digital, Culture, Media and Sport Select Committee, called for the resignation of the board of Yorkshire County Cricket Club after a leaked report, which apparently contained details about the investigation into Rafiq's treatment, was published earlier this week.

"I am conscious of the hurtful nature of the racial insult."

Ballance stated that he felt obliged to respond publicly to media reports, which he said give a misleading impression of the evidence heard during the investigation.

He said, "I am conscious of how hurtful this racial insult is and I regret using it in immature conversations in my younger years. I'm sure Rafa feels exactly the same about some things he said me."

"My intention throughout this entire process was to be honest with and cooperate with the independent investigation.

"In light recent media reports, it is only fair, on behalf me and my family that I place my position in public domain."

2 September 2020: ESPN Cricinfo publishes an interview featuring Rafiq, in which he asserts that he was subject to institutional racism at Yorkshire County Cricket Club.

2 February 2021: Yorkshire threatens a lifetime ban to anyone who makes threats against Rafiq, his family or legal team. This threat was made after ESPN Cricinfo shows them messages addressed to Rafiq's law firm.

19 August 2021: Yorkshire, which has yet to release the results of the report, admits Rafiq was the victim of inappropriate behavior and offers him "profound apologies."

10 September 2021: Yorkshire releases the findings of the report. It states that Rafiq was "victim of racism harassment and bullying". Seven of the 43 allegations made against Rafiq were confirmed by an independent panel.

Yorkshire released a summary and recommendations of the panel's report, but stated that the full report was not available due to legal issues "regarding privacy law and defamation".

Julian Knight MP, the chair of the DCMS Select Committee, has called on the board at Yorkshire County Cricket Club, to resign following a leak of a report that apparently contains details about the investigation into Rafiq's treatment.

Knight's comments come after Sajid Javid, UK Health Secretary, calls for "heads-to-roll" at Yorkshire. He said that if the ECB didn't take action, "it's no longer fit for purpose." In a tweet, Knight stated that Rafiq's term was "not banter"

Ballance issues a long statement in which he regrets using a racial slur to refer to Rafiq, his former Yorkshire team-mate.
ballanceindependentracialazeemslurreportinvestigationclubracism2021yorkshirerafiqcricketgaryregretsusing
2.2k Like