Christian Archaeologists Wanted to Excavate the Biblical Past. They Ended Up Sparking Today's Strife in Jerusalem 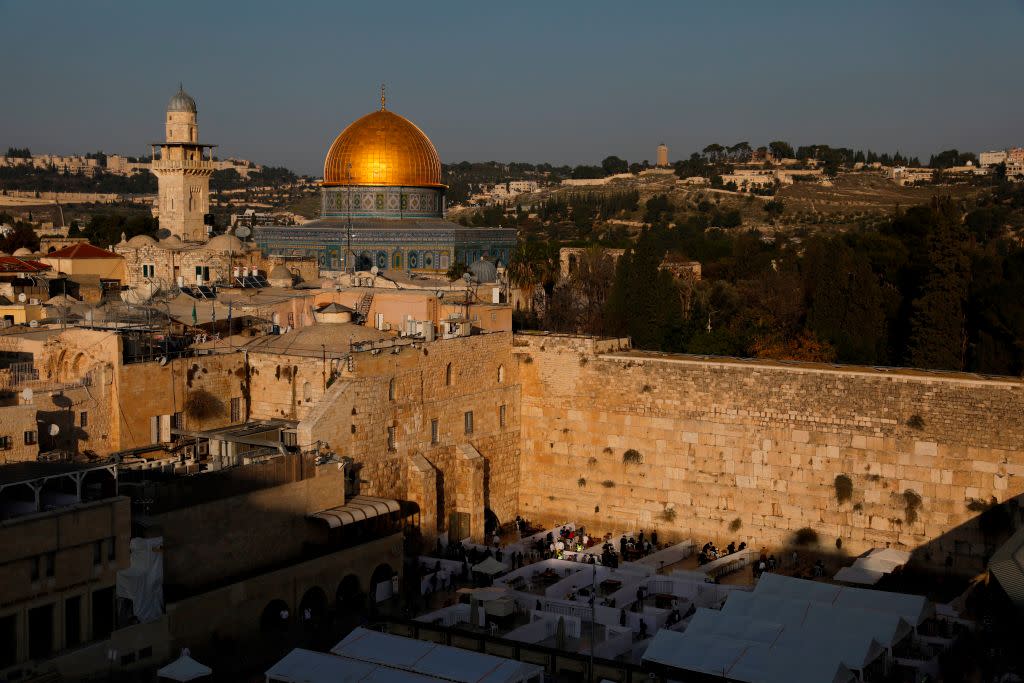 PALESTINIAN-ISRAEL-JERUSALEM-HOLY SITES
A general view of Jerusalem's Western Wall, and the Dome of the Rock at Dec. 3, 2020. Credit – Ahmad Gharabli/AFP/Getty Images

A court in Israel ruled that Jews can pray on Jerusalem's Temple Mount if they do so quietly. This unexpected decision was sure to cause more unrest in a city already suffering some of the worst violence in recent years. Turkey and Egypt condemned the decision, which was hailed by devout Jews as a victory in religious freedom. The long-standing ban on prayer was quickly reinstated by a judge, narrowly avoiding an international crisis.

On Yom Kippur, a Jewish man began praying on the 37-acre city's ancient acropolis, which Muslims call Haram al-Sharif. The Israeli police who are responsible for security at Islam's third holiest site ordered him to stop. It might seem odd for Israeli police to prevent Jews praying at a sacred place Judaism holds sacred. Their decision to expel the man may appear a violation of a fundamental human right. This prohibition and the religious complex that lies at the core of the Israeli-Palestinian conflict must be understood.

Many people don't realize that strife in this country is not caused by Jews or Muslims. It is due to the actions of zealous European Christians who are eager to uncover the biblical past. In the middle of the 19th century, Western explorers began to descend on Jerusalem, which was then part of the Ottoman Empire. They sought to discover the tomb of David, Solomon's treasures, and the real site of Jesus' crucifixion.

In 1863, a French senator found a sarcophagus containing bones he claimed to be the remains of an ancient Judean queen. This move angered the Jewish community. A Hebrew-language newspaper reported that even Muslims were upset by this wickedness. The Ottoman governor granted permission for the stone casket and human remains to be shipped to the Louvre.

In 1864, British Protestants launched their own campaign for the recovery of biblical artifacts. Charles Warren, a British army officer, used gunpowder in order to blast through the underground tunnels and caves that make up Jerusalem's subterranean world. Many of his activities were located near the Noble Sanctuary. Some suspect that the British may have had a plan to tear down the walls that support the 1400-year-old Dome of the Rock, and al-Aqsa Mosque.

Continue reading: The rapid rise of a Palestinian uprising against Israeli forced evictions has led to full-scale war

As the Ottoman Empire was beginning to crumble, European explorers fought to locate remnants from the biblical period below. Their nations fought for control of the city above. However, their ultimate Holy Grail remained strictly out of reach. Christian excavators wanted to find the remains of the last Jewish temple that was destroyed by the Romans in 70 C.E. (common era). Even Kaiser Wilhelm II was rejected when he made a personal appeal to the Muslim mufti during a 1898 visit.

Ten years later, an English aristocrat led what might have been the most bizarre archaeological expedition in history. A group that included a French monk, a Swiss psychic and a Finnish poet joined him on the quest for the Ark of the Covenant. They believed that the Noble Sanctuary contained the gilded box mentioned in the Bible. The effort was funded by American industrialists, British nobles, and senior Ottoman officials who were promised a cut of the sale of the treasure. The leader of the team, who failed to find anything of value, used bribery to dig the Dome of the Rock at night.

The Dome of the Rock circa 1911. Photo12/Universal Images Group via Getty Images

They discovered the rock as they worked away, long regarded as the spot where Muhammad embarked on a night-long journey. The Europeans fled. Protests spread throughout the Islamic world, and riots erupted. Louis Fishman, a Brooklyn College historian, said that the incident showed Muslims revered the sanctuary as far as India. He also said that it made clear that the sanctuary was viewed as sacred by Palestinians, who felt a special responsibility to protect it.

The Noble Sanctuary transformed from a place for worship to a symbol of Palestinian pride, just as Jewish refugees fleeing European pogroms made the Wailing Wall a focal point of nationalist aspirations and religious longing.

After the British invaded Jerusalem in 1917 and displaced the Ottomans there, a French archeologist enjoyed digging into the old paving, making galleries and trenches at the acropolis to find bits of the ancient Jewish temple. The British politicians were mindful of the many Muslims living in their empire, especially Egypt. They forbade Jewish and Christian worship at the site. Mark Sykes, British diplomat, warned that any such intrusion would ignite a firestorm which could burn half of the continent.

Little has changed in the past century. The 1967 Six Day War saw Israel capture the Old City from Jordan. Moshe Dayan, the Israeli Defense Minister, granted Muslim clerics religious authority while under the surveillance of Israeli security. He concluded, like Sykes that unilateral control could lead to a much more destructive conflict.

Continue reading: The Battle for Jerusalem

All Israeli governments have maintained this position since then, but threats to the integrity of the site's integrity have not abated. 40 years ago, a Rabbi entered beneath the site in his quest for the Ark. Several subsequent Jewish extremist attempts to destroy the Dome of the Rock were unsuccessful. Twenty-five years ago, violence broke out when a new tunnel was opened that extended the length of the Western Wall below the Muslim Quarter. It left about 100 people dead and many others injured.

In the end, the dispute over the ownership of the acropolis and what lies below and around it led to the collapse of peace negotiations and the beginning of the Palestinian Intifada (or uprising) in the early 2000s. Fundamentalist Christians, Jews, and some Israeli government officials have become more vocal in their calls for a Jewish temple on the acropolis. However, police have taken a softer line against Jews who visit the Muslim compound to pray and go as tourists. It is no surprise that al-Aqsa is under threat. This powerful rallying cry is for Palestinians as well as Muslims all over the globe.

Talk of religious freedom today ignores the reality. The belief that Muslims were under siege by Western Christians instilled fear in Muslims. Sharing is the only option, unless you use brute force. The plea made by Omer Barlev, Israel's police minister, to the court last month can be heard echoing Dayan and Sykes: Any change in the status quo could endanger public safety and cause a flare up, he warned. This is a fact that has been proven true by a century of bitter experience. Although the court accepted this fact and reiterated the ban on prayer, the debate will continue.

There is no way to untie the ultimate geopolitical knot unless members of Jerusalem's diverse faiths, including Christians, accept and respect each other's existing prayer spaces. This monumental task should be left to braver generations. The status quo, imperfect and inept, is all that exists between fragile peace and more blood on the streets of the Holy City.

Andrew Lawler, an American journalist and author. Doubleday has his latest book, Under Jerusalem, The Buried History Of The World's Most Contested City.
beneathdomepastjewishstrifejewssanctuaryreligiouswantedprayerchristiantodaysendedbiblicalmuslimssparkingjerusalemexcavateisraelibritish
2.2k Like