Winnipeg Jets' Kevin Cheveldayoff addresses time with Chicago Blackhawks, limits to what he said he knew about Kyle Beach 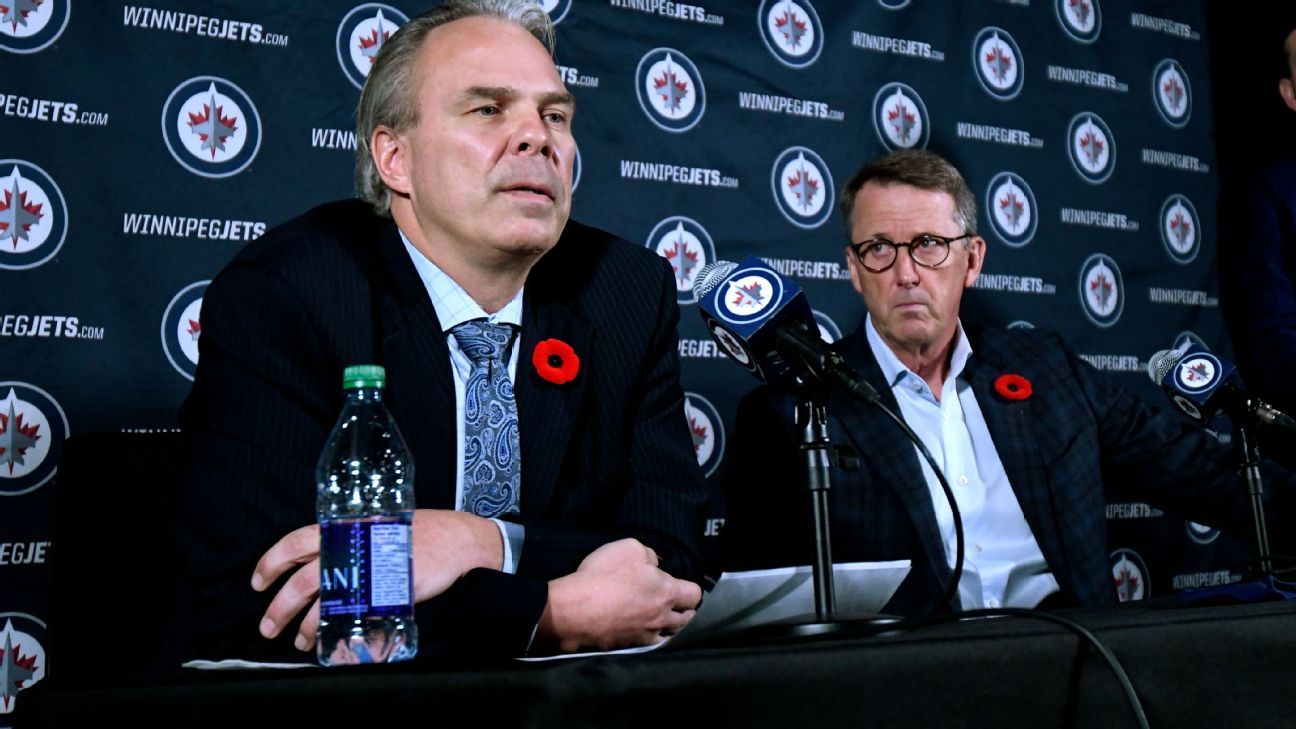 Kevin Cheveldayoff, Winnipeg Jets general manger, stated Tuesday that he wasn't made aware of allegations of sexual assault by Kyle Beach against Brad Aldrich, former Chicago Blackhawks video coach.
After Beach approached the club regarding what he claimed were impropriety on the part of Aldrich, Cheveldayoff admitted that he was present in the room with Jets owner Mark Chipman during a news conference.

Cheveldayoff claims that he didn't know the full extent of Beach's allegations at first.

Cheveldayoff stated that he was asked to enter a meeting that was in progress. "I was asked if there were any allegations against Brad Aldrich or any other players. I said that I hadn't. I was not involved in the meeting that followed.

Cheveldayoff stated that he was told that there were "allegations of inappropriate texts and unwelcome advances [between Aldrich & Beach]" and that they were possibly socializing away at the rink. This is something that shouldn't have been happening. It shocked me but it was only what I knew.

"What I heard was unacceptable, but it was something that I could not accept. It was harassment-related allegations. My understanding was that this was going to be investigated. If I had known there was any sexual assault, I would have liked to believe it would have escalated to a higher level.

Beach, who filed under the alias of "John Doe", brought two lawsuits against Blackhawks in May for mishandling his allegations against Aldrich. Chicago ordered Jenner & Block LLP to conduct an independent investigation. The results were made public last Wednesday.

Jenner & Block claimed that all participants in the May 23 meeting "remembered being informed about an incident between John Doe and Aldrich involving an unwelcome sex advance", but that "none" of them remembered being told about the clearly non-consensual sexual conduct John Doe described in his lawsuit or during John Doe’s interview with us.

Cheveldayoff stated that there was a meeting with Paul Vincent, as well as several executives from the May 23rd meeting who were named there. People started to ask if I was involved in that meeting. I said no. It is clear that the alleged meeting took place before [the other] meeting. That did take place on [May 23]. There was clearly litigation involved. I was not in a position of introducing new facts regarding a meeting I was aware of. There's nothing incorrect or false in the [previous] statement. I have never met Paul Vincent about this matter.

On Tuesday, the Jets general manager Kevin Cheveldayoff pledged to make the league more inclusive so that situations such as Kyle Beach's do not happen again. Fred Greenslade/The Canadian Press via AP

After reading the Jenner & Block Report and watching Beach's interview on Wednesday with TSN, Cheveldayoff admitted that he felt remorseful for not acting differently in light of what he knew.

Cheveldayoff stated that Kyle was failing a system meant to help him. "But it didn't, and I'm sorry my assumptions about that system weren't good enough."

Cheveldayoff is the only NHL executive still employed at the May 23 meeting. Bowman resigned from his position as GM of Blackhawks, and MacIsaac was also fired. Gary Bettman, NHL commissioner, met with Quenneville to discuss his role in the incident. Quenneville was then fired as Florida Panthers coach.

Cheveldayoff met with Bettman in New York Friday. However, the commissioner felt that the evidence suggesting his involvement in the scandal was too insignificant to merit any punishment.

Bettman stated Monday that "Because he had limited authority and circumstances, he left [the meeting] on May 23 believing that this matter would be investigated by his bosses. When Aldrich parted ways from the team, he believed that that was what had occurred."

Bettman later pressed Cheveldayoff on whether he should be held responsible. He cited Cheveldayoff as the one who made it clear that he was present at the meeting.

Chipman sat beside Cheveldayoff at Tuesday's news conference, and shared similar opinions about his GM. Chipman became emotional, sharing his personal experience with sexual assault and the impact it has had on him and others. He believed that Cheveldayoff would have done right by Beach if he had more information.

"He didn’t know about the damage done to Kyle." Chipman stated that he couldn't have known. Chipman said that if he knew, Kevin Cheveldayoff, a friend of mine would have acted to ensure Kyle got incredible amounts of suppor... Kyle's privacy would be protected and the perpetrator would not have been in a position to cause harm to anyone.

Cheveldayoff pledged to make the league more inclusive so that situations such as Beach's don’t happen again.

Cheveldayoff stated that "I believe everyone is paying prices on different levels." "I feel fortunate to have the opportunity to make a difference in the game and help others grow and learn.

Cheveldayoff stated that he had spoken to Sheldon Kennedy, a survivor of sexual abuse, about what could be done to make the sport safer. Graham Jones, a junior hockey coach, assaulted Kennedy for five years when he was a teenager. Kennedy has been an advocate for survivors since then.

Cheveldayoff stated that he had spoken with Sheldon and committed to starting his online training. He would then have follow-up conversations with me to determine the level at which he can help our company. "I was speaking to my staff and brainstorming what we could do. We can encourage [Kennedy] even to be a guest coach for one day... and help [players] believe it's OK to have something happen away from the rink or my life? If I know someone who is hurting, [I] can] say, 'I understand.

Cheveldayoff met with Bettman in New York and encouraged them to read the Jenner & Block Report as well as Beach's interview on TSN.

Cheveldayoff stated that he had said that he wanted an inclusive organization in all aspects. I wanted an organization where everyone could feel welcome and included, regardless of race, sexual orientation, or beliefs. It doesn't matter if it's harassment or bullying, or if it's that someone is a manager, coach, trainer, or other associate, you need to feel safe.
knew23jetskylekevinsexualjohnmeetingbeachwinnipegblackhawkscoachallegationscheveldayoffchicagolimitsaldrich
2.2k Like