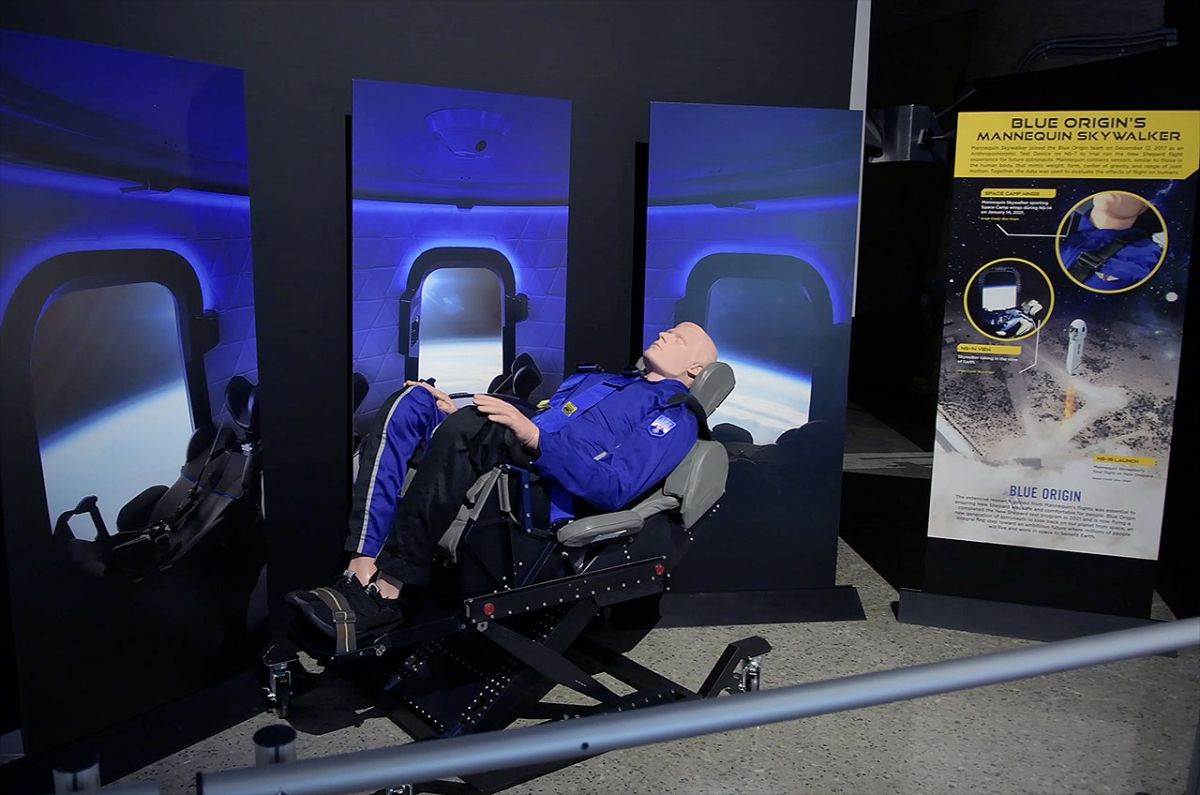 Blue Origin's Mannequin Skywalker anthropometric testing device was successfully launched into space by three New Shepard suborbital flight. It is now on display at the U.S. Space & Rocket Center, Alabama.
Blue Origin's first space passenger, not only on one but several flights, has retired to U.S. Space Camp.

In a video interview, Kevin Sprogue, CrewMember 7 chief astronaut trainer at Blue Origin stated that the devices were used in the test campaign to measure stresses on the body, test our seat design, and to validate our modeling and simulation.

Blue Origin will allow the Mannequin to fly once more as it continues to improve its passenger seat design.

The rocket center's exhibit was unveiled in front of a crowd that included students from the Boys & Girls Club of Ardmore, Alabama. It displays the ATD and its flown chair against a black background and three photos that were arranged to create the appearance of the New Shepard crew compartment during a suborbital flight. On the one-side, a descriptive panel provides information about the dummy and its history as well as Blue Origin.

Sprogue stated that Sprogue was wearing a weight vest to test for a heavier weight astronaut.

The Mannequin skywalker, on display, has been launched into space three times. Its first flight was the seventh flight by New Shepard (NS-7), in 2017. It was awarded NS-14, a pair Space Camp wings in January 2017. The ATD flew its last flight on NS-15 in April.

"He went above the internationally-recognized definition of space, which is 100 kilometers or 62 miles or about 326,000 feet. Mannequin reached 351,000 feet with his New Shepard flight, and was awarded the title of non-human astronaut," Sprogue informed the Boys & Girls Club members.

Blue Origin's first human crew was launched on the next flight (NS-16), following the retirement of Mannequin Skywalker. Since then, the company has flown a second crew including William Shatner (Star Trek) actor. A third passenger flight is scheduled for December.

In addition to the Mannequin Skywalker exhibition, a donation of $1 million to Space Camp by Club for the Future (a non-profit organization established by Blue Origin) is also made.

Josef Reinke (director of Club for the Future) said, "Club for the Future" is proud to be a partner with Space Camp and the U.S. Space & Rocket Center. It is a world-leading authority not only in space but also in education. There are thousands upon thousands of children who dream of Space Camp. But the best part is that those who come to Space Camp have meaningful lives and pursue interesting careers.

Reinke stated that students should come to work for us and work with aerospace companies around the world to pick up where they left off. We need children to be able to read the past and then invent the future.