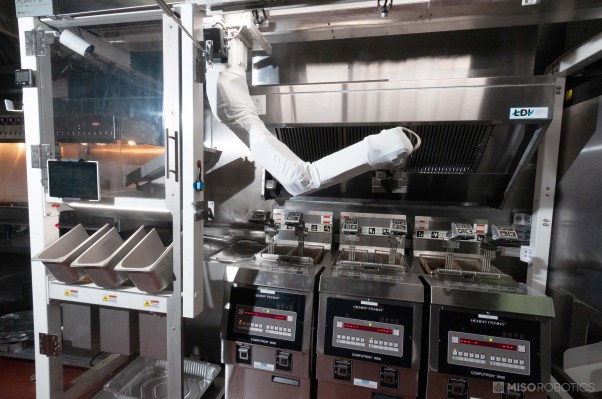 Miso Robotics has announced the new Flippy, its robotic arm for hamburger cooking, following its successful pilot at White Castles. Flippy 2, the new robot, is intended to automate basic cooking tasks in fast-food restaurants.
Miso noted in a release that primary staff feedback was that Flippy needed too much assistance to perform its primary cooking tasks. This includes handling the raw food and placing the cooked food into the holding era. Flippy replaced the need to continuously monitor and adjust food while it was being cooked, but not the follow-up.

Flippy 2 is a significant improvement on its predecessor. We are grateful to White Castle for their insights and helped us push the development of Flippy 2 in a real restaurant setting. Flippy 2 is smaller and more efficient than its predecessor and allows for greater production with its basket filling, emptying, and returning capabilities. Our goal since the inception of Flippy has been to offer a flexible solution that works seamlessly with any kitchen, without disruption.

Miso claims that the smaller version of the robot can increase throughput by almost a third over the predecessor and requires significantly less human assistance. Restaurants are experiencing widespread shortages of workers due to the pandemic.
capablesignificantlycookinggetsflippytechcrunchfoodversionhamburgercookingtasksmisowhiteprimaryrobot
2.2k Like

How I Style Air-Dried Hair