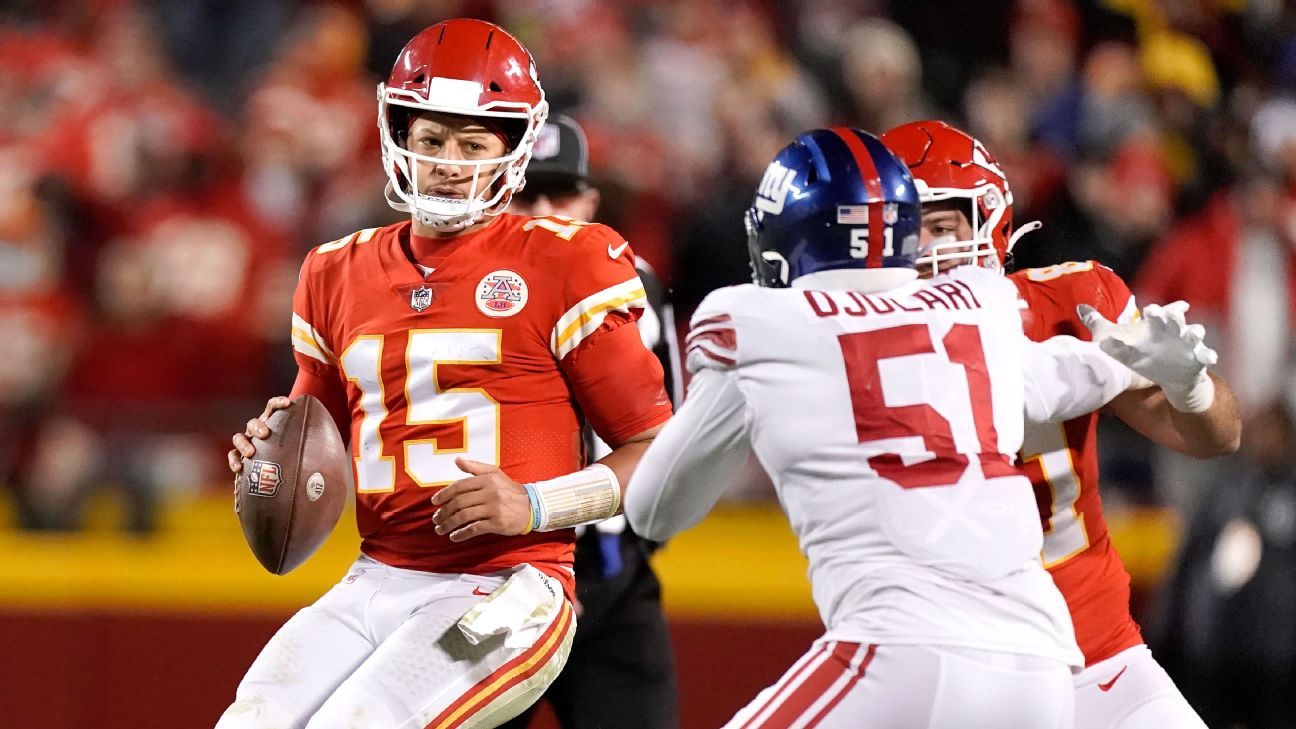 Patrick Mahomes maneuvers through defenders to pass to Tyreek Hills in the end zone, giving the Chiefs a 7-0 lead. (0:28).
KANSAS CITY MO. Monday's game against New York Giants was the most important for the Kansas City Chiefs. Their record was now 4-4, but they won 20-17 with an ugly win.

It is difficult to see how Chiefs gained momentum from this win. They had to win the Giants' last game, which is a bad sign for their schedule, which has them playing against the Green Bay Packers and Las Vegas Raiders, respectively, over the next three weeks.

Patrick Mahomes, Chiefs quarterback, said that "we can move the ball on pretty much any coverage." "We have an answer for every defense." You've seen it all the time. There are times when we stall or don't execute, or I throw the ball in the wrong spot or the receiver doesn’t see it the way I do.

Twelve penalties were taken by the Chiefs for 103 yards. This was their fourth consecutive game that featured multiple turnovers.

Andy Reid, Chiefs coach, said that "Everything is not perfect right now, but we're fighting through it."

QB breakdown. Mahomes completed eight of his passes and appeared to be on his way towards a big game. Mahomes' ninth pass bounced off Jerick McKinnon's face mask and was intercepted. This marked a dramatic shift in his fortunes. Mahomes completed six of 19 passes in the second half. His 4.3 yards per attempt was his lowest for a first-half this season. Because of the Titans' loss last week, Mahomes threw many quick passes to get the ball out quickly.

Mahome stated, "I know that it's happening week after week the last few weeks but we'll snap out and we'll start executing and when it does we'll have a hard offense to stop."

Troubling trend: Two more turnovers by the Chiefs added to their league lead of 19 They were able to overcome some of their turnovers earlier in the season because they scored almost every time they didn’t give it up. This is no longer true. After a Chiefs intercept, one of their touchdown drives against Giants was 13 yards long.

Reid stated that "Things aren’t as smooth as they used to be [in recent years]" but that they will get there. "We just have to keep working."
passeschiefsyardscontinuesballgiantsseasonconfidentweekstruggleforwardmahomesgamecantmovingrightpatrick
2.2k Like