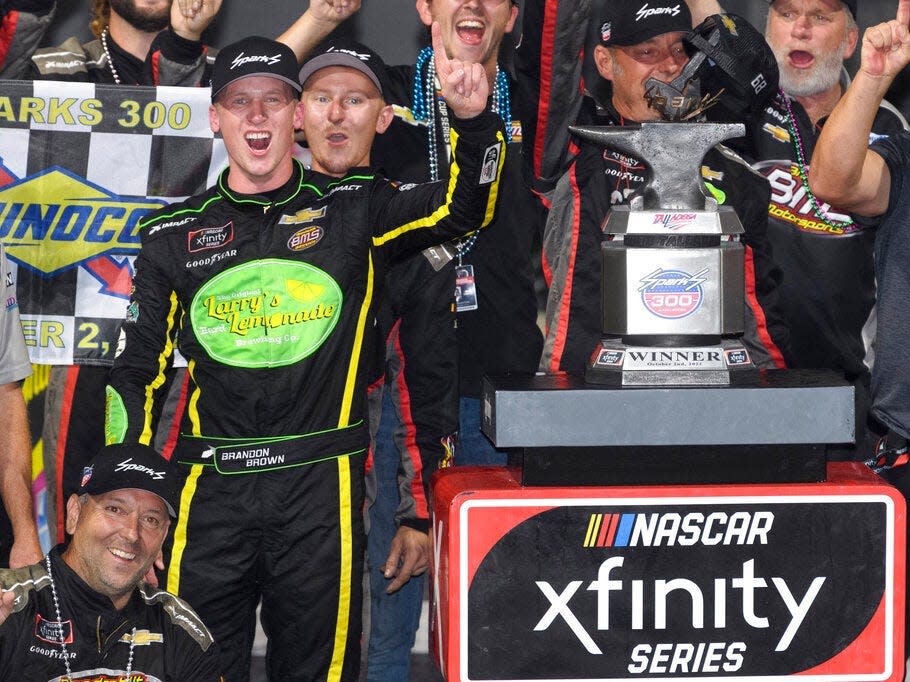 After winning a NASCAR Xfinity Series car race in Talladega on Saturday Oct. 2, 2021 in Talladega Ala., Brandon Brown celebrates in Victory Lane.
A NBC Sports reporter mistakenly interpreted anti-Biden chants from a NASCAR race to be "Let's go, Brandon!"

An AR-15 lower receiver is being sold by a South Carolina firearms business inscribed with the slogan.

This phrase was created at Talladega Superspeedway in October 2, following the first win of NASCAR's driver Brandon Brown during the league's Xfinity Series. Brown was being interviewed by NBC Sports while she was being chanted "F-ck Joe Biden" by the crowd. She mistakenly thought it was "Let's go Brandon".

According to the Department of Justice, lower receivers must be manufactured with serial numbers, sold by licensed firearms dealers, and contain the firing mechanism, trigger control group, hammer, and mounting points.

Many visitors left comments on the site asking if the company would manufacture the product for other automatic rifle platforms. One customer wrote a review about the lower receiver, praising Palmetto State Armory's knowledge of the phrase "more than half America is chanting".

Insider reached out to Palmetto State Armory and Culper Precision for comments.

Business Insider has the original article.
brandonmagazinesnascardealersgunpartsoriginatedfirearmsracestatereceiverletsweaponengravedsellingnbcphrasesloganar15
2.2k Like