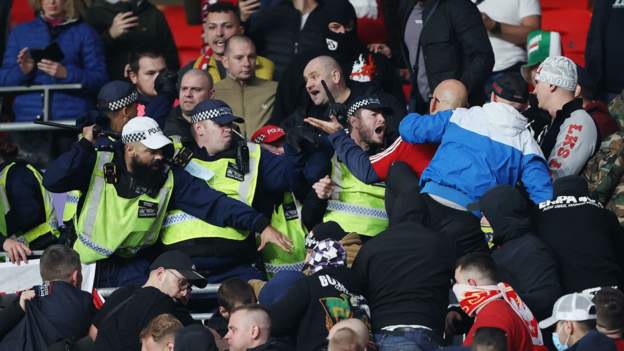 Hungary fans were banned from Poland's World Cup qualifier after they clashed with police at Wembley in October.

Metropolitan Police stated that minor disorder broke out when a fan was taken into custody for "a racially aggrieved public order offense" following comments directed at a steward.

Fifa has confirmed that Hungary must play in Poland on 15 November without any fans.

The sides also ran into trouble when they met in Budapest in September. Fifa ordered Hungary to play two matches behind closed-doors because of the racism experienced by England players.

Uefa issued a June fine to the Hungarian Federation and ordered the closure of three games at the stadium. The final match was suspended because of discriminatory behavior by their supporters during Euro 2020.

This sanction was not applicable to England's visit, as the World Cup qualifier under Fifa control was not under Uefa's control. Uefa did not request that the punishment be transferred.

Piara Powar (executive director of Fare Network's anti-discrimination organization Fare Network) previously stated to BBC Sport that Hungary has "the most problematic fanbase" in Europe in terms of their national teams.
finedqualifierworldclashesplayfansswissuefamatchhungarybannedpolandwembleyordered
2.2k Like