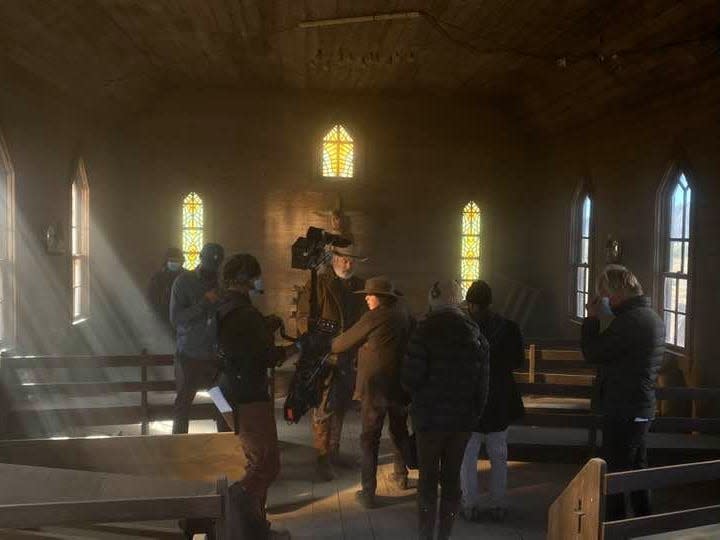 Halyna Hutchins, wearing a beanie with headphones and "Rust" headphones, stands in front of the camera. Serge Svetnoy/Facebook
Moments after Halyna Houtchins was shot to death on the "Rust", set, she reportedly stated: "That wasn't good at all."

According to the Los Angeles Times, Hutchins made these comments to a boom operator shortly after Alec Baldwin had shot her.

Baldwin used a prop gun to shoot Hutchins on the set of the movie on October 21. This fatally wound Hutchins.

These were the words Halyna Hutchins, cinematographer, said after Alec Baldwin shot her on the New Mexico set for his movie "Rust."

According to the Los Angeles Times, Hutchins made the remarks to a boom operator after Baldwin, who was producing and staring in the indie Western, fired one bullet from a prop pistol while they were rehearsing a scene. It struck Hutchins in his chest and directed Joel Souza in his shoulder.

Someone shouted "Medic!" in the aftermath of the shooting at Bonanza Creek Ranch's small church. According to the newspaper, crew members gathered around Hutchins in an effort to stop the bleeding.

A boom operator said, "Oh, that wasn't good." Hutchins responded with "Not that was any good." The news outlet reported that it was not good at all.

Los Angeles Times reported that the account was based on interviews of 14 members of "Rust", including nine crew members who were present on the day of shooting. They also had access to film permits, emails, and text messages from "Rust".

Baldwin fired the FD Pietta Colt.45 revolver. It was supposed to have been loaded with dummy ammunition, but authorities claim that live ammunition was somehow loaded into it. Police are still investigating the incident.

According to the Los Angeles Times, Baldwin repeatedly repeated "What the F--k just happened" after firing the single shot.

Baldwin was about to practice his "cross draw" scene seconds earlier.

Baldwin said, as he reached for the revolver and pulled it out of its holster to tell crewmembers, "So," Baldwin told them. The newspaper reported.

According to an affidavit released by police, Halls shouted "cold gun" when he handed the gun to Baldwin.

Halls claimed to investigators that he didn't check all rounds in the barrel before it was given Baldwin. Another affidavit stated the same.

According to the Los Angeles Times, Hutchins was standing two feet from Baldwin's gun as Baldwin fired it.

"What the f---k was that?" It's burning! According to the news outlet, Baldwin pulled the trigger. Souza shouted.

According to the report, Hutchins, Souza, who was standing beside Hutchins at that time, immediately fell to their deaths after the gun was fired.

"I was staring at her and I saw an exit wound that had started to pour blood. That's when people shouted, 'She's dead! "Everything went crazy," a crew member said to the Los Angeles Times.