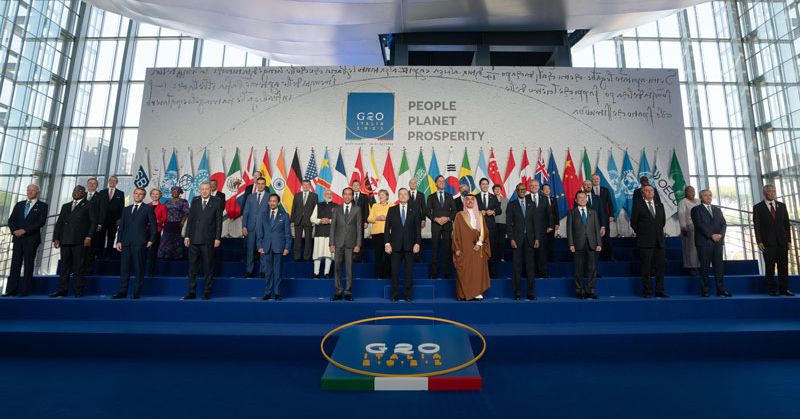 The Organization for Economic Cooperation and Development has announced that world leaders have formally committed to a revision of international tax rules, which would impose a global minimum tax of 15% on profits from businesses. This agreement was reached at the G20 summit in Rome. It is meant to limit the tax benefits that large corporations receive when they shift their profits to tax havens. Supporters of the deal claim it has reduced the tax revenue that countries can collect.
This deal will also update international tax laws to reflect digital realities. The New York Times reports that instead of taxing companies where they operate, the rules will allow countries to tax companies where their services are sold. These changes will have an impact on European tech companies. These companies often have their headquarters in Ireland, which allows them to take advantage of Ireland's lower tax rate (12.5%) and sell services throughout the continent.

The rules have been accepted by 136 countries

The Inclusive Framework agreement is designed to reverse the decades-long decline of corporate tax rates worldwide. According to the OECD, the new rules will generate an additional $150 billion annually in tax revenue. The NYT reports that the Biden administration expects the changes to bring $350 billion more tax revenue in the US over the next ten year.

Janet Yellen, US Treasury Secretary, praised the historic agreement, saying it would end the harmful race to the bottom in corporate taxation. The new rules are the OECD notes.

This deal will make the world a more successful place for American workers and businesses. America will no longer compete with other countries on their ability to offer lower rates. Instead, we will be competing on our skills, our ideas, and our ability to innovate. This is a race that America can win. Secretary Janet Yellen (@SecYellen), October 30, 2021

Companies with annual revenues over 750 million will be subject to the 15% tax floor, which is equivalent to $867 million. This effectively limits it to the largest companies in the world. The Washington Post explains that if one of these companies moves profits to a low tax country, it will be required to pay a top up tax in the country it is headquartered. This effectively forces it to pay the difference to reach the minimum 15%.

The challenge now for the 136 nations is to implement the new rules, even though an agreement was reached. WaPo in the US notes, for instance, that tax treaty laws may need to change. This would require support from at least two thirds of senators. Oxfam, a charity, has also criticised the generous deals and the fact it applies to less than 100 businesses worldwide.
taxcorporateminimumhistoricdealcountriesendorsedglobalrevenueworldagreementprofitsoecdcompaniesrulesrateformallyleaders
2.2k Like