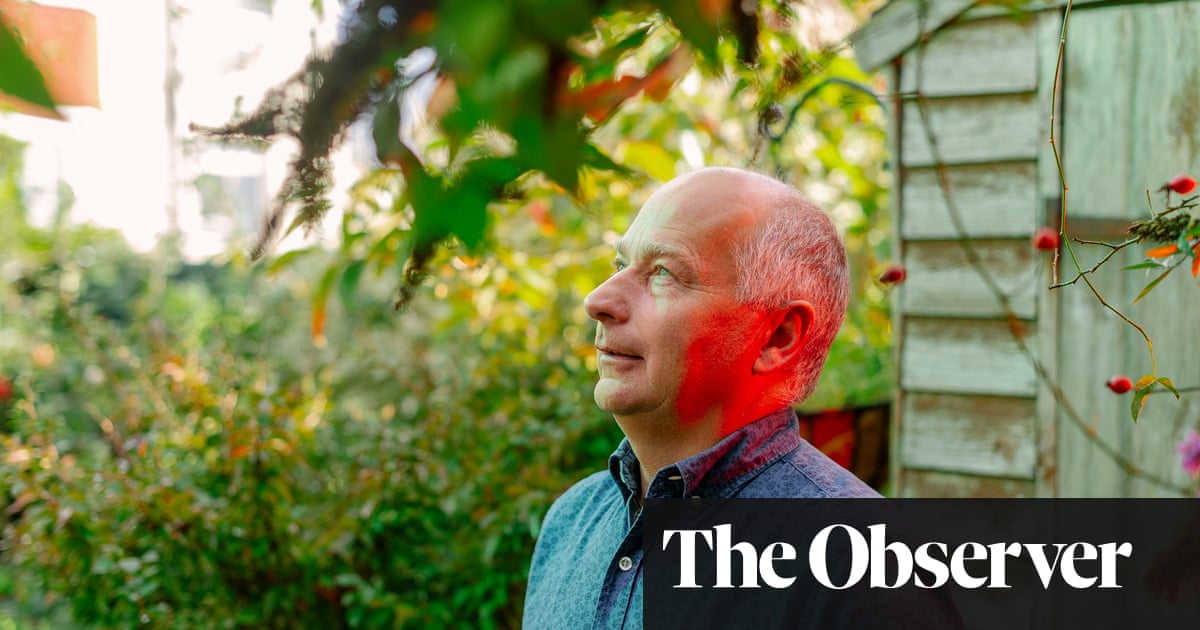 Professor Peter Stott, a forensic climate detective, examines the human footprint on extreme weather. He is a specialist in mathematics and heads the Hadley Centre for Climate Science and Services in Exeter's climate monitoring and attribution group. He was also part of the UN Intergovernmental Panel on Climate Change team which won the Nobel Peace Prize in 2007. Stott, who began his career in the field over 25 years ago has been at the forefront of the fight against the fossil fuel lobby and petrostates, as well as the sceptical right-wing US politicians. He details this in his new book. Hot Air: The Inside Story Of the Fight Against Climate Change Denial. Along with his wife, he is exploring new ways of scientific expression. He co-founded the Climate Stories initiative which brings scientists, artists, and the general public together to address the climate crisis by creating new songs, poems, and pictures.
A quarter of a century has passed in climate science. How does this feel on a personal level?

Sometimes I felt excited about the scientific progress and hopeful that it would be implemented. Sometimes, however, I felt disillusioned that our warnings weren't being heeded, as at Copenhagen 2009 and when we were attacked in Moscow 2004 or the United States and UK following Climategate. At these times, I felt that I was uncovering an unpleasant truth and that there were those who tried to stop me. The clock is ticking and I am anxious about this whole thing. It has been another hot year and no action has been taken to alter the data trends. This makes me worry about the science that I have been doing for 26 years. Although I had hoped that my work would improve the world, I am becoming increasingly concerned that it will not.

Climate attribution is your area of expertise. It links the crime (climate chaos), to the criminal (human omissions, especially from fossil fuel companies). This is an extremely sensitive and technical activity. How can this knowledge be applied?

My field was still very new when I began, and not only to me but to all my scientists colleagues. Extreme weather has made it a hugely popular topic. It is important that science can now show the connection between greenhouse gas emissions, rapidly increasing floods, and heatwaves. Weather forecasters like Laura Tobin have begun to include climate change in their TV broadcasts. As we can make more definitive and rapid statements, I believe we will see more of this in the future.

Although I had hoped that my work would improve the world, I am becoming increasingly worried about whether this will happen.

This is already happening. The Hadley Centre quickly analysed the remarkable 49.6C temperature records in Canada earlier this year and showed that it would have been impossible without human emissions. This information is extremely relevant for people. This information can be used to save lives and property during an emergency and to plan for the future. It is not enough to know the weather for the future. It is important to understand the changing climate.

You've been to many Cop climate conferences, and you will again be at Glasgow this week. What are your expectations?

Cop26 is crucial. Cop26 is so important. We've had a delay of years due to Covid. The previous Cop in Madrid in 2019 was not very successful. So, Glasgow is an opportunity for governments to raise their ambition. We can't prevent global warming exceeding 2C if they don't. Extreme weather all over the globe has shown how critical the situation is. In August's IPCC report, scientists reached the most dire conclusions they have ever seen. If Paris is to be achieved, reductions must be made quickly and should be substantial. There is broad agreement now. Most governments recognize the need to change. China is the biggest emitter. I've worked with its scientists and they are telling them exactly the same thing as scientists from other countries: that weather is getting more extreme and more people are affected. Biden has led the US to rejoin the Paris Agreement, which is a significant positive development since Trump's departure.

Trump has framed your book. It begins with Trump's election to the presidency and ends with his defeat. What was his impact on climate science and technology?

My scientific colleagues were more fearful than I remember seeing them on the night of the vote for his possible reelection. We knew that things could get worse for the climate and us if he wins.

Trump considered US climate science wrong. He placed sceptics at the top of key positions. Scott Pruit, [former] head Environment Protection Agency, stated that warming is not linked to fossil fuels. Trump's four-year tenure was limited, so he was not able to do much damage.

There is an increasingly clear dividing line in international politics. We are no longer seeing the old left-right divide, but a struggle between those who accept risk and those who deny it.

From a scientific perspective, we know what risk looks like. We are confident about extreme weather's increasing frequency and severity and how these risks will increase if greenhouse gases continue to be released. There are also very frightening risks like the collapse of the Antarctic ice sheets and the Amazon rainforest. Although we are unable to estimate the likelihood of some of these events, we are certain that they are extremely dangerous and must be addressed by the world. We are extremely frustrated when politicians fail to understand the importance of risk. It doesn't necessarily mean that there isn't substantial risk, just because scientific uncertainty exists.

Michael Mann, a fellow climate scientist, suggested that Russia may be behind much of climate denial. You describe a violent meeting in Moscow that turned into a shouting match, and then ended with walkouts.

Russia is a major oil exporter and can be very strict in protecting its business. I was one of those scientists who was hounded at a Moscow climate event in 2004. Andrei Illarionov was Putin's chief adviser. He had assembled the top climate deniers from around the globe and given them a platform to argue that climate science is corrupt, there was no link between fossil fuels, climate change, or that even if there were, it would be in Russia's favor. Illarionov claimed that climate change was being used against Russia. He even used war. This entire incident was a trial. The Russian scientists who were actually there were silenced or marginalized. Russia was using all of us to gain influence in international negotiations. This ruthlessness persists to this day and makes it difficult to tell the scientific truth there.

You describe some of the dirty tricks used during Climategate. This was when the leak of and misrepresentation in hacked emails by climate scientist Philip Jones were used as a way to create doubt before the 2009 Copenhagen climate conference. Jones and his associates were eventually exonerated. But what was the motive behind this attack on Jones?

It was suspicious timing. It happened just before Copenhagen. The hacked data was suddenly found on a Russian server. It was quickly circulated among denizen communities. It was clear that there were people who wanted to obtain the information and use it as efficiently as possible. Things got worse for the UK media. Daily Express and Daily Mail wanted to use this material to prove that global warming was a scam. Although Climategate is not the reason Copenhagen fell apart, I think it was important to note that Copenhagen's mood at the time.

Negative moods can hinder negotiations. This hack was used to create a negative atmosphere.

One scientist said that the community was scared to death at the time. The situation is quite different today, however.

Climategate shaken public confidence and made climate scientists more cautious as a community. This dampening effect meant that the public was hearing less just when they needed it. Science has advanced. Science has advanced. The evidence is more clear and the language is better. We can see this clarity in the IPCC's latest report. It calls for urgent action.

What has changed in the media's stance?

The battle for the future is over. The majority of media accepts that climate change is real and must engage with it. There are less false-balance TV debates between scientists and deniers. It's not happening at the BBC. The cost of climate action has been questioned by denialism. This debate may not be informed not by science but by someone saying it is too costly against someone else. I hope that the media will again be cautious about attempting to find a false balance. Research shows that doing nothing is much more expensive than doing something.

Scientists have also failed to communicate their messages well, relying too heavily on hard data and not enough storytelling that touches the emotions.

This is an honest criticism. As a community, I wish we had more engagement with storytelling. We all believed that the numbers we presented to policymakers would resonate with the public when I started my career in mid-90s. Communication strategy was not something we had considered enough. For example, at the IPCC meeting of 2007, we produced a great report for policymakers but it was not for the general public. Scientists believed that the data we generated in laboratories would be sufficient to last the day. However, back then, we didn't think enough about how to connect with people's fears and worries. Since then, things have changed a lot. Engaging with artists, economists, and social scientists is a key part of my work. These stories should be shared and challenged.

What should scientists do to encourage activism?

My book is a form of activism. Scientists should not be afraid to speak up about the consequences of their findings. Science must be implemented. Citizens must make informed decisions about what to do in order to achieve this, at least in democratic countries. Scientists, citizens, and the government must have a dialogue. This is where the values, aspirations, and hopes of people come in. There are many options available to reduce emissions and make the most of the new opportunities. Citizens make the choices. Scientists should not be passive and be oblivious to the consequences. This is why I wrote and shared this story.

Atlantic Books publishes Hot Air: The Inside Story from the Battle Against Climate Change Denial, by Peter Stott (18.99). To support the Guardian and Observer go to guardianbookshop.com. Delivery fees may apply
denialistsneedchangescientificstottpublicsciencecostspeterworlddoingquestionweathercostscientistsfarbookclimateprof
2.2k Like

Can we fix climate models to better predict record-shattering weather?