Over the last four decades, HIV/AIDS has killed at least 700,000 Americans. COVID-19 has killed more in two years. 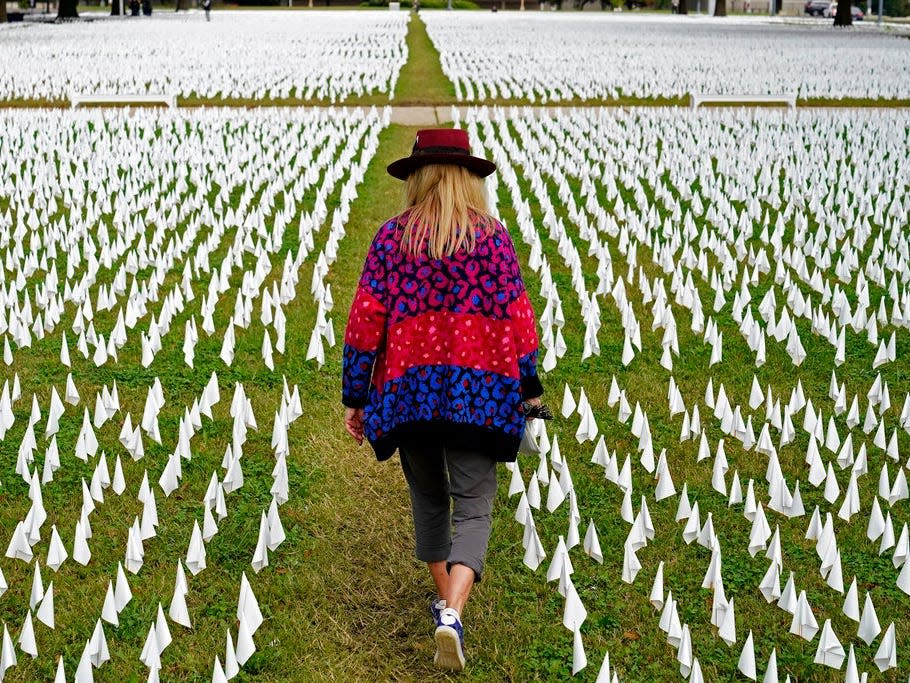 A visitor sits down on a bench and looks at Suzanne Brennan Firstenberg’s "In America, Remember" temporary art installation. It is made up white flags that are meant to remember those who have lost their lives to COVID-19. The installation was installed on Saturday, October 2, 2021, at the National Mall in Washington. AP Photo/Jose Luis Magana
Since 1981, over 700,000 Americans have died of HIV-related illnesses.

HIV-related deaths and infections have been significantly reduced by antiretroviral therapy.

Both HIV/AIDS and COVID-19 have had adisproportionate impact on minority communities.

COVID-19 has claimed the lives of approximately 750,000 Americans in the past two years. Officially, it surpasses the deaths from HIV/AIDS in the last 40 years to be the deadliest pandemic in the country.

According to Kaiser Family Foundation data, more than 700,000.000 people have died due to HIV-related illnesses since 1981 when it was first discovered in the US. The 1990s saw the development of highly effective antiretroviral treatments that made HIV/AIDS less of a leading cause for death among young adults. According to the peer-reviewed journal "AIDS," HIV/AIDS has been deemed a manageable condition.

Pre-Exposure Prophylaxis (PrEP), an antiretroviral therapy, is widely accepted today due to its substantial reduction in HIV-related deaths and infections.

Researchers wrote that antiretroviral therapy had been rapidly developed and proved life-saving for millions of people. They also helped to expose inequalities in health access between poor and rich countries.

Despite the differences in rates of transmission and death, HIV/AIDS and COVID-19 have had disproportionately negative effects on minority communities.

Despite being a small percentage of the population, large numbers of HIV-positive individuals are still attributed to Black and Latinx people. According to the Centers for Disease Control and Prevention, the epidemic continues to affect gay men, bisexual men and transgender people of all races and ethnicities.

CDC data also shows that Black, Latinx and Asian Americans are at greater risk of COVID-19 infection and hospitalization.

However, projections for COVID-19-related death are much more dire than those for HIV/AIDS.

According to HIV.gov, the number of HIV-related infections per year has been steadily declining over the past several years. This is a decrease of more than two-thirds from the peak of the epidemic in mid-1980s. According to HIV.gov, approximately 1 million Americans aged 13 and older have HIV. More than half of them are either virally suppressed (or undetectable).

HIV-positive people can live a healthy life with no sexual transmission to their partners. This reduces the risk of death.

According to HIV.gov, there were 15,815 deaths in 2019 among Americans living with HIV.

However, the US still records tens to thousands of COVID-19-related infections every day. According to New York Times data, the daily average death rate is still above 1,000 per day as of October 29.

Business Insider has the original article.
covid19decadesnumberaccordinghivrelatedamericanshivinfectionskilledhivaidsindividuals700000therapies
2.2k Like

Over the last four decades, HIV/AIDS has killed at least 700,000 Americans. COVID-19 has killed more in two years.

Less Than 0.001 Percent of Fully Vaccinated Americans Died From a COVID-19 Infection

Forecast: 100,000 More Americans Will Die From Covid-19 by December Without Major Behavior Changes