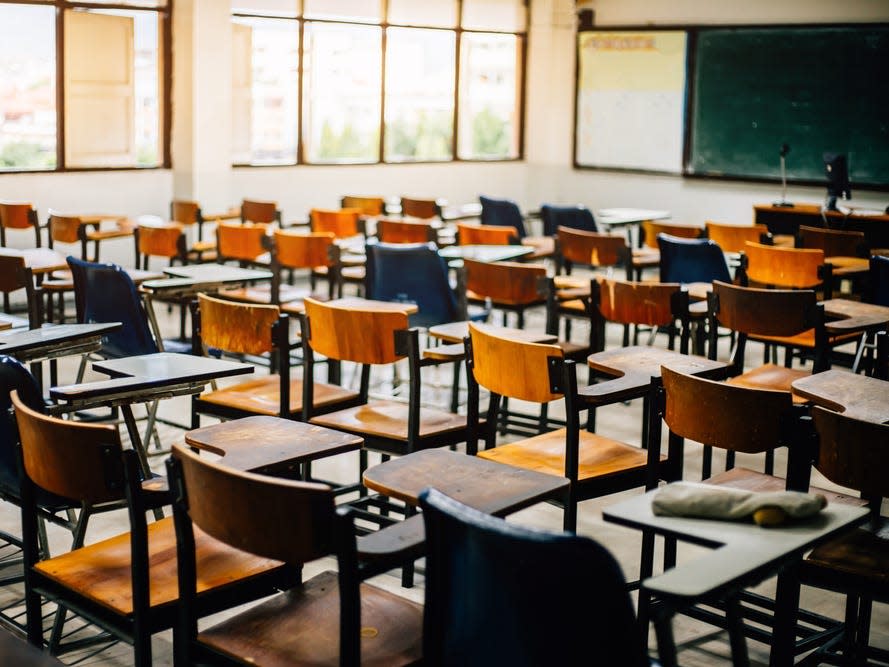 A school classroom. MILATAS/Getty Images
After allegedly telling a student that "we don’t negotiate with terrorists", a New Jersey teaching assistant was fired.

Mohammed Zubi said that WABC-TV viewers were in shock after the comment was made by the teacher.

After being accused of telling an Arab-Muslim student, "We don't negotiate avec terrorists", a New Jersey teacher was fired.

CNN reported that the incident occurred at Ridgefield Memorial High School when Mohammed Zubi (17) asked the teacher assistant if additional time could be granted to complete an assignment.

"He replied saying, "We don't negotiate avec terrorists." So I look around in shock and see people laughing and other people in shock. I then turn around to ask my friend if he really said that. Zubi said that she agreed to the statement.

Nichoalas Velez, another student, said to the news station that the comments of the unidentified teacher shocked everyone in the class.

CNN reports that the high school senior didn't go to school for around a week following the insult.

Ridgefield School District is investigating the incident and stated that it "has absolutely zero tolerance for any form of discrimination against any student, staff member or employee," NJ.com reported.

The statement also stated that the district will pursue all legal remedies against the staff member.

According to the report, "While the District cannot legally make comments on student or personnel matters, the public should know that the District immediately suspended a staff member while it conducts a full investigation."

According to a statement dated October 22, the Council on American Islamic Relations Executive Director Selaedin Maqsut, New Jersey, demanded a transparent investigation into the allegations. The advocacy group also offered training to the district's teachers and staff in order to combat Islamophobia, bullying, and other forms of Islamophobia.

Masksut stated that educators must be educated about Islam and Muslims earlier this week.

A North Carolina teacher resigned after word spread that she told Black students that without the Constitution, they would be her 'field slaves'

The Latest: Union official: Fired guard getting job back