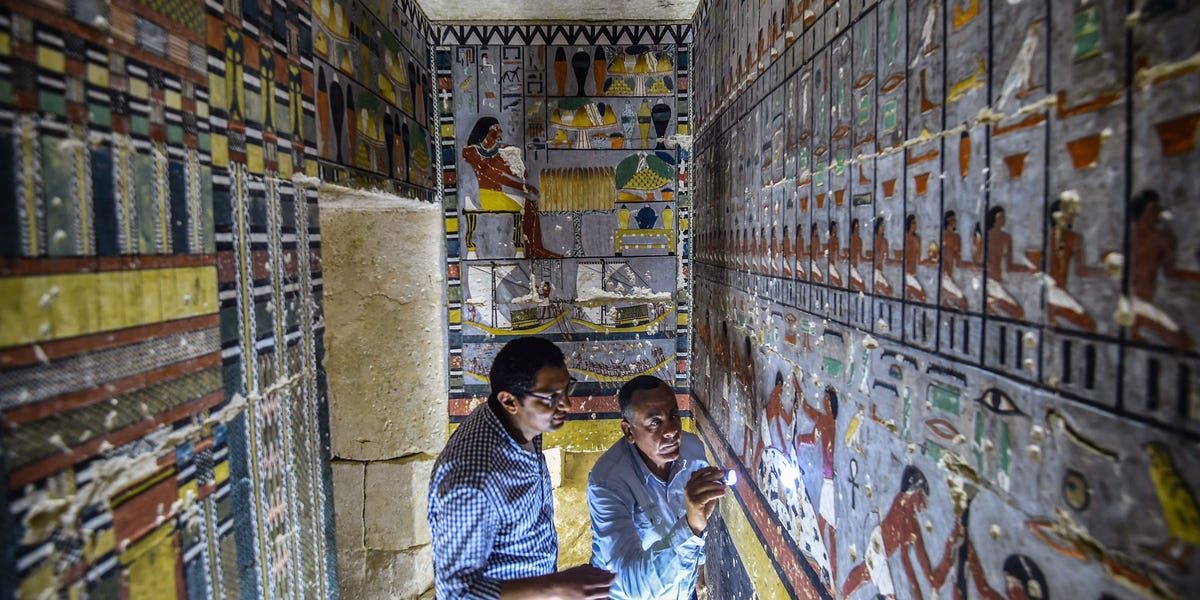 A mummy from Egypt embalmed using advanced techniques is thought to be older than originally believed.
This discovery indicates that sophisticated mummification skills existed 1,000 years before previously thought.

Experts believe the discovery could change our understanding of the evolution and history of mummification.

An analysis of an Egyptian mummy from the past suggests that modern mummification techniques were used 1000 years before previously thought. This rewrites the history of Egyptian funerary rituals.

Khuwy is a mummy that was discovered. He is believed to be a nobleman of high rank. In 2019, he was discovered at the Necropolis, an ancient burial ground for Egyptian pharaohs, and royals.

The Observer reported that scientists now believe Khuwy is older than originally thought. He dates back to Egypt's Old Kingdom. This would make him one the oldest Egyptian mummies to have been discovered.

Khuwy was embalmed with advanced techniques that were developed later.

His skin was preserved with expensive resins made of tree sap. His body was then impregnated and bound with linen dressings.

Professor SalimaIkram, head Egyptology at The American University in Cairo, stated to The Observer, "This would completely change our understanding of how the evolution of mummification was explained."

"If this is an Old Kingdom mummy it will require that all books on mummification and the history the Old Kingdom are revised."

Ikram stated that until now we believed that Old Kingdom mummification was simple. Basic desiccation wasn't always successful and no removal of brain or other internal organs were done.

Ikram was shocked by the amount resin used to preserve his mummy. This is not a common practice in Old Kingdom mummies.

She said that the deceased's exterior was often more important than their interior.

"This mummy is awash in resins and textiles, and gives a completely new impression of mummification. She said that it actually looks more like the mummies discovered 1,000 years later.

Ikram explained to The National that the resin used was imported from the Near East, most likely Lebanon. This shows that trade with neighbouring empires around this time was much more extensive than previously believed.

National Geographic's Lost Treasures of Egypt series will document the discovery. It airs on 7 November.

Tom Cook, the producer of the series for Windfall Films said that Ikram was initially skeptical that Khuwy dated back into the Old Kingdom due to advanced mummification techniques.

Cook explained to the outlet that although they knew that the pottery in the tomb belonged to the Old Kingdom, [Ikram] didn’t believe the mummy was from that period because it was too well preserved."

"But she began to come around [to the idea] over the course of her investigation."

The Smithsonian stated that Khuwy's ornamental tomb had hieroglyphics which suggested the burial occurred during the Fifth Dynasty period. This was between the 25th and mid-24th centuries B.C.E.

Also, archeologists found pottery and jars that were used to preserve body parts during mummification. These jars can be traced back to the time when archeologists discovered them.

Ikram's team will continue to test the remains to confirm Khuwy's ownership.

According to her, one possibility is that another person was mummified and buried in a repurposing of the grave.

Ikram stated that he was still hesitant to conduct carbon-14 dating until then, and it would likely take six to 8 months.
previouslyusedoldgroundmummificationdiscoveryvastikramegyptianunderstoodpharaohsdiscoveredkingdomchangeburialtoldegyptshistorymummy
2.2k Like