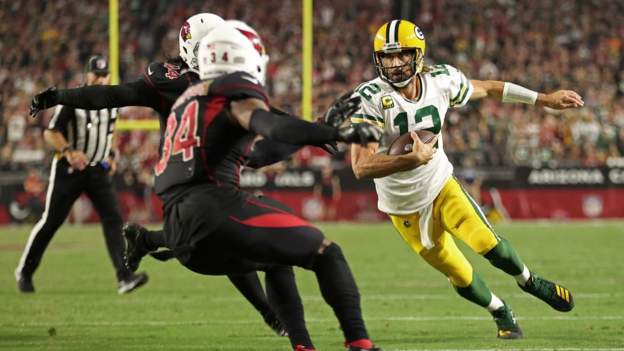 The Green Bay Packers won the 24-21 victory over the Arizona Cardinals to end the NFL's unbeaten streak.

With 15 seconds remaining, the hosts appeared set to win but Kyler Murray's pass toward AJ Green was intercepted by Rasul Douglas in the end zone.

The teams will now battle for the NFC Championship and a spot in the Super Bowl in the post-season.

After receivers Davante Adam and Allen Lazard and the defensive coordinator Joe Barry tested positive for Covid-19 in their tests, Packers preparations were disrupted. So quarterback Aaron Rodgers relied on his running game.

They had 151 yards of rushing, compared to Arizona's 75. Last season's MVP Rodgers threw 184 yards with two touchdowns and no interceptions.

Murray threw for 274 yard, but no touchdowns or interceptions. The second was from cornerback Douglas who was signed by the Cardinals just three weeks earlier.

Rodgers was kind enough to praise his team's resilience and said, "This team is tough, physically, and gritty." It was amazing to see our defense win the game on the road.

Arizona had taken the lead by running back Chase Edmonds's touchdown, but the Packers quickly retook the lead when Aaron Jones scored a touchdown.

At the break, the Packers were leading 10-7. However Rodgers found Randall Cobb in the endzone shortly afterwards to make it 17-7.

James Conner immediately responded with a touchdown for the Cardinals. A Cobb touchdown made it 24-14 in favor of the Packers at halftime.

Conner's second touchdown cut the Packers' deficit to 24-21. After the Packers failed to score a touchdown with less that five minutes remaining, it was a close call.

With 3:23 remaining, Murray led the Cardinals from their one-yard line. However, Douglas' intercept saw them stand firm.
arizonarodgerstouchdowngreenunbeatennflzonetouchdownsendyardscardinalspackersseasonbaystartthrew
2.2k Like