Facebook’s Meta watch has a camera notch, according to first leaked image 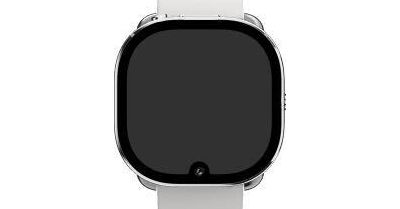 The first images leaked by Facebook of their smartwatch show a notch. This is what people love to laugh at and what appears to have been a front-facing camera. The watch's screen is not visible in the photo but the tiny camera eye can be clearly seen.
Bloomberg first reported the photo. It was found in the company's Ray-Ban Stories app. Milan, as the watch is known in the code, has a large screen similar to the Apple Watch, but it doesn't have a camera. Bloomberg suggests that the picture may not reflect what consumers will see. It confirms previous reporting on Facebook's success.

The second, detached camera will be available if this watch is identical to the one we reviewed in June. The front-facing camera can be used to make video calls and has a reasonable 1080p resolution. LTE will be supported by the watch. The Information reported in February that the watch would have messaging, health and fitness features.

The original plan was to launch it in Summer 2022. Bloomberg's source said that the timing has not been decided.

Google, Garmin and Samsung dominate the smartwatch market. Facebook's offering is designed to be more like a smartphone to differentiate itself. At Thursday's Connect keynote, Mark Zuckerberg, CEO, made several comments about closed platforms. He may have been referring to Android or iOS. Facebook partly blamed Apple's ad tracking features for missing revenue targets earlier this week during its earnings call.

Today, Facebook rebranded Meta, its parent company. However, a MetaWatch dating back to 2014 is already in existence. This will likely lead to bizarre lawsuits regarding branding and intellectual property, and all the legal discovery that comes with it.