How legumes give oxygen to symbiotic bacteria in their roots 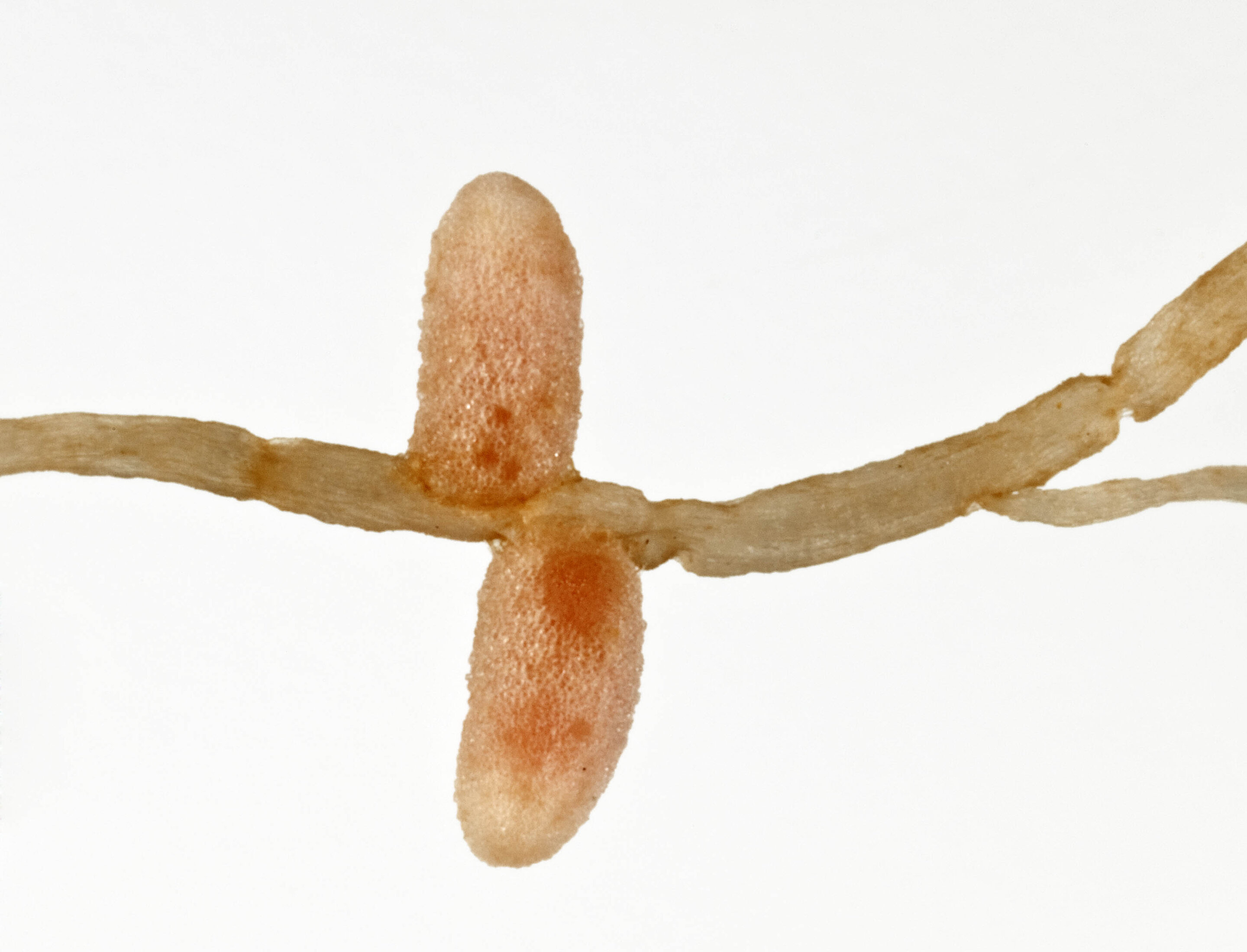 Legume Root nodules are pink-colored by leghaemoglobin. This is due to a symbiotic relationship of the plant with beneficial bacteria. Credit: John Innes Center
Scientists have discovered the genetics of legumes that control the production and distribution of an oxygen-carrying molecular. This is crucial for the plant's close relationship with nitrogen-fixing bacteria.

This discovery has the potential to allow other plants to make ammonia from bacteria, reducing the need to use polluting and fossil fuel-dependent synthetic fertilizer on crops.

Symbiotic bacteria can live in the roots of legume plants. These bacteria can convert nitrogen from the air into ammonia, which is a vital nutrient for plants.

The plants then house the bacteria in root nodules and provide sugars as well as oxygen. To support the symbiosis the oxygen must be right. The bacteria require oxygen to fuel their chemical reactions. However, too much oxygen can inhibit a key enzyme that converts nitrogen in the air to ammonia that can then be used by plants.

Leghemoglobin is the plant's solution for this "oxygen paradox of biological fertilization". Leghemoglobin, which binds oxygen to our blood and is red like hemoglobin, gives legume nodules the pink color. It's not clear how plants can control the amount of this molecule that is produced.

Two transcription factors were identified by the research team that control the amount of leghemoglobin in legume nodules.

This provides a key insight into the mechanisms that legume plants use to create the microaerobic conditions necessary for nitrogen-fixation. This information could be used to improve nitrogen-fixation in legumes, and it would be crucial for the transfer of nodulation from non-legume crop plants, "explains Dr. Jeremy Murray (CEPAMS Group Leader).

Dr. Jeremy Murray says, "While there are many genes that participate in nodulation, this breakthrough is on the gene regulatory network directly involved in nitrogen fixation control."

The research team examined a family of proteins found in plants that includes several members involved in nodulation using the model legume Medicago truncatula. They examined which proteins are produced in symbiosis-housing nudules. They are therefore involved in nitrogen fixation.

They also tried to investigate further by growing plants in an aeroponics system without soil to see the nodules. The plants that were lacking NIN or NLP2 had smaller nodules and smaller sizes. They had lower levels leghemoglobin after closer examination. Further experiments revealed that NIN, NLP2, and NLP2 directly activate leghemoglobin gene expression.

Dr. Murray says, "This research project was solely curiosity-driven. All we knew at the beginning was that the transcription factors we were studying were highly expressed in nitrogen-fixing cell cells, and we weren't initially aware of any connection with leghemoglobins."

This research also provided insights into how this important symbiosis evolved. The researchers discovered that non-symbiotic hemoglobins produced in plants by other members of the transcription factor family are also controlled by them. This is important for the plant's ability to respond to low oxygen levels.

Jeremy explains that this was an exciting discovery because it suggested that transcription factors and their hemoglobin targets had been recruited to nodulation to improve energy in nitrogen-fixing cell cells. This gives a rare glimpse into the evolution of this symbiosis."