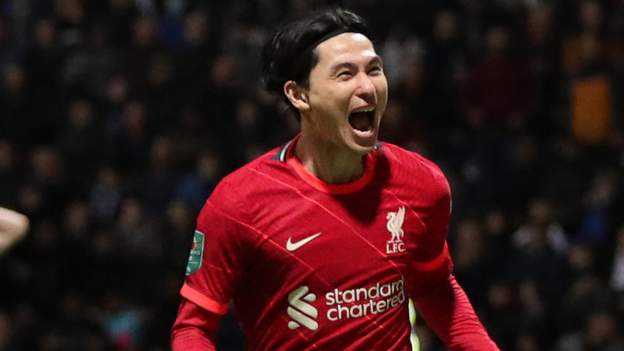 Last update on. From the section League Cup
Liverpool remain unbeaten in 23 of all competitions

Takumi Minamino's second-half goals and Divock Origi's third-half goals secured Liverpool's place at the Carabao Cup quarterfinals. This was at the expense of a determined Preston North End team at Deepdale.

Japan's Minamino scored twice in their 3-0 victory over Norwich City. He finished from Neco Williams' cross, ending the Championship's stubborn resistance after 62 minutes.

Origi, who had also scored in the previous round, produced a stunning improvised finish using his heel to make the final score clear with six minutes left.

Jurgen Klopp dubbed a different Liverpool side than the one that thrashed Manchester United 5-1 on Sunday. Despite being in possession for long periods, Preston was the one who created the best first-half chances.

Preston began cautiously, as they tried to cause a major upset and reach the first quarter-final of the league cup in their history. However, they eventually managed to create some chances. The best came 28 minutes later.

Adrian, Liverpool's goalkeeper, made a spectacular save to deny Sean Maguire. Ryan Ledson's goalbound follow up was blocked by Williams and Brad Potts.

The Liverpool team was disjointed and flat, which is not surprising considering the changes. They failed to score before the interval and then struggled to get going after the break.

Alex Oxlade-Chamberlain was subdued and drove off-target from the box's edge. This was before Minamino's opener.

Liverpool managed to win the tie comfortably when Origi scored from close range. This was after Williams had set up the Reds for the quarter-final draw.

Jurgen Klopp, Liverpool manager: "We didn’t play well. That’s how it is. Although we started well, then we lost the whole structure and that was the problem. We were too energetic and too eager to win the ball.

"As a team, we can do better but as individuals I saw some really good performances. It's all about the next round. That's what we did. It would be difficult with 11 changes. That was obvious.

Frankie McAvoy, Preston manager: "I thought that our game plan was exceptional. We caused Liverpool problems on both the counter. We had the best chance in the first period and Liverpool couldn't penetrate us in the second.

"We made nine changes, but it wasn't much between our players. It's very fine margins. Sometimes it's easy to make mistakes, but tonight I felt that the players who were selected did us proud."
prestontargetroundchangesendorigitakumiliverpoolminaminowilliams02kloppdivockbestthatsplaceteamnorth
2.2k Like