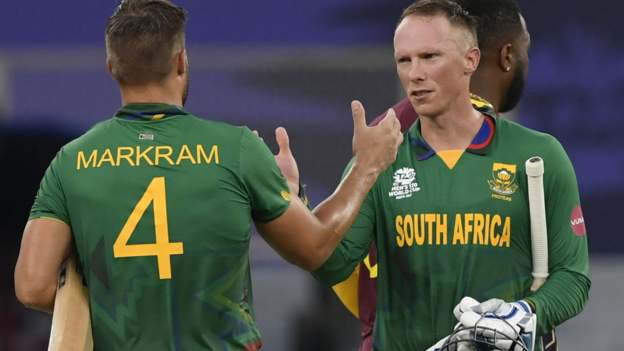 After a second consecutive comprehensive defeat, West Indies, the defending champions are on track to be eliminated from the T20 World Cup.

Three days after being bowled out by England for 55, West Indies witnessed South Africa win an eight-wicket win in Dubai.

The Proteas snatched 144 balls with 10 balls left and won their first tournament win.

The match will be remembered for Quinton de Kock, South Africa's wicketkeeper, who refused to take a knee and withdrew.

If they want to reach the semi-finals, West Indies must defeat the other two Group 1 teams.

They will face Bangladesh in Sharjah Friday and Sri Lanka on Sunday.

Aiden Markram, who used 25 balls to score the fastest fifty, was the winner of the tournament and helped South Africa win.

He was unbeaten at 43 against an ineffective West Indies attack.

South Africa's chase didn't start as planned. Andre Russell produced some magic at mid-off and ran out captain Temba Bavuma. He attempted a risky single in his first over.

Markram was able to combine fluency with power and Van der Dussen played an anchor role in a fast-paced chase.

Although West Indies' batsmen appear to be a formidable unit, they have not been able to make it work and are now in danger of losing their T20 title less than a week into Super 12 phase.

Perhaps South Africa was expecting a shift in their approach after England's humiliation.

Lendl Simmons, the opener, took it very literally. After he poked and prodded his ways to 16 of 35 balls, he was able to hit a boundary without any problems. He then fell in the 14th over.

Evin Lewis made up for Simmons' dot ball bonanza by looking like he was batting in another pitch. In his 35-ball 56 innings, he struck six sixes while Kieron Pollard scored 26 runs off 20.

West Indies were unable to win due to the superb death bowling of Anrich Notje and Dwaine Prtorius. They claimed 1-14 and Dwaine Pretorius respectively, as five wickets fell in the final four overs.

Reaction: "A step in the right direction"

Temba Bavuma, South Africa's captain: "After last game we knew that there were areas where we needed to improve our game. We had to be more clinical, especially with the bat. It's a good step in the right direction.

"Our bowlers were fantastic in the last few weeks and they have again shown their class and skill."

Quinton de Kock: Quinton is a major player for the team. Not just because he has the bat but also because of the role he plays both from a senior and experienced perspective. It was something that I didn't look forward to as a captain.

Kieron Pollard, West Indies captain: "I'm sorry. We lost about 20-25 runs when we batted. That could have had an impact on how we ended up because we started off with a decent start.

"We must dig deeper as a group. As a batting team, we have to dig even deeper. We must be able to stand up and play good cricket.
second batting markram van captain t20 africa world quinton defeat west indies win cup south suffer
2.2k Like