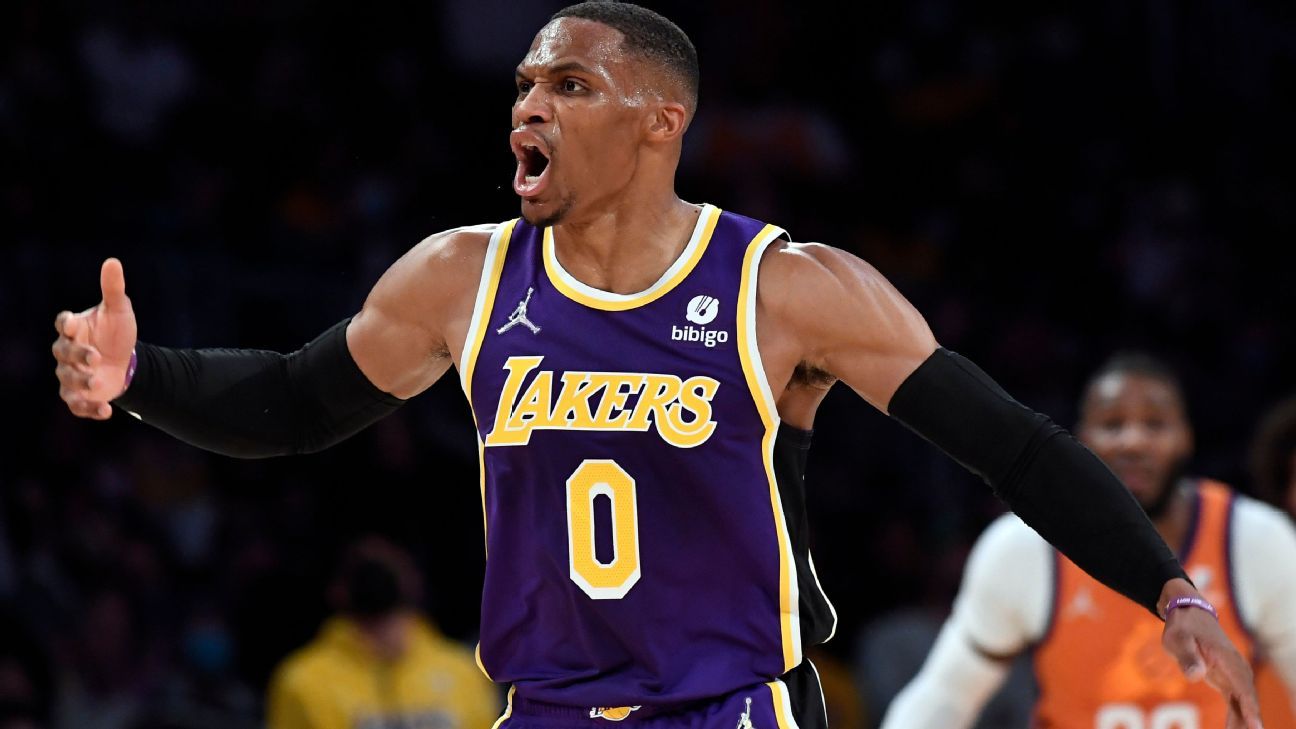 EL SEGUNDO (Calif.) -- While the Los Angeles Lakers' new look has encouraged patience, a winless exhibit slate, a few injuries, and now a 0-2 regular season start -- which included tensions boiling over after Friday's loss against the Phoenix Suns -- would be a test for any team's resolve.
Russell Westbrook, a former league MVP, who Los Angeles spent a lot of money to acquire, stated that he's fine with the current uncomfortable situation the Lakers find themselves in.

After Saturday's film session, Westbrook stated that he was OK with adversity. "I don't panic during the course of a season. Particularly at the beginning of the season. It's not necessary. It's too long, and no one is winning anything right now.

It's great to feel good and get off to a positive start, but I also like to ensure that my season continues to be a success. As we get to know each other better, I want my team and my fellow teammates to be getting better.

Rajon Rondo said Saturday's film review was the longest since the group began to come together. He also stated that Frank Vogel's success in leading L.A. to the championship two years ago was due to the fact that it creates accountability and participation.

Rondo stated, "If Frank is not the only one talking in the room, he believes we are doing something wrong." "So, there are many people talking, from the coaches to the players. We go back and forth. We should not be arguing or chattering but rather to get to know one another. This is the best way to build chemistry on court.

Vogel described the meeting as "very healthy" in advance of Sunday's home match against the Memphis Grizzlies.

Vogel stated that there was a lot of discussion. "A few really helpful discussions to try to bring clarity to some coverages that are breaking down on. "... Today was a day of great growth for us."

The Suns' loss was difficult to digest. Los Angeles was only 39.5% in team shooting. It missed 12 shots and was outscored 52-26 by Phoenix's paint team. The defense also gave up an astonishing 71 points to Phoenix over the second and three quarters. Phoenix finished the game with a 48.8% team score.

"Guys are learning how to run with and play a little faster. Westbrook explained that he is still learning how to do other things and move off the ball. He averaged 11.5 points per game on 35.7% shooting in the first two games. "I'm okay with the struggle of trying to figure it out, and making sure that we are in the right position to do what is best for us so that we can play our best basketball at the end the year," Westbrook said.

Shortly before halftime, the team disregarded any residual impact of the dispute between Dwight Howard & Anthony Davis.

Westbrook stated, "It's over and we move onto the next game."

The Suns game was not without its own drama. Rondo and a fan on the courtside were involved in a dispute that lasted until the third quarter. We will go into more detail about this incident.

Rondo declined to talk to reporters after the loss. He did not reveal what the fan had said, but he did say that it was enough to make the point guard want to "get him out of the game."

Rondo gestured to the referee and pointed at the fan. It was clear that he made his left hand look like a gun when he did this. Rondo reached out to the fan and held his hand close to his face. He could have been interpreted as imitating a trigger. The fan then pushed Rondo away, and Staples Center security quickly removed him from the arena.

Rondo answered "No" when asked if he intended to show his hand as a gun.
russellsluggishgamefanunfazedpanicrondoseasonimbetterlonglosteamsunssurewestbrookstartlakers
2.2k Like