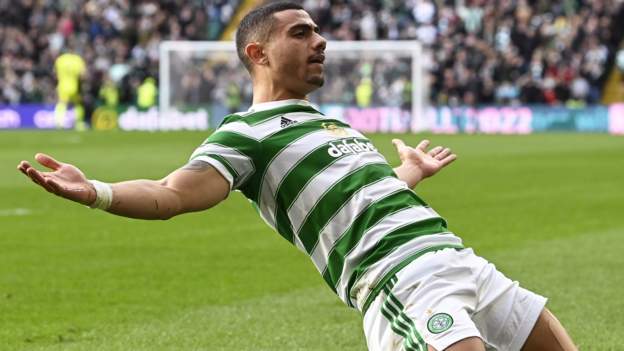 Giorgios Giakoumakis made his debut with his maiden goal, as Celtic defeated stubborn St Johnstone in Scotland Premiership to extend their winning streak to four.

Celtic won a well-deserved victory thanks to Josip Juranovic’s penalty.

The hosts remain fourth, one point behind leaders Hearts and Rangers, who will face St Mirren on Sunday -- and Dundee United.

Giakoumakis was a summer addition from VVV Venlo and was unassisted from the beginning after impressing in the Europa League victory over Ferencvaros. This was his third appearance off the bench.

St Johnstone was able to marshal the 26-year old and Celtic until Booth's error ended all their diligent defense.

Juranovic's shot from the distance was a hopeful one. Booth missed his attempt to clear it. Anthony Ralston squared for Giakoumakis, who volleyed past Zander Clark.

It was a relief for the hosts, but a dejection for St Johnstone who had just welcomed back defensive lynchpin Liam Gordon after he suffered an injury and made his first appearance since August.

The hosts were unable to penetrate the walls until Giakoumakis intervened.

Kyogo Furushashi was deployed wide right to support the Greek forward in central striker position. Jota, on the opposite flank, was the most active performer for Celtic.

St Johnstone emerged with new energy after the break. Jamie McCart moved over from a corner, and Cammy McPherson was slicing high.

McGregor was able to deflect a McGregor drive inches wide. However, Celtic quickly regained control. The hosts had few clear chances until the final stages.

Jota and Kyogo teamed up and Japan's forward, who had moved centrally following Giakoumakas' departure, was caught by Gordon just inside of the box. Clark was sent by Juranovic in the wrong direction from the penalty spot.

McGregor and Tom Rogic had their drives stolen by Clark. McGregor also received a shot from substitute Mikey Johnston at the post, which saved St Johnstone further damage.

Jota is the Man of Match

Every week, the case of the on-loan Benfica winger for a permanent Celtic stay becomes stronger

After a chaotic start to AngePostecoglou’s tenure, Celtic have their key players back and are building momentum.

Giakoumakis' goal will boost his confidence as he seeks full fitness. Juranovic, a Croatian defender, showed his quality after a four game absence due to injury.

Celtic have won three consecutive league matches, while St Johnstone have lost three of three and scored just one goal in all four.

Davidson's team will regret the defensive lapses at both goals. However, they were solid for most of the match and lacked threat at the other end.

Gordon's return back to the heart and defense offers hope for a revival with three of the Perth men’s next four league fixtures at their home.

Both sides will be in Premiership action against Edinburgh opposition Wednesday night (19:45 BST). Celtic is away from Hibernian, while St Johnstone hosts Hearts.