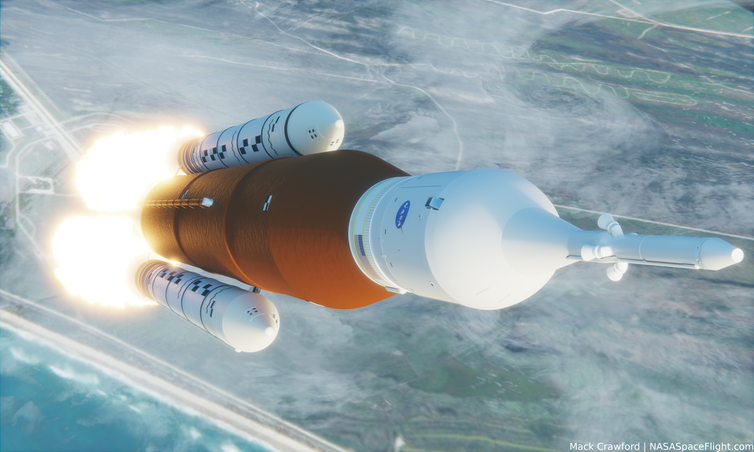 CAPE CANAVERAL (Fla.) NASA plans to launch its next megarocket, the Space Launch System, in the early part of next year.
NASA officials announced Friday, Oct. 22, that the behemoth moon rocket is now possible to fly February 12 if final testing go well. It was originally scheduled to launch in November, but it could fly as early as February 12. They said that this is when the first window for the uncrewed Artemis 1 mission to the moon will open.

NASA's Space Launch System (or SLS) is a rocket that NASA is building to carry astronauts to Mars, the moon and other distant locations. It is part of its Artemis program which seeks to send astronauts back there as soon as 2024 in order to establish a long-term, sustainable human presence around Earth's closest neighbor.

It consists of the Orion crew capsule and the SLS rocket. Engineers stacked the crew capsule on top of the 322-foot-tall megalauncher in High Bay 3of High Bay 3of Kennedy Space Center's Vehicle Assembly Building (VAB). This marked a significant milestone for the agency as well as the end of the countdown to launch.

The duo will fly together the first mission of NASA's Artemis lunar program. It's part of an uncrewed orbit around the moon, which is scheduled to launch in the early next year. Artemis 1 is expected to launch in February 2012.

"Completing stacking was a really important milestone," Mike Sarafin (NASA's Artemis 1 program manger) stated during a Friday news briefing to discuss the program’s progress. It shows that we are on the right track to achieving the mission.

At the same briefing Tom Whitmeyer, NASA Headquarters deputy associate administrator for exploration system development, explained to reporters that the crew capsule and rocket were now stacked. They will then roll out to Launch Pad 39B in December for testing. This will be followed by a fueling exercise called a wet dress rehearsal in January.

He said, "After the wet dress rehearsal, we will return to the VAB to complete more checkouts and then roll out to the pad once more."

Whitmeyer said that "Artemis 1" is the first step to landing the first woman and first person of color on Mars.

The path to launch

The SLS was developed by engineers from NASA centers around the country. Most of the hardware was assembled and tested at NASA's Michoud Assembly Facility in Louisiana and Stennis Space Center, Mississippi.

A core stage powers the rocket, which sits atop four RS-25 engine (the same type used on the spaceship) and two solid rocket boosters that generate 8.8 million pounds of thrust.

Hot-fire testing was used to ensure that the rocket's components worked properly. This year, the core stage and four main engines were ignited twice. The first attempt, on Jan. 16, was prematurely ended as the engines stopped working just over a minute following ignition.

Investigators discovered that the early shutdown was caused by an anomaly in the hydraulic system of one engine. The system had apparently exceeded safety limits in one parameter and triggered a shutdown. NASA decided to redo the test before shipping it to the launch location in March.

After arriving in Florida, the SLS was taken to High Bay 3 within the Vehicle Assembly Building. This is the same building that NASA engineers built the Saturn V lunar rocket. Crews have been diligently assembling the rocket's various systems and culminated in the topping of the vehicle with the Orion crew capsule earlier in the week.

The Orion spacecraft, which will fly uncrewed to orbit the moon in just a few months, is being attached at NASA's Kennedy Space Center in Florida to the Space Launch System rocket. NASA Image Credit: NASA

The path to the pad

After completing checkouts at the launchpad later in the year, the SLS will return to the launch pad in January for the final major test before launch: A wet dress rehearsal. The test is essentially a fueling test and the final check of the rocket's ground systems. NASA's launch team will thus load the vehicle's cryogenic fuel (liquid oxygen and hydrogen) into the upper and core stages.

From launch day preparations to liftoff, the teams will go through them. After the launch, the rocket will be returned to its huge hangaro in preparation for its launch date. Sarafin stated that the 15-day window for launch is available starting February 12.

The launch target must be met. If it is not, that will pose a major challenge to NASA. TheSLS will arrive at the pad six days before its scheduled liftoff on February 12. NASA has a 21 minute launch window that opens at 5:56 PM EST (2256 GMT) on the day. Other opportunities vary day-to-day. Sarafin said launch windows can be modified by up to a minute depending on the trajectory analysis.

Sarafin said that each launch window can last anywhere from 10 minutes to two hours. The first launch period runs from February 12 through 27. There are also additional opportunities in March, April and May. Each period is open for approximately two week.

He said, "We're here for approximately two weeks, then we're gone for about two more weeks."

Sarafin answered questions about the reasons for the wide range of launch windows. He said there were two major factors. One, the location of the Earth and moon. Two, Orion's daylight splashdown.

During the briefing, he stated that "[the launch window] really has something to do with three-body problems that we're facing with." "We have the Earth spinning on its axis. The moon is moving around the Earth in its lunar cycles. Then we have to head outbound and then splash down in daylight landing conditions.

This is not all. Sarafin says that the length of the mission will vary depending on when SLS launches. The Artemis 1 mission will run approximately six weeks if it is able to get off the ground in the first half of its launch period (Feb. 12-27) compared with four weeks later in the month.

The Artemis 1 mission's goal is to test the launcher-capsule system before its second flight and first crew launch, Artemis2. The launch is expected to take place sometime in 2023, but it will not land on the Moon. It would orbit the moon, setting the stage for a lunar landing shortly thereafter.

Sarafin stated that the Artemis 1 mission will also test Orion's ability to return from the Moon in lunar reentry conditions. It will also provide engineers with data about how the vehicle works while in space. Orion will transmit this data via the Deep Space Network. Orion also has the ability to take amazing selfies with the help of a few cameras mounted on the spacecraft’s solar arrays.

Sarafin stated that Orion will take selfies of its self, and we'll be able to see the moon in background and far off in the distance. "We will see the Earth from 270,000 miles away and gain a fresh perspective for Artemis Generation."

The Orion capsule will be carried by the SLS rocket, along with 10 cubesats. These small satellites will carry a range of tasks, including studying the effects deep-space radiation has on yeast DNA and flying by Near-Earth Asteroids using a large solar sail.