England v Northern Ireland: 'We're not afraid of anybody' 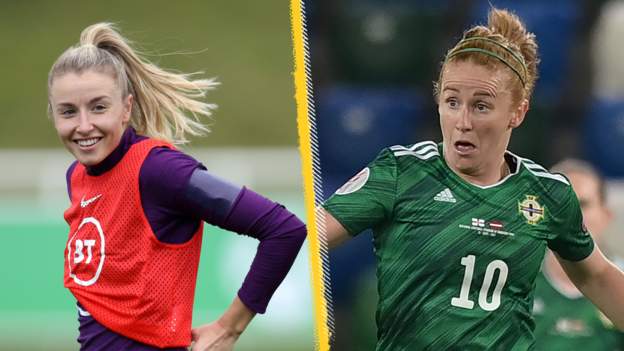 Manager Kenny Shiels claims that Northern Ireland is "not afraid" of anyone as they attempt to upset England at Wembley.

Shiels is confident that his team can win Saturday's World Cup qualifier, despite being 40 places lower than the Lionesses.

He stated that "We are the only European team to have won six competitive games in a calendar year." We are in a good position.

"We don't fear anyone." We will beat anyone who comes our way.

Shiels believes that the Irish will bounce back from February's 6-0 friendly defeat by the Lionesses and not let it get to them.

The 65-year old said, "It's an atmosphere that people talk about crossing a white line."

"We must make sure that we don't use the fantastic facilities or arenas we are playing in.

Shiels isn't worried that the two Northern Ireland women who are part of the Women's Super League won't be able to play on Saturday.

Simone Magill, Everton's striker, is currently unavailable because of a family tragedy. Rebecca Holloway, Birmingham City's defender has been injured and has since withdrawn from the squad.

After recovering from a knock, Crusaders Strikers forward Emily Wilson will be available.

Shiels said: "We are all a team and number one, number 23 and number 24 are all treated the exact same way and can offer the same amount. We have to replace two players who we lost. It's not a problem."

"I expect a more difficult game"

Sarina Wiegman, England manager, is anticipating a stronger opponent in Ireland after scoring 18 goals and conceding none in their previous two matches.

She stated that "We shouldn’t underestimate anyone we face, but we can anticipate what to expect." They expect to be able to possess the ball a lot. However, they do have some strengths that are still growing. They did well in the qualification round's first two games.

"I'm expecting a tougher game than what we had last month. It is great to know that Northern Ireland has qualified for the Euros. They've been in transition for a while. "I'm excited to play in the game."

Wiegman confirmed that her 24-strong team is fit for the Wembley match - the first competitive fixture of the Lionesses at the national stadium.

Williamson, 24 years old, wore the armband last month for the first-time in the thumping 8-10 and 10-0 victories over North Macedonia (in the absence of Steph Houghton),

Wiegman stated that she has yet to decide on a permanent captain.
northernenglandanybodyvgamesexpectsquadlionessesirelandplayafraidwonwiegman
2.2k Like